Spinning wheels: Though the city has answered calls for safer streets, Pittsburgh remains stalled on bike lanes in Oakland 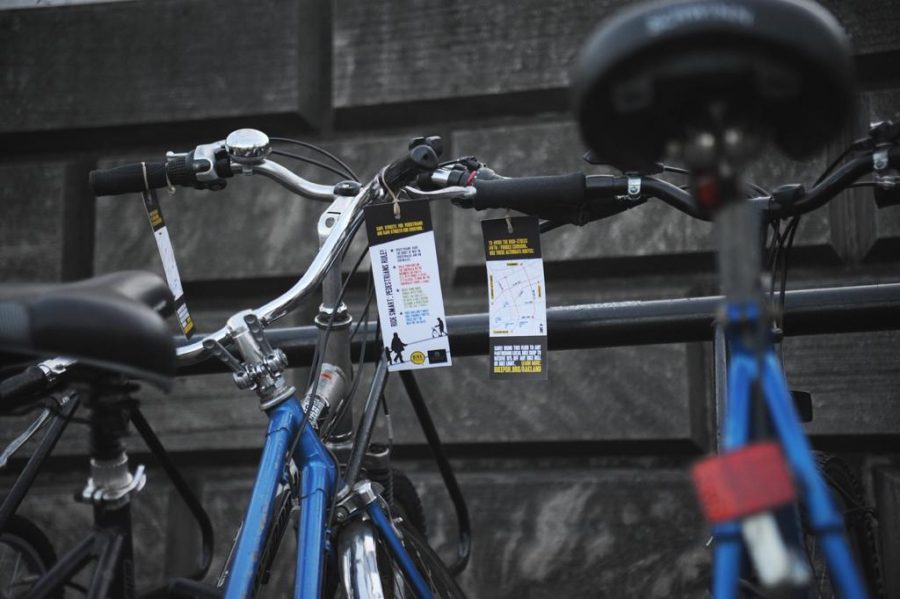 By Elaina Zachos and Zoë Hannah / The Pitt News Staff

First, a black Jeep crashed into cyclist Dan Yablonsky in Lawrenceville in 2012, shattering his hip, arm and leg and sending him into a five-month-long coma.

Then, a mini-van hit and abandoned biker Sage Ziviello, a student at Chatham University, in Shadyside in 2013, leaving her with hip injuries that she can still feel when she waits tables at her job.

And just over a month ago, Pitt adviser Susan Hicks was killed on her bike after getting pinned between two cars along Forbes Avenue.

After 2012 saw 104 cyclist crashes in Allegheny County, Hicks’ recent death — along with statistical proof that the number of bike crashes aren’t decreasing — has ignited the community’s calls for more comprehensive bike lanes in Oakland. Mayor Bill Peduto supports installing bike lanes as a safety and economic boost in the long term, but many advocates call for more immediate solutions to the lethal problem, such as an increased focus on speed control.

The Pennsylvania Department of Transportation reported 86 bicycle crashes in Allegheny County in 2014, and 19 cyclists died in crashes across the state that year. There are no current statistics for the number of bike crashes or deaths in Oakland.

Pitt student Gregory Dornseif walked past Forbes and Bellefield avenues 15 minutes after Hicks’ crash, in the midst of the aftermath.

“It really hits home,” Dornseif, a sophomore marketing and finance major, said. “And then you read it’s a faculty member at Pitt … I just felt like something needed to be done.”

The petition garnered 2,504 signatures in five days, and closed by Oct. 28. In response to the signatures, Peduto’s spokesperson told The Pitt News in October that Peduto had fast-tracked the city’s existing plans for adding bike lanes in 2017 to 2016.

But that fast-tracked plan is grid-locked in red tape, any progress struck with two flat tires.

As the business and education program coordinator of  advocacy group Bike Pittsburgh, Yablonsky was already deeply involved in the bike community during the time of his near-death crash.

“This has to stop,” Yablonsky said. “No one should be a victim to assault like I was, just by getting around.”

The city installed bike lanes Downtown to kick-start economic development in the Cultural District and partnered with People for Bikes, a national biking nonprofit, on the Green Lane Project.

The Project added bike lanes on Schenley Drive, O’Hara Street, Bigelow Boulevard and Bayard Street between 2014 and 2015. With those additions in progress, plans to streamline Oakland’s busiest streets have stalled since 2013, when the city proposed a $6 million Bus Rapid Transit corridor.

The BRT would redesign roadways from Downtown through Squirrel Hill on Fifth or Forbes avenues. The city submitted a nearly $4 million funding application about six months ago to the Southwestern Pennsylvania Commission, the city’s regional planning agency.

The Commission’s Congestion Mitigation Air Quality committee is currently reviewing the application and will decide whether to fund it by the end of the year. Planning would begin in 2016, but construction wouldn’t begin, according to Saunders, for another year.

“2017 is the earliest we could work on Fifth and Forbes between Oakland and Downtown,” Saunders said. “We need this year to engage [stakeholders’ interest] in the corridor.”

Getting unanimous support is complicated, as the city owns Fifth Avenue and PennDOT owns Forbes Avenue.

“Road ownership, the BRT process and the complications of the geography and existing road uses are major challenges to overcome,” Cessna wrote in an email.

The Pennsylvania Department of Transportation, Port Authority, the Oakland Planning and Development Corporation, Allegheny County and local universities all have a say in the layout of the area’s streets.

Many of these voices came together at a Dec. 1 presentation on the Complete Streets Coalition, a program to design roadways that are safer and more accessible to nonmotorists. More than 200 people filled the seats in Alumni Hall’s ballroom to hear about Pittsburgh’s transportation redesign.

“The foundational question for Complete Streets is how this works toward safety,” Ray Gastil, director of City Planning, said at the meeting.

The presentation took place at the central-most point of the bike lane debacle: Pitt’s campus.

Earlier this semester, Pitt’s Student Government Board formed a Bike Safety Task Force that will distribute brochures to educate people on bike safety. SGB is also seeking SORC certification for a new club, the Pitt Bike Collective, which would advocate for bike lanes.

Paul Supowitz, Pitt’s vice chancellor for community and governmental relations, said the University will paint bike lanes in the plaza between Hillman Library and Posvar Hall over the next few weeks.

“[Pitt is] adding to the chorus of voices that says we need to add sorts of transportation here,” Supowitz said.

But Pitt isn’t coordinating with the city about installing bike lanes in Oakland, according to Saunders, and the relationship between bikers and motorists remains sour.

“There are people that seem to be offended by the fact that you’re on a bike,” Andrew Konitzer, who bikes to work at the Center for REES, said.

“We have a road system in this country that was designed for a car,” Atherton said. “Our roadways are still dangerous by design.”

According to People for Bikes, streets with protected bike lanes — lanes that use cars, posts or plants to separate bike lanes from roadways —  see 90 percent fewer injuries per mile than those without bike infrastructure.

Saunders said Pittsburgh has 2.62 miles of protected bike lanes. It has 39.12 miles of bike lanes across the city, and 1,298 miles of roadways within city limits.

Matt Bauman, a graduate student studying bioengineering, gets paranoid when cars stop behind his bike at red lights. Hicks’ death was an ugly reminder for the cyclist and validated his growing safety concern.

“I definitely don’t feel as invincible as I did 10 years ago,” Bauman said.

In November, Bauman recorded 10 minutes of Friday afternoon traffic on Forbes Avenue with his cellphone from the top of the Cathedral of Learning. Using the video and open-source software, Bauman found that about half of the cars on the road were speeding.

“I really think that there are small steps that can be taken … that [aren’t] going to cost the city millions of dollars,” Bauman said.

Kristin Saunders said the BRT project is “complicated.” The city is juggling the Port Authority’s interests with the needs of other influential businesses, institutions and organizations, some of which make up Pitt’s Oakland Task Force.

And some cyclists, like Peter Trachtenberg, a professor in Pitt’s English department, have mixed opinions on bike lanes.

After a car clipped Trachtenberg on his bike in Lawrenceville, he spent six weeks using a cane.

Still, Trachtenberg said, “You can have bike lanes, but if a [motorist] has to make a right turn, he has to go … into the bike lane.”

The BRT’s hypothetical solution to Trachtenberg’s criticism is cycle track alignment, which would install barriers like poles, plants or curbs to separate bike lanes from cars on the road.

Justin Miller, the city’s senior planner, said the BRT is more likely to nix parking on Fifth, where there are not as many businesses, than parking on Forbes.

The project is progressing slowly, because the city wants to “[get] this right,” Miller said.

“If you’re really going to make a transformative change,” crash survivor Yablonsky said, “You really need to step on it.”