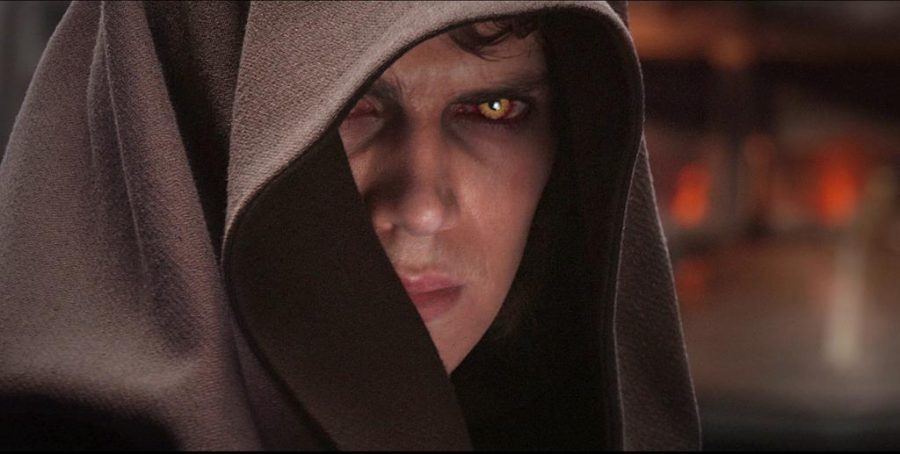 KRT WHAT'S NEXT STORY SLUGGED: TRIVIA KRT HANDOUT PHOTOGRAPH (May 10) Anakin Skywalker (Hayden Christensen) turns to the dark side of the Force in "Star Wars: Episode III Revenge of the Sith." (jt) 2005

But by demanding Episode VII, we — the fans — are at risk committing worse damage than Lucas’ influence.

Don’t get me wrong. I’m excited.

I haven’t seen a Star Wars movie in a theatre since I was a little kid experiencing Episode III with my mother. The prospect of reliving that excitement is exhilerating — mainly because the phenomenon of Star Wars transcends generations.

Pop culture universally celebrates the Star Wars franchise — it boasts a large and well-networked fan community that participates in everything from fan films to re-enactments. Even if people often bemoan the prequels, most still cling to the series as a whole — and for good reason. The six Star Wars films tell the life-long story of Anakin Skywalker, from his childhood to his death. It’s a perfect and complete tale, but the addition of sequels risk ruining this sense of completeness.

Star Wars is an episodic space opera with an expansive and thoroughly detailed universe. It’s epic on a grand scale, yet it stays focused on its one true main character. No, it’s not Luke Skywalker, it’s not Obi-wan Kenobi, but Anakin Skywalker — the Chosen One, the prophesized Jedi destined to bring balance to the Force.

The story of Anakin’s life spans the six films, from his times as a mere child slave on Tatooine, to when he fulfills his prophecy as a Jedi knight. He goes through Jedi training, raised by Obi-Wan — his Jedi master who acts more like an older brother figure.

Spoiler alert: Anakin eventually finds fault with the Jedi’s moral code and begins to see them as corrupt political figures, as they refuse to allow him to find love or attachment with others. Seeing a prophecy that his love, Padmé Amidala, will perish in childbirth, he seeks the illegal power to stop death itself — a power told to him by the evil soon-to-be emperer, Palpatine.

The desire to save Padmé ultimately causes him to turn to the Dark Side — becoming Darth Vader in the process. He never saves Padmé, but she does give birth to Luke and Leia. His encounters with his children in the following films will help to finish the cycle. They help him feel love again, and he kills Palpatine, the Emperor of the Sith, to save his son Luke — thus, fulfilling the prophecy told to us six movies ago.

Darth Vader started off in the original trilogy as a borderline faceless villain that turns back to the righteous side at the final climax. He has very little screen time and serves more as a symbol of the empire than a true character of his own, at least until “Return of the Jedi.” However, when you look at the original trilogy in the context of being a continuation of the prequels, he becomes a character that fluctuates and has feelings. His passion causes him to react to what he sees as a betrayal by the organization that raised him. No longer do you think of just the mask, but you see the little slave boy behind it as well.

Vader brought balance to the force by killing Palpatine, the last Sith. It’s a beautiful journey to go on and is reminiscent of ancient epic tales of heroes such as Odysseus and Hercules. However, with the release of the sequels, things are at risk to change. Anakin, after redeeming himself in his son’s eyes in Episode VI, dies peacefully without the mask. He isn’t around anymore. His ghost appears at the end of the film during the Ewok celebration, smiling and finding a home with the spirits of Yoda and Obi-Wan, finally at peace. So, who are the next three films going to be about?

Luke, Leia and Han Solo are returning to the new film, and that offers a bit of continuity for the transition into the new trilogy. The problem is, it’s not their story. The series is continuing on without its main character and is instead content to offer side characters as a substitute. It’s the equivalent of writing “Great Gatsby II” and claiming that it’s OK because Tom Buchanan is now the protagonist.

Sorry, that just doesn’t cut it.

The only remedy to this situation that I can think of is for his spirit to help the next generation of fighters like Obi-Wan’s did during the Galactic Civil War in the original trilogy. But quite frankly, this idea is so campy and out-of-character at this point that it makes me ill to type.

In my mind, by reviving a series that by all accounts was finished, Disney has handed director J.J. Abrams an absolute mess.

Disney bought these movies and Lucas’ empire for one reason alone: money. That isn’t a deal breaker for me — greed is a powerful incentive for making great movies — but there needs to be vision at the core of it all. Films need an auteur, and hopefully Abrams can rise to the occasion.

The fan in me wants to geek out and blindly expect a great film with no issues, but the six films we already have and the grand narrative that they tell crushes my love. It’s finished. There shouldn’t be any more story to tell — yet here we are.

Maybe these films will recapture the splendor and pure beauty of the original trilogy. Or maybe the movie will leave fans looking for “A New Hope.”

Timothy primarily writes on free speech and media culture for The Pitt News.

Write to him at [email protected]