The case to land Star Wars in Pittsburgh 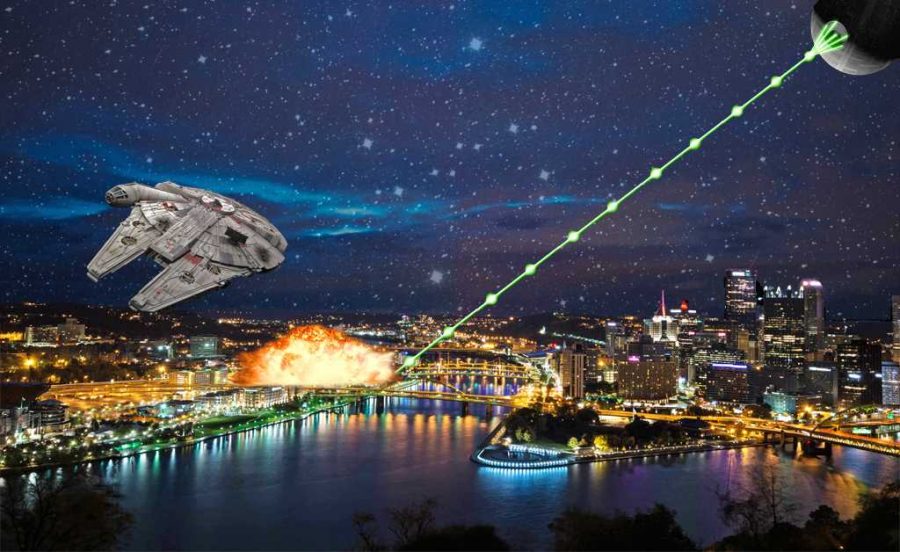 Pittsburgh has the potential to be the filming location for the next Star Wars movie. Jeff Ahearn & Nikki Moriello | Assistant Visual & Visual Editors

Who says Tatooine has to stay in a galaxy far, far away?

With the resurgence of the “Star Wars” franchise coinciding with Pittsburgh’s erupting big-ticket film scene, Steeltown seems as poised as any other American city to host the Millennium Falcon.

From the plethora of abandoned industrial relics to the long, winding rivers, Pittsburgh has a lot to offer the thrilling galactic series, if only for exterior clips. The forsaken industrial structures that sit abandoned alongside the Monongahela River could provide plenty of harsh and rugged scenery.

Past American set locations have included Oregon and California woods, while much of the original trilogy’s production took place in London studios. With modern-day CGI capabilities, though, producers could reimagine the Rust Belt’s industrial ruins as an intergalactic space pub or vessel.

Kathleen Murray, a member of Pitt’s film and English departments, said Pittsburgh could be a habitable environment for the franchise, even if that means hiding the iconic bridges and architecture.

“It would be especially important not to be identifiable specifically, as that would ruin the magic, so all the marvelous iconic buildings and bridges couldn’t really be used,” Murray said. “But the industrial detritus is so evocative without being too site specific, especially abandoned works outside of town.”

Industrial relics like the Carrie Furnace in Braddock feature abandoned steel furnaces, warehouses and factories where filmmakers could shoot gritty and rugged settings, like Anakin’s junkyard abode in “The Phantom Menace” or Yoda’s bungalow shack in “The Empire Strikes Back.”

Will Zavala, an associate professor with Pittsburgh Filmmakers, said Pittsburgh could offer more than just abandoned warehouses and steel mills.

“[‘Star Wars’] is a mix between sleek high-tech and barren early industry,” Zavala said. “There’s places like 31st Street Studios in the Strip District, which used to be a steel mill. That’s the kind of space that special effects-heavy productions really like.”

Thanks to green screens and CGI, film and editing crews can shoot wherever they like, Zavala said, and then edit the shots to show what they need.

“Add a little here, subtract there, that’s how [movies like ‘Star Wars’] approach filmmaking,” Zavala said. “They shoot, grab the stuff they like and subtract out the rest.”

Zavala also said he was not concerned “Star Wars” would be too big a production for Pittsburgh. “Pittsburgh has proven itself with the ‘Dark Knight’ production,” Zavala said.

While Pittsburgh may not offer the desert wastelands appropriate for major scenic locations like Tatooine or Hoth, Murray said the city could host smaller scenes.

“Realistically, I don’t think it would be possible to shoot an entire film on the scale of ‘Star Wars’ in Pittsburgh.  We simply do not yet have the resources to support a production of that scope,” Murray said. “However, ‘Star Wars’ in particular always uses a lot of locations, and there is no reason on earth that Pittsburgh couldn’t be one.”

“Star Wars” would be the biggest franchise to choose Pittsburgh as a filming location, but it would join a long list of feature films shot in the area, including “The Dark Knight Rises,” “The Silence of the Lambs” and “Adventureland.”

Lisa Smith-Reed, assistant director of the Pittsburgh Film Office — a nonprofit economic development agency that works to promote Pittsburgh and southwestern Pennsylvania to the film industry — said filming in the area has had an economic impact of over $1 billion since the agency’s founding in 1994.

Will Zavala added that film crews usually film for about six to eight weeks, which is enough time to do some serious spending.

“There’s a great demand for lodging, food, supplies, transportation,” Zavala said. “Usually since there’s so many people, it’s cheaper for [film crews] to just go out and buy something than to make it or shop around.”

While the Pittsburgh Film Office works to attract projects to the region by offering a 25 percent tax break for projects spending at least 60 percent of their production budget in-state, the looming state budget problem may undo some of that work.

Despite the political barriers, though, to Murray, Pittsburgh offers a habitable environment for production teams, actors and crewmembers alike.

“Each film that gets shot in Pittsburgh expands the possibilities for the next film,” Murray said. “Rent is a lot cheaper here, as is talent. It also becomes a wonderful opportunity for folks starting out the be involved in a way that might not be possible in LA.”