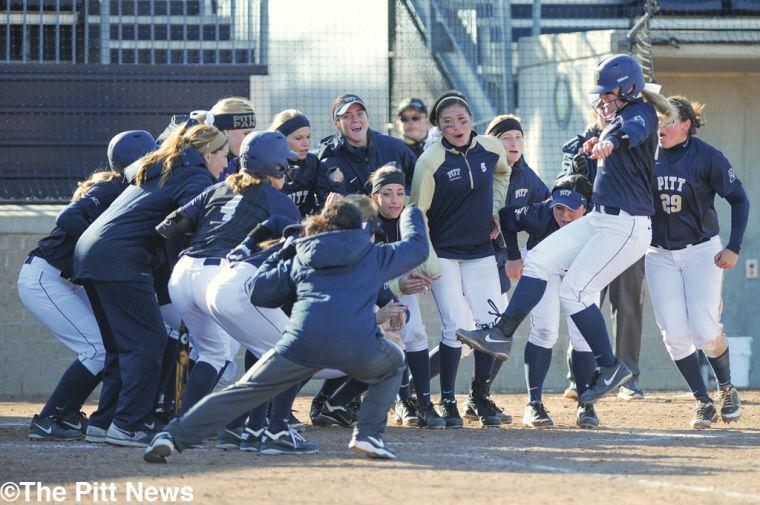 The Pitt softball team wraps up its five-game homestand Tuesday night with a doubleheader against city rival Robert Morris. The Panthers are coming off a weekend sweep of ACC opponent Virginia that gave the Panthers their first-ever wins in their new conference.

Thanks to her big weekend, infielder Maggie Sevilla was named the ACC Softball Player of the Week.

“We’re really excited about what we are doing here,” Sevilla said.

First pitch for game one against Robert Morris (14-14, 0-1 NEC)is set to be thrown at 3 p.m. with the second matchup following right away at 5 p.m.

The Panthers’ (11-14, 3-5 ACC) sweep of ACC opponent Virginia comes at a great time for the team. Prior to the weekend series, Pitt was forced to cancel its last four home games.

Despite the weather-related issues the team has faced, Pitt came out swinging last weekend. Against Virginia, the Panthers outscored the Cavaliers 26-12.

After the top of the first, Pitt had fallen behind 2-0 before the Panthers’ bats came alive as they went on to score 10 runs on 10 hits. Nirschl went 2-2 in game one, recording two RBIs and scoring three times, while Maggie Sevilla went 2-3, scoring two runs and hitting two RBIs.

Nirschl and Sevilla continued to be successful at the plate in game two as the Panthers won 9-4. Nirschl added two more hits and three RBIs. Sevilla went 3-4 in game two and drove in three more runs.

Along with Nirschl and Sevilla, Jordan Fannin produced for the Panthers. The three players, batting in the top three slots of the team’s batting order, tallied seven hits, six RBIs and five runs.

Nirschl said her team did an “awesome job” at the plate over the weekend.

“In both games, we got behind a little in the first inning, but we did a great job of brushing it off and allowing ourselves to do what we know how to do.”

In the series finale, Pitt showed it could also come back when the Panthers needed a late rally.

Kramer hit a clutch solo home run to tie the game at 6-6 in the bottom of the seventh. The Panthers then loaded the bases before Nirschl was hit by a pitch to walk home the winning run.

Head coach Holly Aprile said “it was great to see us fight back for this victory.”

On top of hitting well as of late, Pitt’s pitchers have been dominant on the mound. Minus a few first-inning hiccups, the Panthers’ pitching staff has performed well.

In game one of the Virginia series, Savannah King (6-10) cruised to a win. Through five innings, King surrendered four hits while striking out two and walking two batters.

Alexa Larkin got the start in game two and pitched a complete game for the Panthers. Larkin recorded seven strikeouts while giving up five hits and one earned run.

Larkin came in to relieve King in game three and secured herself her fifth win of the season. In 2 2/3 innings, Larkin gave up two hits while striking out five.

While Pitt is riding a three-game win streak, the Colonials are looking to halt a short losing skid in its tracks. Robert Morris has lost its last four matchups and was shut out in two of those losses.

In that stretch, the Colonials have been outscored 11-2. Their last game was a 5-0 loss against Saint Francis (Pa.).

The Colonials also have a strong starting pitcher in Nicole Sleith, who has posted a 1.19 ERA while going 9-6 so far this season. She has pitched 15 complete games and has struck out 156 batters.