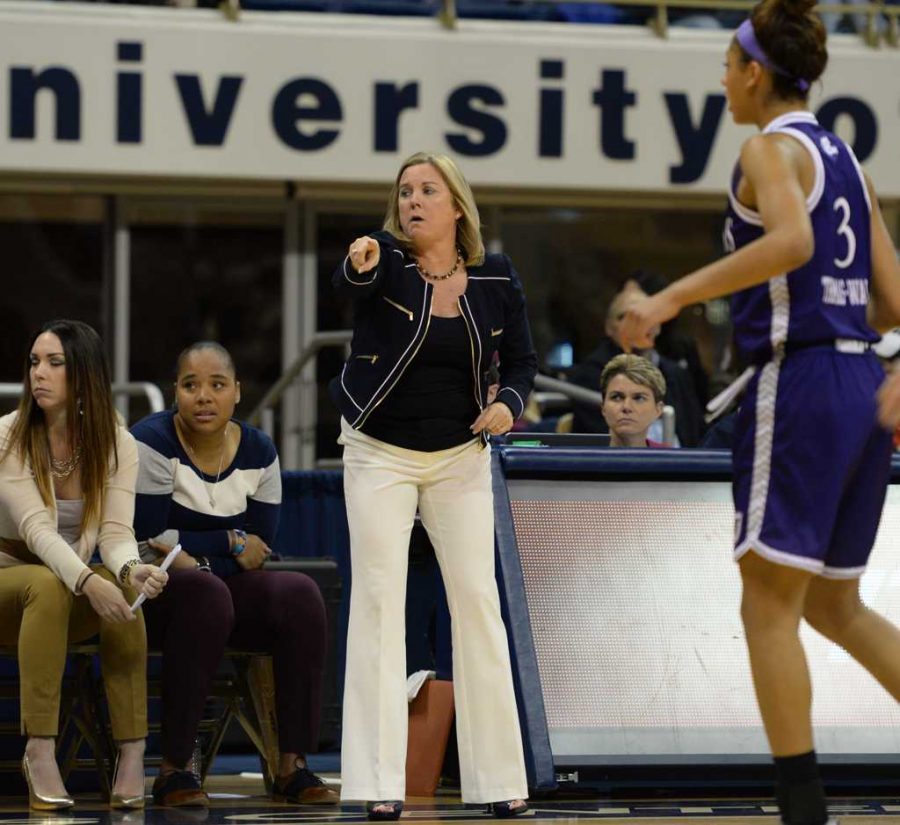 Suzie-McConnell Serio and the Pitt women's basketball team are looking to bounce back after a disappointing 13-17 season. Wenhao Wu | Senior Staff Photographer

Before the season began, no one knew how the Pitt women’s basketball team would respond after losing star point guard Brianna Kiesel to the WNBA.

After opening its schedule on a four-game win streak, the team has struggled in the last 10 contests, dropping six games, including its first conference matchup. While the verdict on the post-Kiesel era isn’t clear yet, the team is beginning to find its new, youth-infused identity. Although only a couple conference games in, here’s what we’ve learned after almost hitting the midpoint in the season.

McConnell-Serio has re-energized the Pitt program and generated some optimism in just two years. One thing is abundantly clear — other coaches will rarely outmaneuver her.

Playing in a deep and talented conference, the young Pitt team has often faced more skilled players when it takes the court against other ACC teams.

But even with its overwhelming inexperience, the team is consistently in a position to compete thanks to a superb coaching staff. McConnell-Serio plays no favorites and manages her team with precision, making sure that regardless of age, her best athletes are on the court at all times, giving the team its best chance to win.

2. Their inexperience is a strength

Despite being a heavy underdog on their own court against No. 3 Notre Dame, the Panthers showed no fear when taking on a national powerhouse. McConnell-Serio has put together a group of women that has tasted success, and their on-the-job training has translated into a brimming confidence that the Panthers can compete in every game.

The recklessness that has accompanied the team’s youth is one of its strongest assets, resulting in physical, stifling defense that forces turnovers. Sophomore Stasha Carey ranks third in the ACC with 1.93 blocks per game, and the team’s shooting defense stands at fourth in the conference.

3. Aysia Bugg is more important than you may know

Bugg only had one year of court time alongside Kiesel, but her play in her sophomore season mimics elements of Kiesel’s game. Bugg, a sophomore from Chicago, is the primary ball-handler and is responsible for pushing the Pitt offense. She hasn’t blossomed offensively yet, but in her second season, she’s averaging 7.5 points per game while leading the team in assists.

Her ability to penetrate opposing defenses has resulted in open looks for freshmen bigs Kalista Walters and Brenna Wise, and against Notre Dame, Bugg showed skill on the high pick and roll. It’s unfair to compare her game to Kiesel’s, but while she isn’t contributing at those levels, she’s already just as important.

After brilliant freshman campaigns from Bugg, Carey and Yacine Diop last season, it seemed likely that the team would need to once again lean heavily on the trio. While the three undoubtedly play a large role, the freshman frontcourt of Walters and Wise has shouldered much of the offensive load. Walters has been the more polished of the two, leading the team in scoring at 12.9 points per game, but Wise has shown upside on both ends of the court.

Despite only shooting 36 percent from the field, Wise has averaged 9.4 points and 7.1 rebounds per game halfway through her freshman season.

Thanks to her high motor, Wise frequently gets to the basket and creates plenty of space on the offensive side. While her inability to finish has resulted in poor shooting performances, a positive regression could be in her near future. If Pitt is going to seriously compete in the ACC, these two will have to keep shining.

5. The bench is still a soft spot

One of the biggest challenges the team will face in conference play is finding more consistent bench play. Despite three reserve players averaging nearly 15 minutes per game, the results thus far have been less than ideal.

Inconsistent shooting from junior guard Fred Potvin has given the team one less offensive weapon and has forced Pitt to play with no real true shooting threat from outside.

The Panthers have called on freshman Kauai Bradley frequently, who has flourished from beyond the 3-point arc, making only one less three than Potvin in 22 fewer attempts. But her role is likely to increase the defensive pressure as she has only attempted 13 3-pointers on the year.

Pitt will need to find a way to alleviate some of its scoring woes by finding points off the bench going forward, especially if it wants to make an impact during an arduous ACC schedule.