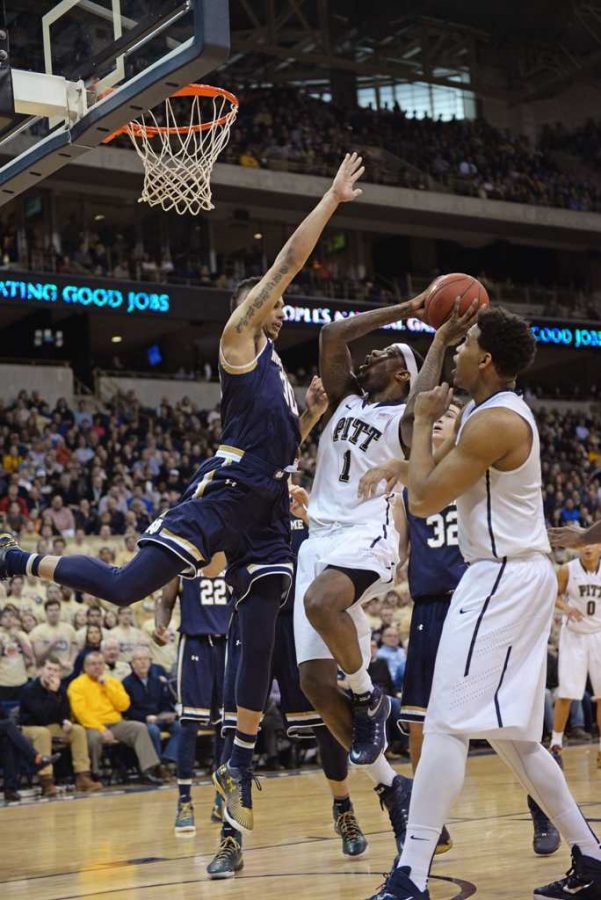 Sitting at No. 24 in the AP poll and 13-1 overall, the Pitt men’s basketball team appears ready for the road.

Leaving the Petersen Events Center for the first time since Dec. 20, the Panthers will enter South Bend, Indiana, with a nine-game winning streak and confidence.

Pitt head coach Jamie Dixon and players Jamel Artis and James Robinson spoke to the media in advance of Saturday’s 4 p.m. matchup at Notre Dame (9-4, 0-1 ACC), discussing the up-tempo offense, playing on the road and the new-look Fighting Irish, which lost some of its key talent from last year.

Pitt’s offense has been uncharacteristically high-functioning so far this season. The Panthers rank fifth in field goal percentage at 49.7 percent and third in the ACC in points per game this season at 85.3 — representing the team’s highest scoring effort in the Dixon era.

Artis attributes this partially to the free reign Dixon has given his players this year, which has led to faster play on offense.

“I think [Dixon] loosened up on our guys like myself,” Artis said. “He’s letting guys like me, James, the one, two and three push the ball up the floor. He loosened up on guys like us, and last year he didn’t do that, so I think doing that, we’ve got more freedom and we’re more confident.”

Dixon noted that the offensive efficiency is partly due to the team’s execution.

“Our big guys are faster than most of the guys in the ACC,” Artis said. “So they’re going to run, and we’re going to find them.”

Dixon said his personnel allows the team to work in transition more effectively.

Artis, who has seen varied offensive styles in his three years at Pitt, said the most recent version is more exciting.

“It’s actually fun. I like that style of play,” Artis said. “Pushing the basketball puts pressure on the defense. Like I said, [Dixon] has loosened up on us, and we’re able to play more freely.”

Even with the fast pace, the team has been incredibly efficient with the basketball, leading the ACC in assist-to-turnover ratios.

“You can play fast and make the right decisions at the same time,” Dixon said. “Obviously, we’re doing that.”

Fourteen games into the season, the Panthers have yet to play a game on the road, despite traveling to Okinawa, Japan, and New York City for neutral-court games.

Artis said he will embrace the hostile environment of an opposing team’s court.

“I’m actually happy to play on the road,” Artis said. “Our guys, we’re happy to go on the road and get a big win there and come back and celebrate. We’ve gotta take one game at a time, and we’ll be good.”

With four players on the roster that have yet to play in an ACC road conference game, Artis laid out some keys to playing in opposing environments.

“[You’ve got to] stay within yourself,” Artis said. “Don’t try to do too much. The crowd is gonna be loud, so we’ve gotta continue to talk to our guys and make sure everybody is on the same page.”

Dixon isn’t concerned with the team’s first road game coming this late into the season.

“A game in November doesn’t change who you are in January,” he said.

Tempering his excitement for the game, Artis is readying for some adversity on Saturday.

The Fighting Irish are missing two key cogs from the previous few iterations that Pitt has faced, as the team lost guard Jerian Grant and forward Pat Connaughton to graduation.

“It’s hard for them to replace Jerian, obviously. What he did last year for them was tremendous,” Robinson said. “This year they have other guys stepping up, and we’re going to have to be ready to defend.”

Still, the team’s point guard, Demetrius Jackson, poses a test for the Panthers, as he is one of the more athletic guards in the ACC.

Jackson is averaging 16.4 points, 3.5 rebounds and 4.9 assists per game this season.

“I remember we tried to recruit him,” Dixon said. “How quick, athletic, how hard he played were some of the things that stood out about him as a high school kid.”

Dixon said Jackson, a junior, has progressed throughout his college career.

Robinson is prepared for Jackson to assert himself, and also noted that junior forward V.J. Bechem, who averages 12.4 points and 4.5 rebounds per contest has caused opponents trouble.

“Obviously, Jackson is going to be aggressive,” Robinson said. “Beachem is stepping up big for them. We’re just going to have to be ready to go.”