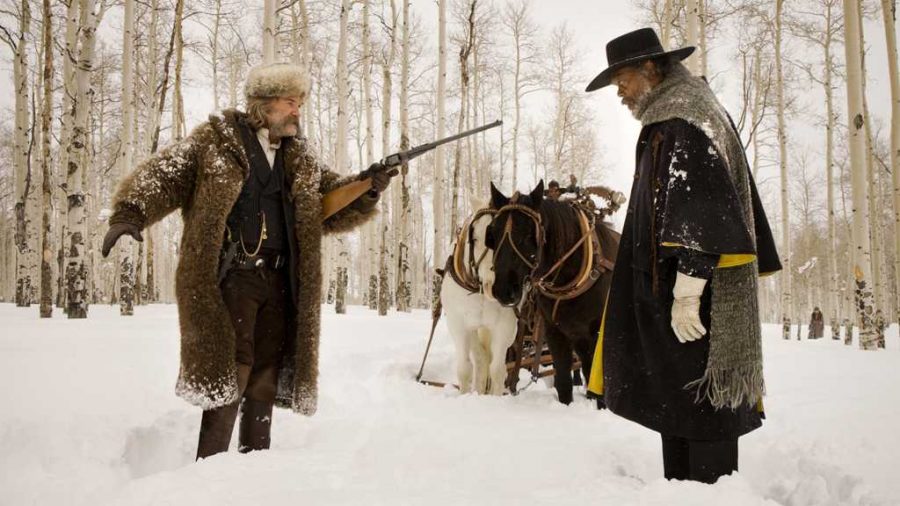 For as much as Quentin Tarantino delights in shocking, bloody spectacles, the director is a cliche of himself in “The Hateful Eight.”

The filmmaker’s usual — shock violence, rambling dialogue and hilarity via overt self-awareness — populates his latest work’s whopping three-hour runtime. By non-Tarantino standards, the Western is a sprawling, if disjointed pleasure. And although stacked with moments of his idiosyncratic genius, the film is ultimately a pointless project.

As much as I respect Tarantino shooting in 70mm format as a daring filmmaking choice and a nod to older moviegoing traditions, this choice almost feels like a counterbalance to this film’s simple and empty premise.

Though it appears to be a box film, nearly an hour passes before the important players are together under one roof. The film starts as John Ruth (Kurt Russell) is on his way to the town of Red Rock to hang his prisoner Daisy Domergue (Jennifer Jason Leigh). On the way he comes across fellow bounty hunter Major Marquis Warren (Samuel L. Jackson) and later Chris Mannix (Walton Goggins), who claims to be Red Rock’s new sheriff.

Their stagecoach arrives just in time to Minnie’s haberdashery in order to take shelter from an approaching blizzard. The crew of strangers — the refined Englishman Oswaldo Mobray (Tim Roth), the soft-spoken Joe Cage (Michael Madsen), the elderly Sanford Smithers (Bruce Dern) and Bob (Demián Bichir), a Mexican who claims to be taking over for the temporarily absent Minnie — grows larger upon their arrival. Distrust and the imminence of bloodshed soon turn the wheels of Tarantino’s latest character stew.

Tarantino molds conversations that almost surgically mount tension while facilitating amusing character interactions. While “The Hateful Eight” is humorous enough to be a comedy, the director’s ability to provide his own brand of thrills through discourse is nearly absent from this film.

The paranoia, mystery and anticipation of the film’s first half left me intoxicated with the possibilities for how Tarantino would unravel his cleverly arranged situation. An intermission divides his road show, which also features an overture and extended runtime. Sadly, the film falls apart in the second half.

The violence in this film is, even by Tarantino’s standard, gratuitous. “The Hateful Eight” starts out rather engrossing as Tarantino coordinates all of his players. But by the time the blood begins to spill, the film quickly becomes redundant, sparing few characters by the end.

The epicly violent finale recalls those of his previous films — Django’s revenge in “Django Unchained,” or the theater scene involving Hitler’s murder in “Inglourious Basterds,” — but is longer and more insufferable. Tarantino at his best saves violence for real astonishment, but here you laugh at horrific sights only because the believability evaporates with each nasty death.

The highlights of Tarantino’s recent best films — like Michael Fassbender’s undercover sequence in “Inglourious Basterds” — have been exquisite for their suspense through words and a good premise. “The Hateful Eight,” though, is an overindulgent three hours of obviously diminishing returns, mostly of the pleasures of getting lost in a Tarantino movie.

On a different but important note, this Oscar-winning screenwriter-director needs to shed his obsession with the N-word, historical context or not. The director has famously used the word throughout his career, again employing it numerous times throughout “Hateful Eight” and “Django Unchained,” which was about a black slave’s revenge on plantation owners.

All is not in vain though. The cast is excellent wall to wall, particularly Russell, Goggins and Roth, who generate a majority of the film’s laughs, but it’s Leigh who gives a truly committed performance.

The cinematography is captivatingly expansive, especially in the early sequences outside the haberdashery, that take full advantage of the Wyoming landscape. Tarantino continues to show he has an ear for music, winning a Golden Globe for Best Original Score as he backdrops a Civil War-era setting with pop songs. These anachronisms embody Tarantino’s delirious vision, capable of showing you a dangerously fun time.

“The Hateful Eight” is entertaining in its own right as a bloodthirsty, sometimes maniacally toned black comedy. Although mediocre this time, Tarantino produced a decent film nonetheless.