Pitt falters at home against Duke 70-48 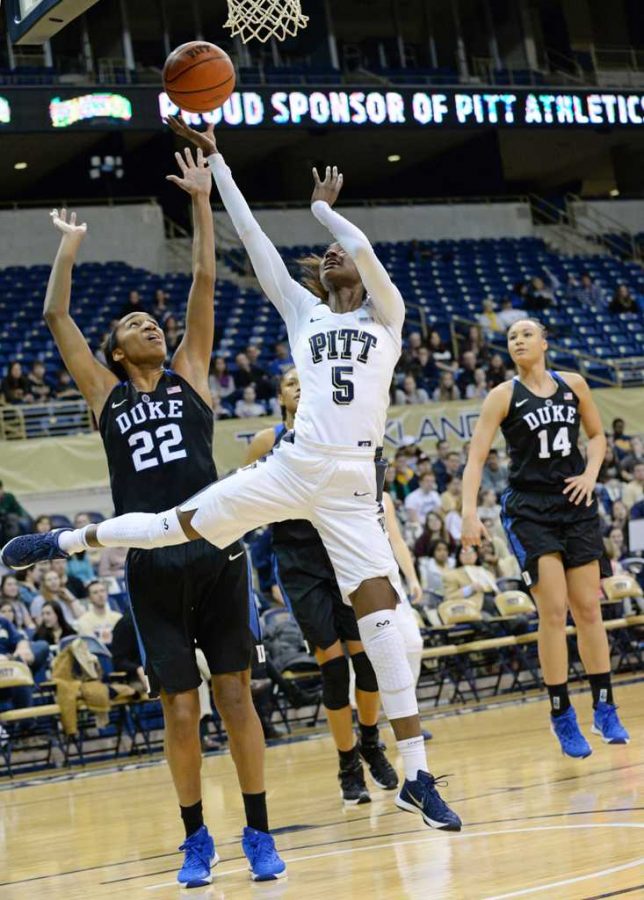 For every Pitt basket, Duke had an answer — and then some.

After breaking a seven-game losing streak on the road in its last game, the Pitt women’s basketball team (9-12, 1-7 ACC) struggled through a tough test with the Duke Blue Devils (16-6, 5-3 ACC) and eventually fell by a score of 70-48. The Panthers’ loss is their seventh in their last eight games.

The game started slow as both teams ended their first possessions with turnovers.

Dealing with a distinct size disadvantage, Pitt struggled to get good looks offensively in the early minutes of the first quarter against an active and lengthy Duke defense. After Duke opened the scoring, Pitt sophomore Aysia Bugg, who was scoreless in her last game, hit a jump shot with 7:21 remaining in the first quarter to get Pitt on the board.

The bucket served as a jumpstart for the Pitt offense, as the team connected on its next three baskets, including 3-point jumpers from junior Fred Potvin and freshman Brenna Wise.

“I have to come out and hit shots — that’s my role on the team,” said Potvin.

Despite Potvin’s early three, Duke remained confident. The Blue Devils continued to get points in the paint against a smaller Pitt frontcourt and took a 12-10 lead when Azurá Stevens found a lane to the basket for an easy layup.

Stevens, the second leading scorer in the ACC, was a problem for Pitt all night long, getting easy looks at the basket early and often, finishing with a game-high 26 points. Pitt added another pair of threes from Potvin and Wise, but couldn’t make up any ground as the Blue Devils took a 19-18 lead into the second quarter.

“I thought there were times that we moved the ball really well and got it in the hands of our shooters and there were good shots taken,” McConnell-Serio said. “But I think we got away from attacking the defense.”

Duke kept attacking, and Stevens kept delivering. The Blue Devils’ sophomore connected on a pair of 3-point shots and added another field goal before the end of the half, giving her 16 of their 34 points at the midway break.

“We just had some mental breakdowns defensively,” McConnell-Serio said. “When you get frustrated with your offense, it shouldn’t affect your defense, but I saw signs of that tonight.”

Despite trailing by only one prior to the start of the quarter,  the Panthers’ inability to score — which included a five-minute scoring drought — prevented them from keeping pace with Duke, as the Blue Devils took a 34-26 lead into halftime.

Needing to find baskets any way possible, Pitt came out in the second half again firing from deep. The 3-point field goal was the only thing working for Pitt’s offense on the night, as the Panthers connected on 10 shots from behind the arc.

“It’s our responsibility to have an inside-outside game,” Wise said. “We lacked that a little bit tonight.”

Wise drained her third triple on the Panthers’ opening possession and on the next trip added a pair of free throws to pull Pitt within five.

But Duke wouldn’t surrender the lead, adding a basket at the rim before knocking down threes on consecutive possessions to increase its lead to 13 points. The Duke field goals were the beginning of what would be a 13-0 run for the Blue Devils, stretching their lead once again to 19 points.

Although down by 19 points, the Panthers stopped the bleeding a bit when freshman Cassidy Walsh hit a triple off the bench with Wise following with one of her own on the next possession. The pair of threes cut the Duke lead back to 13 points, but the Pitt run didn’t provide a meaningful dent.

After a Duke timeout, Blue Devil center Amber Henson hit a three of her own as the Panthers left her alone outside the arc. A Bugg turnover on the ensuing possession gave the ball back to Duke, who nullified the mini run by the Panthers when Rebecca Greenwell hit a triple that served as a final dagger, extending the Duke lead back to 19 points.

The night wasn’t absent of any positives for the Panthers, though. Wise finished with a career-high 17 points to lead the Panthers. Wise also led the team in rebounds, pulling down 11 boards for a double-double.

Wise and the Panthers will aim for their second conference win when they travel to South Carolina on Sunday to face the Clemson Tigers at 2 p.m.