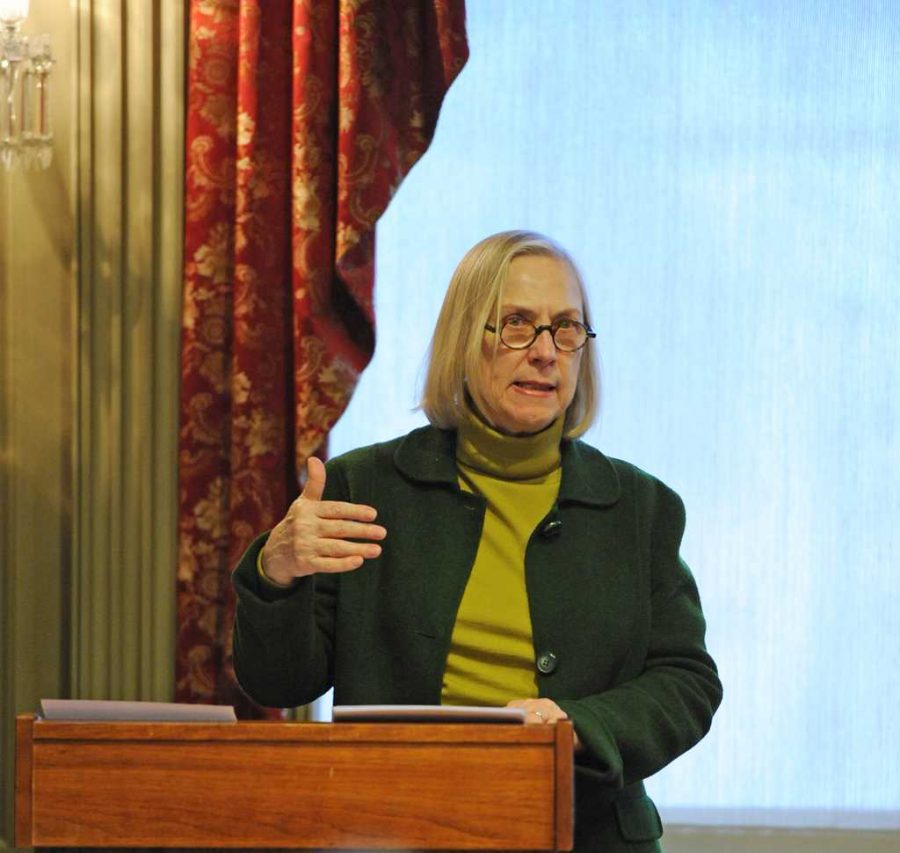 In the ’70s, two groups of lesbian women wanted a space to eat, talk and listen to music in Pittsburgh — but above all, they wanted to enact social change.

In that decade, the city was home to a vibrant music scene, but female musicians were hard to find. Together, two diverse lesbian organizations in Pittsburgh — the Wild Sisters and the Hard Hatted Women, which formed to support women in unionized work fields — worked to renovate a diner in the South Side to create a safe space.

Pat Ulbrich — a visiting scholar in the Gender and Women’s Studies Department — highlighted the two women’s groups in a presentation to 20 Pitt students, faculty and staff members — most of whom were affiliated with the GSWS — Thursday night. The audience gathered in the humanities center in the Cathedral to travel back to the ’70s and discover more about the history of women’s rights in Pittsburgh.

Ulbrich, a sociologist and activist, spoke about her work with the Thomas Merton Center in Bloomfield to create an oral history of the Pittsburgh women’s movement. She talked about the two lesbian organizations that were a crucial part of women’s search to create female spaces. Her studies on these groups are a part of her project, titled In Sisterhood, which focuses on different aspects of the women’s movement in Pittsburgh.

“The reason I started this project is that I’ve always been discouraged about the state of women in Pittsburgh,” Ulbrich said.

All the records Ulbrich has acquired as a part of her project will be donated to Pitt’s archive center. She hopes that these records will be online so that people all over the country can learn about Pittsburgh’s history.

As she began investigating, Ulbrich discovered an active community of women that had never before been documented. She shared just a small part of this community Thursday night by describing the work of the The Wild Sisters and The Hard Hatted Women.

The Wild Sisters began their movement by hosting musical performances by women in different venues around Pittsburgh in 1976. The group hosted one event every Saturday night for five years, and decided to open its own venue in the early 1980s. With the help of the Hard Hatted Women, which was founded in 1978, the group created a musical feminist space out of an old South Side diner.

The Hard Hatted Women was designed for women working in nontraditional fields. Although women began entering male-dominated fields in the 1960s and 70s, women still experienced sexual harassment and gender bias on the job, Ulbrich said.

Ulbrich interviewed the founder of the Hard Hatted Women as part of the In Sisterhood project. The woman, Nancy, whose last name Ulbrich kept confidential, told Ulbrich that women in Pittsburgh were even more likely to join the mostly male workforce since blue-collared jobs were abundant, unionized and generally well-paid.

Ulbrich read from her interview with Nancy, saying, “I think Pittsburgh was a place that was unusual because there wasn’t much division within the women’s community.”

The Hard Hatted Women began meeting at the YWCA Downtown, to support women in nontraditional jobs through training programs, and to be a pressure group to lobby against the problems women were experiencing.

The Hard Hatted Women received support from the community and unions, and even received funds to hold its training programs, Ulbrich said.

Though she had never picked up a video camera before, Ulbrich was determined to create an exhibit to showcase Pittsburgh women’s history. She succeeded, and has shown two different exhibits, one on black women in the movement in 2012 and another on the general women’s movement in 2013 in colleges and art galleries around Pennsylvania.

Marie Skoczylas, an instructor in the GSWS department, introduced Ulbrich on Thursday, listing her various accomplishments, including the foundation of the Women and Girl’s Foundation in Southwest Pennsylvania, and the reception of the Feminist Activism Award in 2002.

“It’s been an honor to work with her,” Skoczylas said.

Ulbrich’s presentation included information she acquired from 12 of the 80 interviews Ulbrich has recorded for her project, but lacked multimedia. Ulbrich described Thursday night’s talk as a teaser for her new exhibit opening in the summer.

This July, Ulbrich will open her third exhibit, which will focus on women in the labor forces and their contribution to the women’s movement. Ulbrich did not announce where her exhibit will show.

With her presentation, Ulbrich aims to bring light to a group of short-lived but impactful organizations. By the mid-’80s, the women’s movement shifted to focus on domestic violence, and these organizations saw their support fade, according to Ulbrich.

“As lesbians, they were wildly promoting new dimensions of sisterhood in Pittsburgh,” Ulbrich said.

Correction: In a previous version of this story, The Pitt News misidentified the founder of the Hard Hatted Women. A woman named Nancy, whose last name was withheld from The Pitt News for confidentiality reasons, founded the group. Additionally, The Pitt News stated that women and minorities could get non-traditional jobs after the Equal Rights Act passed. This is not true. This act never passed, and women and minorities got non-traditional jobs in the ’60s and ’70s, after the Civil Rights Act passed.