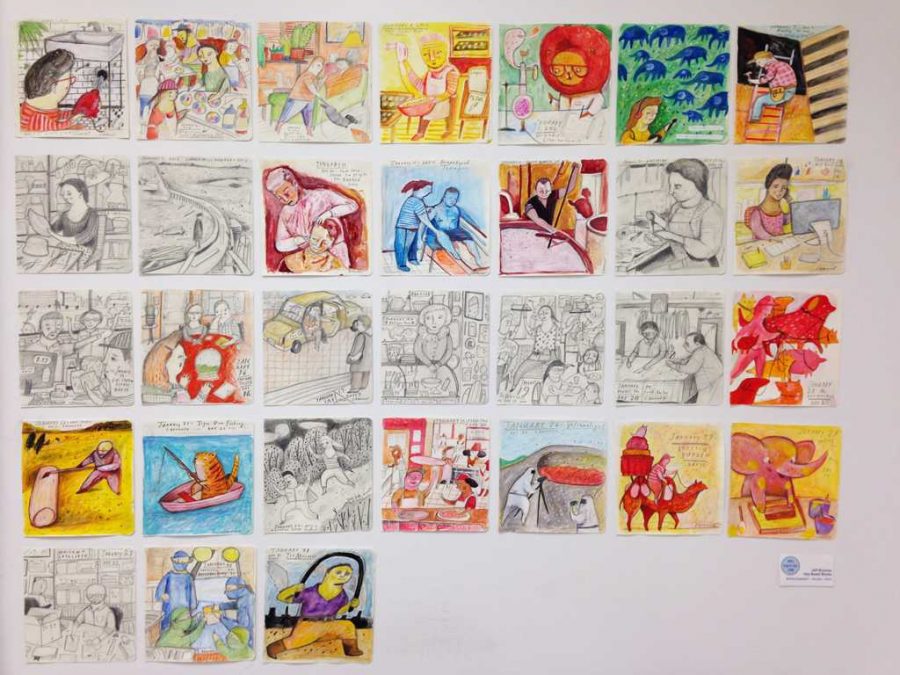 A creative idea and the drive to get it done — that’s all it takes to exhibit artwork in Fun-a-Day, a national event with a loyal Pittsburgh following.

Fun-a-Day, a volunteer-run concept that started in Philadelphia 12 years ago, has spread to cities all across America as an event focused  more on the process than the finished product. The premise is that every day for the month of January, artists work on individual creative projects. Over the weekend, Pittsburgh’s ninth annual Fun-a-Day exhibit showcased its participants’ work at TechShop, a community and art center in East Liberty.

You won’t find many oil paintings or traditional canvases at Fun-a-Day. But you will find “…coffee paintings, self portraits done by 3-year-olds, tiny sculptures that fit inside of gumball machine pods, photographs of shadows, a song a day, written and recorded,” said Emma Rehm, who has organized the event for five years.

About 30 Pittsburghers presented their completed projects this year in front of about 200 people over the course of two days.

“A huge difference from an average art show is that when people sign up to be a part of [Fun-a-Day], they haven’t created anything for their installation yet,” said participant Caitlin Donahoe, who wrote a haiku a day. “We have to create it as time passes.”

TechShop donated its classrooms for the exhibition, so the event was free both to participate in and to attend. Fun-a-Day’s volunteers organized the classrooms like a mock art show. Projects ranged from drawings to textiles and even tattoos, presented to illuminate the work’s evolution.

“You can see development and progress,” said Rehm. “You can [also] see the days when people were phoning it in because the tank was empty, or the days people struggled with inspiration. You see a huge variety of formats and media.”

The daily requirement can be a tough routine to stick to, especially when there’s no one to regulate the “art every day” rule but the artists themselves. In Rehm’s words, “It’s hard — life is very disruptive.”

Despite the challenge, participants offer a constant state of support on the Fun-a-Day Blogspot page by posting updates with words and documenting pictures of their process leading up to the exhibition’s opening. Brighton Heights artist and librarian Jeff Brunner posted pictures of several of his 30-minute sketches on Instagram with annotations, including one of a surgical appendectomy “by request,” adding that he took cues from Thomas Eakin’s 1875 oil painting “The Gross Clinic.”

“I’d definitely encourage others to participate,” said Brunner. “Just taking the time to make something new every day, it slows you down and lets your brain drop all of the craziness of the day. It’s almost like a meditative practice.”

Brunner is continuing the project on his Tumblr, Hey Beast Studio.

“Fun-a-Day becomes a really supportive community, especially on social media,” said Rehm. “Even though most people are doing their projects alone, there is a sense of being part of something that other people are struggling through together.”

Participant and public relations volunteer Laura Greenawalt’s project was a pop-up book using only refurbished materials she had lying around. She only completed a week’s worth of material —“Life, man,” she offered as an alibi — so she exhibited just the first page of her book, an ode to her roommate’s new Yorkie puppy.

“It’s not like any art show you’ve seen before,” said Greenawalt. “It’s completely egalitarian and there are no rules. When there are no barriers to participation, people get weird with it, which I think is super rad.”

In 2011, the originators of Pittsburgh’s Fun-a-Day moved out of town, and no one took over to officially organize the exhibition that year.

“But the most wonderful thing happened,” Rehm said. “People all over town still participated.”

Even without a space to show off their finished products, people still created on their own, either showing off their projects online or nowhere at all.

To Rehm, the end goal has always been just to create art every day, regardless of audience or venue.

“A lot of folks use the framework to kick-start their creative thinking, and also as a coping mechanism for dealing with the grim reality of a cold, gray Pittsburgh January,” said Rehm. “A monthlong challenge is a beautiful framework because it’s accessible, but also just hard enough to really feel like it counts for something.”