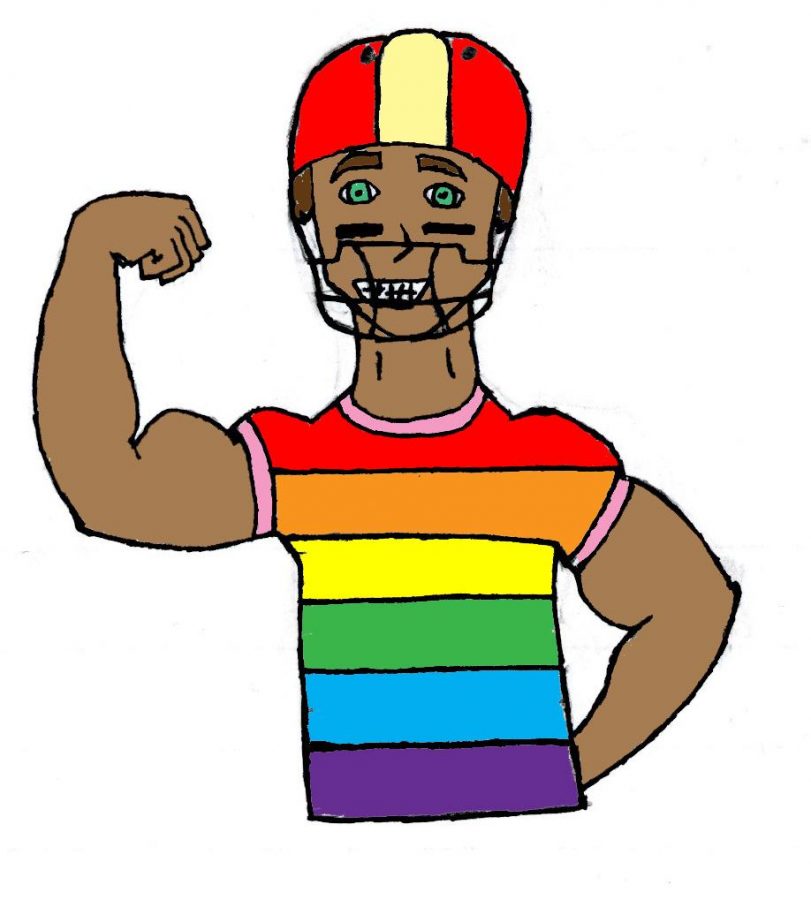 Kichi’s most recent picture book, “Football is Soooo Gay” is a diatribe to what he considers an essential truth: football is an inherently homosexual sport. Men only play it, obsess over it and dedicate their lives to it, according to Kichi — who is openly gay — to fake their way through heterosexuality.

“The homosexual phenomena is not so passive. Science documents the homosexual urge [exists] in one degree or another in a majority of men,” Kichi said in an email.

Watching men watch men in tight spandex lightly spank each other for support before they head in for a group shower does make me think there’s something innately homoerotic happening. But Kichi said it’s all a ruse so men can prove they’re straight by acting gay and not getting turned on.

“But then I have to ask, prove to who?” said Emily Deering Crosby, a visiting instructor in Pitt’s Gender, Sexuality and Women’s Studies program. Crosby, who focuses mainly on gender and race, has also written about double-bind rhetoric in sports culture.

“Gender is the process of becoming,” Crosby said, adding that as we grow up, we’re taught to reaffirm our gender over and over again. For self-identified men, growing up often means shedding any trace of femininity or homosexuality — two characteristics many people mistakenly associate.

“By high school, [young men are] completely isolated from each other,” Crosby said, adding that they’ve become repressed and angry — and what better place to take out that identity confusion than on the football field?

Crosby’s theory isn’t out of left field. The simple existence of scores of theories related to masculinity and homosexuality is a sign of the times.

Our generation is much more apt to believe that sexuality is a spectrum and not a checkbox, so why are the pro leagues — namely the NFL and the NBA — so far behind?

A few athletes, including 49ers running back David Kopay, have come out after retirement, but haven’t inspired many followers. NBA athlete Jason Collins made history when he publicly came out in 2014. Michael Sam, the St. Louis Rams’ draft pick in 2014, was going to be the first openly gay man to play in the NFL — until he wasn’t.

Crosby noted that football fans lauded Michael Sam for his athletic prowess, but when he came out, people changed their opinion to “Oh, he wasn’t that good anyway.” That’s because the culture of the NFL, according to Crosby, is built and maintained by older, white men.

“[Football] is built on myths of masculinity that people have bought into to such an extent they don’t want that to be dismantled,” Crosby said.

And the gender and sexuality anxieties don’t just manifest in men’s sports. Sports historian and Pitt professor Rob Ruck said that, for years, women athletes were afraid of falling into typecasts of their own.

“Women athletes, gay or straight, faced people calling them butch, calling them lesbians,” Ruck said. In the same way that men put on shows of intense masculinity to deny any trace of homosexuality, women began playing what Crosby called the “hetero sexy game.”

Which isn’t to say that gay pro football and basketball players are hopeless — and trust me, considering that there are over 1,600 players in the NFL and around 400 players in the NBA, there are more homosexual athletes than Sam and Collins. It’s just that the intensity of coming out in that culture is so high, many men probably decide to dodge the spotlight.

After Sam came out, that became his legacy, and it’s one that he’ll probably retain for the rest of his life. It’s hard for male athletes to be open about their sexualities because, as perceived anomalies, the media expects them to become the face of the LGBTQ+ community in sports.

So the paradox becomes that a lack of openly gay men in highly-publicized pro sports discourages young men from breaking the forced heterosexual facade early on. But as those men grow up and start playing professionally, the narrow array of openly homosexual men makes it harder and harder to be the first.

Tony Jovenitti, a Pitt alum and college hockey sports writer who came out in a column he wrote for Outsports, said he didn’t have anyone to look up to when he was growing up. He spent a lot of time pushing away anything feminine.

“Any little thing I did that was considered fem would be called out and pointed out by my peers,” Jovenitti said. “There was no push to change it, even coaches encouraged it.”

Jovenitti, who’s now a software specialist in Wisconsin, worked with the Penguins his senior year at Pitt, where he said he encountered “coded homophobia.”

“It may be a little more challenging [to come out] in Pittsburgh,” Jovenitti said. “It’s a very intense sports town and it’s a small city … every fan has an opinion.”

Jovenitti was at a bar in Boston for college ice hockey’s Frozen Four tournament last year when he and his friend befriended someone else. Months later, the man messaged Jovenitti on Facebook to tell him that he had an awakening after meeting the two friends in the bar.

“It blew me away,” Jovenitti said. It was seeing them being open and comfortable and attending a hockey game that made the man realize he didn’t have to separate his sexuality and his passion for the game.

It was three years ago that NBA player Jason Collins inspired Jovenitti to come out publicly, paving the way for one impactful moment in Boston. Small steps, but maybe that’s the way it will happen in an industry so reluctant to kick down the closet doors.

“I don’t know if we’re going to see a slow trickle of people or if the floodgates will open,” Jovenitti said. “[But] more of these stories need to be told.”