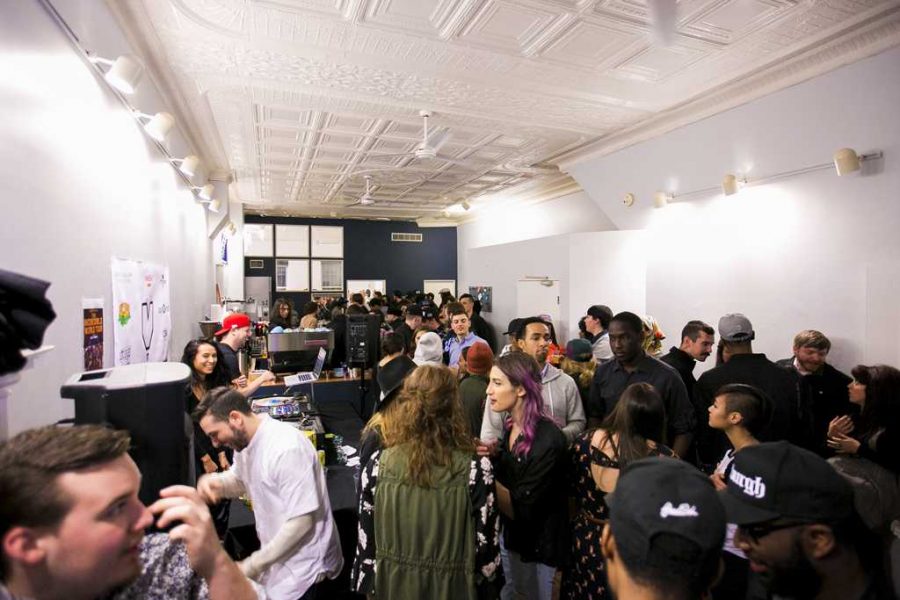 By Brian Murray / for The Pitt News

Two Pittsburgh photographers are offering free alcohol in exchange for a chat and some creativity.

Cody Baker and Chancelor Humphrey draw Pittsburgh’s cultural and artistic community together under one roof to promote collaboration during their three-hour schmooze fests, called “Creatives Drink.”

On Feb. 4,  Lawrenceville’s Constellation Coffee hosted the campaign’s fourth event. Since June, each gathering lures rappers, designers, photographers, musicians and other artists for three hours of music, free locally brewed beer and access to some of Pittsburgh’s most creative minds.

“The original idea was to just bring like-minded people together for a few hours to talk and hope that provoked some inspiration for the people,” Baker said.

Baker’s budding friendship with Humphrey, the photographer behind the popular #KeepPittsburghDope blog, grew into the Creatives Drink campaign.

“We didn’t want to make it so formal,” Humphrey said, “like a stuffy networking event.”

Their goal was instead to create an environment that catalyzed similar business-friendship partnerships with other artists.

“You do the same things [at Creatives Drink] you do at a party,” Humphrey said, “but at the same time there’s that networking subconscious.”

In addition to bringing together Pittsburghers “who want to be a part of the community and want to grow,” Baker wants to raise awareness of Pittsburgh’s rich local creative culture outside the conventional visual art realm, such as brewing beer.

More and more local businesses and breweries, such as Pittsburgh Winery and Hop Farm Brewing Co., have helped sponsor Creatives Drink, which Baker said is helping raise attendance, by supplying the free drinks.

“We brought in local sponsors and found we could educate our guests on local alcohol instead of them drinking cheap, largely distributed beers,” Baker said.

Creatives Drink started out relatively small, and Baker estimates that the first event at Howl at the Moon attracted around 50 people.  At that point, their now-celebrated free drink campaign hadn’t yet materialized, and they instead charged participants between $1-3 to drink as a fundraiser for future events.

“[That] was just a test, and people came,” Humphrey said. “People will come. We might have something here.”

Emily Plazek, a local musician, CEO of Music Industry Connected, Pittsburgh (MIC PGH) and 2013 Pitt alumna, attended the inaugural event because of Baker, who created Plazek’s cover and website art for her music career. That friendship and the event’s vibes have made her a regular at Creative Drinks.

“There’s such a gut feeling of excitement when you go to an event with creative people,” Plazek said. “You get the feeling that, ‘I’m not the only one trying to do this.’”

While the event attracts a large group of  professional artists, Plazek said students have the most to benefit. She’s met and hired several interns for MIC PGH through Creatives Drink.

“When [students] come and get out of their comfort zone, it’s really good for them to start to see all the options out there,” Plazek said.

When she was a still student, Plazek feared her artistic endeavors wouldn’t survive in Pittsburgh after she graduated.

“I thought that because I was stuck in Pittsburgh, I would have to give up on my dream,” Plazek said, as opposed to the cultural hubs of New York City and Los Angeles.

Tony Resch, a Pitt senior majoring in fiction writing, said he worries that students who are content to stay in Oakland miss the artistic offerings Pittsburgh does offer.

“I feel like Oakland can be a container for a lot of kids,” Resch said.

But attending CD4 ­— the fourth installment of Creatives Drink — opened his eyes to the growing creative opportunities in Pittsburgh.

He initially heard about the event as so many have — through word-of-mouth from friends and fellow Pittsburghers.

“I figured it could be a good networking opportunity,” Resch said. “If more kids knew about these kinds of events, then more would be aware of the awesome art and music that’s coming out of Pittsburgh, and then they would go out and see it.”

While many gallery crawls in Pittsburgh offer both conversation and alcohol, Creatives Drink is the only current popular event focusing on the two specifically. Baker said he hopes to see the event continue to grow and influence Pittsburgh’s creative community.

“We have some cool stuff in the works for CD5 and CD6,” he said, which have yet to be announced.  “Imagine if more and more unique events were to pop up that all bring our community together. We would grow and flourish like never before.”