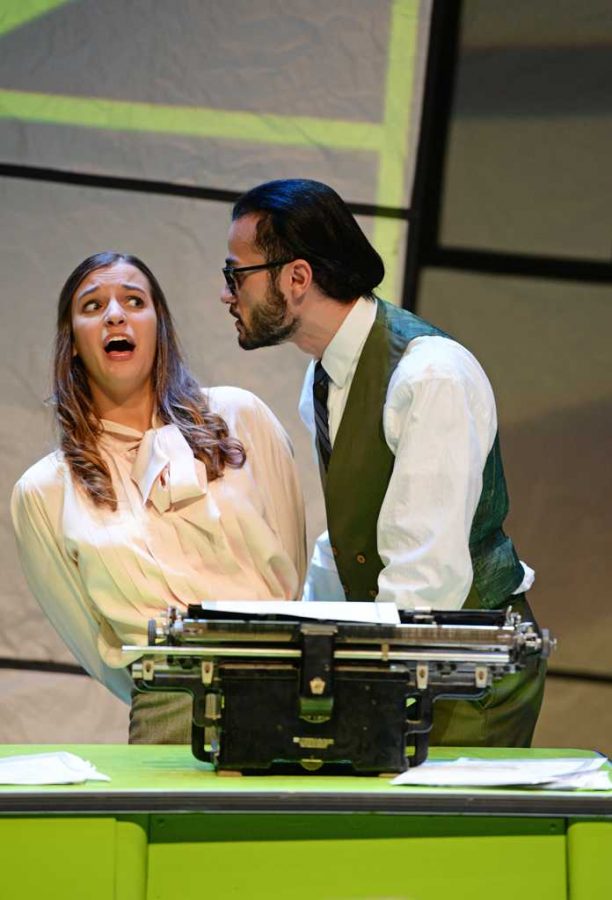 Even the most outlandish trends, be it political ideology or viral internet meme, can generate a following — even rhinoceroses.

Tonight, Pitt’s theater department will put that theory into practice in its debut production of French playwright Eugéne Ionesco’s “Rhinoceros,” which runs from Thursday, Feb. 18, through Sunday, Feb. 28. The shows open 8 p.m. Tuesday through Saturday and 2 p.m. Sundays at the Studio Theatre in B-24 Cathedral of Learning. Student performers have resurrected the nearly 70-year-old play without much change, proving its relevance and timelessness.

The story follows a French village whose inhabitants slowly turn into rhinoceroses. Their only symptom — aside from morphing body shapes — seems to be their changing ideologies. Ionesco wrote the avant-garde, pachyderm-obsessed drama in 1959. The play was a theatrical post-war response to fascism, communism and the rise of other political and nationalist ideologies, as each of the town’s citizens transform except for the protagonist, Berenger, a drunk, pitiful everyman.

“Rhinoceros” cleverly deals with ideas of conformity, individuality and morality by showing what people go through when pitted against a mass ideology. While thoroughly avant-garde, the play also inhabits the absurdist realm, a period of play and literary creation that lasted from the ’50s to the early ’60s. Such productions adhered to French philosopher Albert Camus’ notion of absurdism, which posits that humanity’s attempts to attain understanding are ultimately futile.

In true absurdist fashion, the play offers up more questions than answers. It asks of the audience the classic question, “What would you do in this scenario?” It also gives the viewer many positions to choose from and side with, perfectly summing up the complicated and imperfect issues at hand.

The play’s political undertones, hyperbolically represented by rhinoceroses, are not lost on the cast and crew — especially Claire Syler, an adjunct professor in Pitt’s theater department and the play’s director.

She said in choosing “Rhinoceros,” she was conscious that the production would coincide with presidential campaign season, which, inevitably, is a time of high-profile, polarizing rhetoric.

“It is my belief that the most robust theater does not tell an audience what to think, rather it provides a multivalent performance that demands interpretation,” Syler said. “That’s what we’ve tried to do.”

The performance feels like a parallel to our own American political process, which at times feels like a zoo from the citizen’s perspective. Extensively, Berenger represents all of humanity as the last holdout against conformity and the spirit of individuality and free will.

The actors also see the humor in the philosophical noise. Ben McClymont, a junior Asian studies and theater arts double major, plays Berenger, and senior marketing and theater arts major Claire Sabatine plays Daisy, the receptionist at the newspaper at which Berenger works and with whom he is in love. They say the play’s humor keeps its heavier underlying themes accessible to the audience.

“One of my favorite parts about this world my fellow fearless cast members, director and I have created is the ability to portray comedy on the surface while layering in culturally relevant themes of conformity and social norms underneath,” Sabatine said. “I enjoy being in shows that start a conversation.”

As a provocative and engaging play, “Rhinoceros” demands its audience to keep an open mind while examining their own perceptions of normality.

“With the Theatre of the Absurd, this distance is taken to the extreme, isolating and highlighting the idiosyncrasies of daily life that we have grown accustomed to,” McClymont said. “It is shockingly funny one second and just when you’re lulled into a sense of calm, a rhino comes trampling back in to disrupt everything.”

The relevant messages of conformity and groupthink aren’t the play’s only attraction. The set design beautifully accentuates the characters’ physical and ideological transformation, tracking the story’s progression.

“[The design] itself is worth seeing — the production team exceeded all expectations,” Sabatine said.

The green-toned set pieces change with the play’s mood, along with darkening shades of green light, which mirror characters’ sickly descent into the body and mindset of the growing rhinoceros majority. As more characters turn from fleshy to leathery, the definition of “sickness” changes, resulting in the remaining human minority considering themselves undesirables.

The play leaves you with more questions than answers, but those same questions will stampede in your skull for some time afterward.

“We tend to fear what we cannot understand, and knowing that we tend to [marginalize] people who don’t fit precisely into the puzzle of society as a whole is important,” McClymont said. “Instead of tearing it down, we need to revere this uniqueness and understand that everyone has something they can positively contribute to society.”