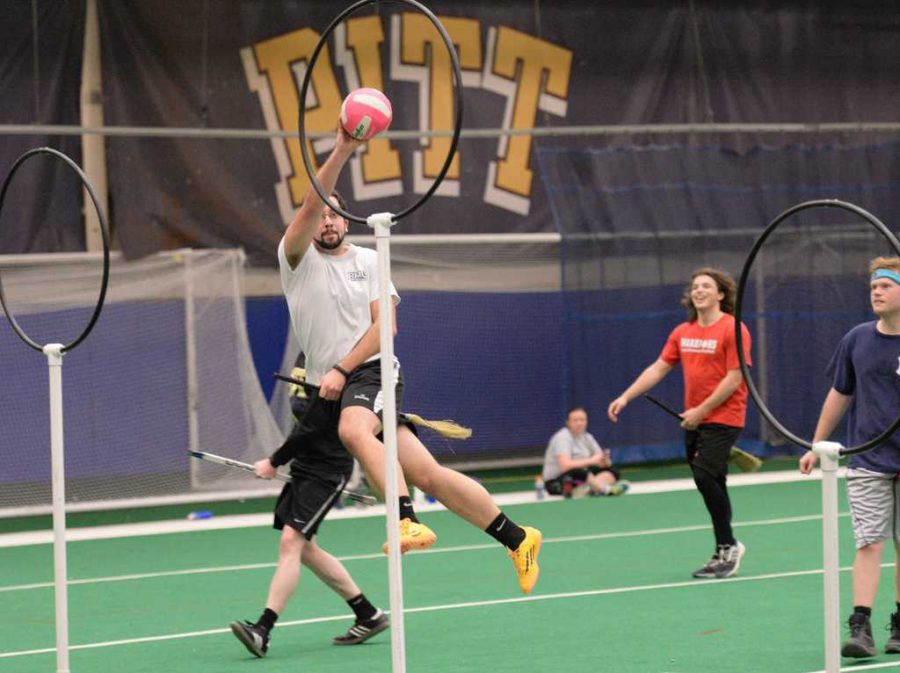 By Ryan Recihardt / For The Pitt News

Clutching brooms between their knees, the members of the Pitt Quidditch team crouched on opposite sides of the field before their in-practice scrimmage at the Cost Center on Friday.

They bounced on their toes. They cockily did push-ups. They waited for a teammate on the sideline to call out “Broom’s Up!”

And then, they were off.

Six players sprinted toward four game balls resting at midfield, barrelling forward to try and get the first opportunity to score. For now, it’s only practice, but this Sunday, Feb. 21, the Pitt Quidditch team will start competing against 14 other college teams during its first year in the Great Lakes Conference.

While other students were heading out to the bars or gobbling down Sorrento’s, the players have been readying themselves for their first spring tournament at Carnegie Mellon University, practicing for hours on Friday nights.

Fourth-year player Karen Hranek said she feels like they have the edge for the CMU tournament.

“We’ve had good records in the past against the teams that will be there,” Hranek said.

Quidditch, the one-time fictional pastime created by J.K. Rowling for her Harry Potter novel series, has sprouted into a popular club sport across college campuses since the late 2000s. Pitt’s team, founded in 2009, is one of more than 200 teams under the umbrella of U.S. Quidditch — the sport’s governing body.

The game consists of four positions and three types of balls. One of those “balls” is a human dressed in yellow called “the snitch,” who, if caught by a “seeker,” ends the game. Until their capture, three chasers pass around a volleyball called a “quaffle” to try and get it past keepers, who defend hoops, while avoiding beaters, who throw “bludgers” — dodgeballs — at the chasers to force them to drop the quaffle.

Co-president and three-year player Chandler Larkin said he feels confident about Pitt’s standings against the other teams, such as Carnegie Mellon, West Virginia University and Grove City College.

Compared to Pitt, Larkin said those competitors are Muggles.

“They all kinda stink,” Larkin said. “CMU will probably be our toughest though, but even that should be a blowout.”

“Of course we’re also looking forward to playing Pitt as well,” WVU quidditch captain Jeff Stevens said. “We’ve only met twice, with Pitt taking both matches, and with the rivalry between our schools, there’s nothing we want more than to beat them.”

Far from fantasy, the sport is full contact and fast paced, as players constantly run from one end of the field to another while dodging speeding bludgers. The sport resembles a mix of handball and dodgeball, only in this version, the players clench brooms between their legs.

Although passion for Harry Potter helps, quidditch requires athletic skill — just like any other sport — with tryouts and cuts each fall. This year, the best 28 players remained out of an estimated 40 candidates.

The remaining players train together almost all year with hopes of making it to the Nationals tournament field of 60 teams in April, an apex they reached every year until missing the past two.

The team is looking to improve off of its approximately .500 record in the fall tournaments and feels confident about its chances.

“In the past, we’ve always come out ahead,” senior Vice President Micah Vinovskis said.

Vinovskis said the routine at practice changes as tournaments near. Practices morph for different positions, especially for the beaters, the quidditch equivalent of defensemen, who are currently trying to integrate into an offensive scheme.

“I chose beater because I didn’t like the idea of running back and forth,” Vinovskis said.

But with their recent incorporation into the offense, Vinovskis ends up running back and forth anyway.

Instead of waiting on defense for the action to come to them, Pitt beaters are constantly in the action. This change gives more scoring chances for the team, improving its odds to take it all at CMU.

Still, switching to the Great Lakes Conference this year does bring on more competition for Pitt, and in a more convenient manner. The team used to be a part of the Mid-Atlantic Conference, playing teams like Delaware, Maryland and West Virginia.

“We are grateful for the change,” Hranek said. “In the past, we have had to travel approximately six to seven hours by car to get to regional tournaments, and we now travel about three to four.”

As a club sport, Pitt’s team is student run and does a lot of its own fundraising for equipment and travel expenses, which the switch cuts down on.

“It’s also nice to get some new competition we haven’t really interacted with before,” Hranek said.

Practices leading up to the tournament start out like that of any other sports team, with a warm-up jog and team stretching. But, after that is when they really start to prep for the tournament, jumping right into scrimmaging.

During these scrimmages, the players execute pre-designed plays and work out special trick plays for later in tournament play. Players get creative, working the quaffle — the main ball used for scoring in Quidditch — around the field in any way possible.

Players will bounce the ball through the legs of opponents, just like Allen Iverson used to do to the players trying to guard him on the basketball court. Quidditch players kick the ball, toss it behind their backs, smack it through the air, shoot it like a basketball and pitch it overhand, all with hopes of getting it downfield to score.

“Leading up to a tournament, we focus more on individual play and strategy,” Vinovskis said.

During a recent practice, one predesigned trick play set up an almost too easy opportunity to a score. As the offensive team drove down the field, one player tossed the ball to a teammate near the sideline, drawing the defense outward.

Without catching the ball, the player on the outside smacked the ball open-palmed, like a volleyball spike, back toward the original player who caught it and lobbed it through the hoop for a 10-point score.

These kinds of plays make Pitt a tough team to beat — something even WVU will admit.

“That will be a tough match for us, but we look forward to the challenge,” Stevens said.