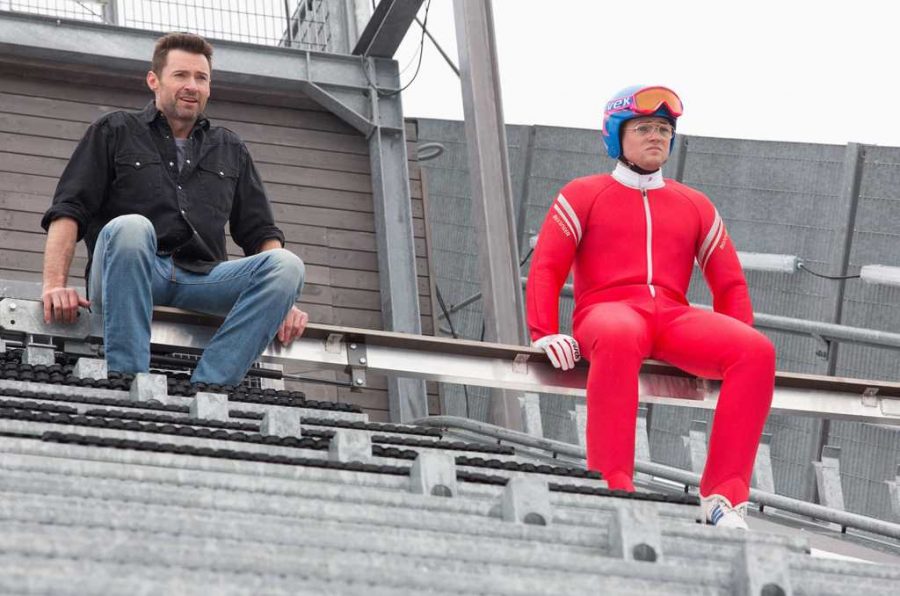 Despite its quirky hero threatening to flop the film, “Eddie the Eagle” is the latest true-life Olympic sports drama to dare for an Icarian flight.

Following the likes of last week’s Jesse Owens biopic “Race,” “Eddie the Eagle” carves out its individual setting and dramatic structure, but the film hits all the bad beats that makes the athlete profile genre so short on gems and so high on redundancy. Though not as disgraceful as John Goodman’s forgettable “The Babe,” “Eddie the Eagle” doesn’t seem likely to become a cult classic.

The story is washed out with worn cliches, but Eddie Edwards’ true story, with Olympic ski jumping thrills,, is enough to overcome the film’s formulaic flaws and thick sentimentality.

Soaked in ’80s nostalgia, “Eddie the Eagle” is a light-hearted biopic of Eddie “The Eagle” Edwards (Taron Egerton) following the U.K. native  from childhood up to his insane amateur performance at the 1988 Winter Olympics.

At the 1988 Olympics, he finished last in the 70- and 90-meter jumps, his fruitless perseverance and resilient mentality famously earning him many admirers and plenty of naysayer — athletes and those who held the games above Egerton’s seemingly whimsical career.

The Dexter Flecher-directed film is entirely about Eddie’s career as “The Eagle” — not Eddie the person.

The movie really kicks off with Egerton wearing Eddie’s earnest gawk as he tries to make it as a downhill skier. Soon after, his attention turns to ski jumping when he realizes that Britain hasn’t had a representative in the category in decades. At age 22 — while most athletes start training at five or six —  the amateur ski jumper began training in order to surpass the Olympics’ then-lax qualifications, which only required ski jumpers to clear 61 meters.

While practicing his jumps on his own dime in New York, he ropes in ex-ski jumper Bronson Peary (Hugh Jackman) to be his mentor.

When he’s not playing Wolverine, Jackman has a knack for being the gruff alcoholic trainer type with a heart of gold, as he did in the similarly lukewarm “Real Steel.” The man is mightily charismatic, if not insincere this time around, phoning in sobering humor to a film lost in its protagonist’s blind optimism.

Egerton is unremarkable, trading his charms displayed in “Kingsman: The Secret Service” last year for a turn that ranges from decent to laughable. His facial performance — which strictly involves scrunching his face together, trying to express Edwards’ famously poor vision — is labored and distracting to watch.

His parents’ roles are trivialized in his father’s stern disapproval and his mother’s secret encouragement, while Christopher Walken sleepwalks through a tiny role as Warren Sharp, a retired Olympic coach to Bronson.

Despite all of this, the film’s energy is infectious, and the emotional beats — while predictable — are genuine, as the underdog tale begets the schmaltziness. The real pleasures lie in the intensity behind the skiing sequences, such as Edwards’ first 70- and 90-meter jumps in the 1988 Calgary Olympics, which are suitably made to look terrifying by milking the stand’s deceiving initial height, while the kitschy, upbeat score reinforces Edwards’ blindness to fear.

It’s only right that the film reminds us often of how reckless Edwards really was, as his legacy is built not on his successes, but his labored failures­.

“Eddie the Eagle” is a light-as-fluff biopic that aggravated me before I succumbed to its corny pleasures. Egerton’s performance is hammy to say the least, but he sells the stubbornness that must have been the essence of Edwards, an almost idiotically determined amateur athlete.

The film is saturated with near-deafening happy-go-lucky vibes. But with its eagerness to please, especially over a forgiving hour-and-45-minute runtime, “Eddie” skates by simply on a fascinating true tale.