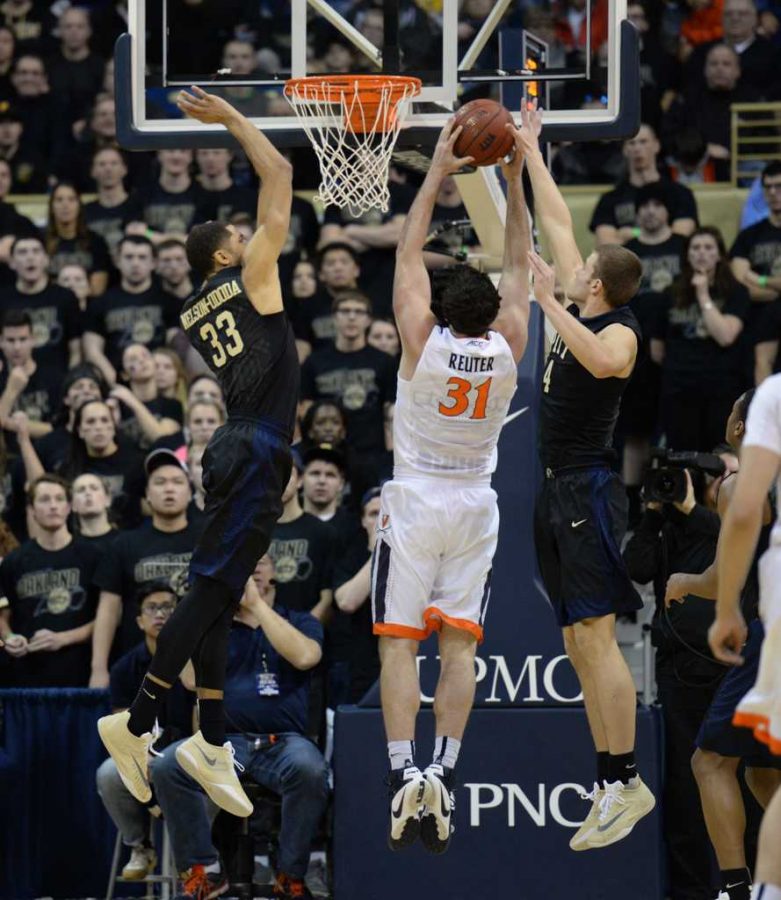 One game after squashing the Syracuse Orange to a pulp, head coach Jamie Dixon and the Pitt men’s basketball team have Cardinals in their crosshairs.

At a press conference Monday, Dixon and junior forward Jamel Artis discussed their defensive performance Saturday, what went wrong in their last outing against University of Louisville and the Cardinals’ postseason ban.

After holding Syracuse to a measly 37.6 percent shooting at the Carrier Dome Saturday, the official Twitter account for the Pitt basketball team tweeted out a video of Dixon reciting that figure to his players, which elicited some screaming from them and some celebratory moves by the coach.

But Dixon assured people that this wasn’t the first time he was that elated after a defensive performance.

The head coach had reason to dance, as his Panthers, who in the past have been lauded for staunch, tough defenses, have struggled to get stops on that end.

But some work between their game last Tuesday against Wake Forest University and their weekend win helped amp up the effort on defense.

“We had a good week of practice,” Dixon said. “I thought we really emphasized some things and got a lot of things across.”

The key now is whether or not Pitt can maintain the level of play past Saturday and into its contests Wednesday and beyond. Dixon said his team won’t become overconfident, but they need to do more than stay level-headed to stay successful.

“Complacency, I don’t think that’s an issue. It’s the execution, it’s the belief, it’s the understanding,” Dixon said. “And sometimes other guys make shots. The other team is trying to win, too.”

Artis agreed that the Panthers can’t stop trying to get better now. According to the forward, it will be a group effort.

“We can’t count on one man to stop someone,” Artis said. “We have to play team defense.”

His Panthers have lost their last seven games against the Cardinals, with his last victory dating all the way back to Feb. 27, 2011. They didn’t get much closer to ending the skid in their first outing against Louisville this year, falling to the Cardinals 59-41.

“The last game, I thought we had a good plan going into it, and we never got to that,” Dixon said. “We wanted to run.”

He specifically cited turnovers — the Panthers had 19 total — as a key reason for their loss at the KFC Yum! Center.

Dixon highlighted the size of Louisville as a concern, noting they have plenty of different big men to throw at Pitt. Last time they played, the Cardinals’ center Chinanu Onuaku dominated Pitt inside, going for 18 points and 10 rebounds.

“They’ve got so many guys,” Dixon said. “Just so much depth and so much size, especially inside.”

Artis said the recipe for a victory is simple.

“When we outrebound teams, we win,” Artis said. “We have to outrebound them, we have to be aggressive on offense and we have to score the basketball. When we don’t score, we don’t win.”

On Feb. 5, Louisville announced that, due to the NCAA’s ongoing investigation over alleged recruiting violations, they would self-impose a postseason ban this year.

Artis expressed his sympathy for the opposing players, particularly highlighting the senior class.

“It’s a terrible feeling. I feel for them and the seniors that came in,” Artis said. “It’s a great program, Louisville. They’re doing pretty well right now, and just to know that they can’t make it to the tournament is a sad feeling.”

Still, Artis understands the Cardinals won’t relent because of the ban.

Dixon said at the end of the day, the issue requires perspective.

“If you asked every one of those players, they’ve been through something more draining, more emotional than what they’re going through now.”

He highlighted Pitt graduate transfer guard Sterling Smith, who is currently home, mourning the loss of his grandmother.

“To put things in perspective, there are bigger challenges in life.”