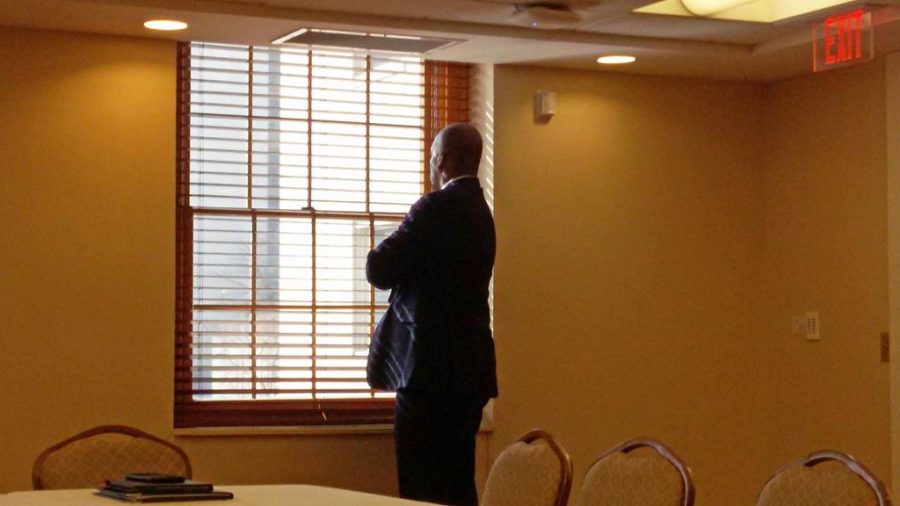 After months serving in the position, Kenyon Bonner is now settling into his vice provost and dean of students office.

More than a year after the job opened, Pitt appointed Kenyon Bonner, the former interim vice provost and dean of students, to the full position at the winter Board of Trustees meeting Friday. He will officially assume the role Tuesday, but met with students after the announcement at Student Leaders’ Recognition Dinner in one of his first appearances in the official role.

Bonner filled the position as the interim vice provost and dean of students in January 2015 after Chancellor Patrick Gallagher promoted former dean Kathy Humphrey to senior vice chancellor for engagement and chief of staff.

Since Bonner joined Pitt in 2004 as the assistant director of residence life, he’s climbed the ranks of the Division of Student Affairs. By the time he became interim vice provost and dean of students, Bonner had served as director of student life for 11 years, associate dean of students for seven years and had directed the RISE Mentoring Program.

Bonner studied psychology and philosophy at Washington and Jefferson College, where he played basketball throughout his career. He later completed his doctorate in rehabilitation counseling from Kent State University.

In 2013, Pitt awarded Bonner with the Chancellor’s Award for Staff for Excellence in Service to the University — the highest honor a staff member can receive, according to Pitt’s website.

In October, Pitt formally opened up the position to applicants when it posted the job online and formed a search committee to narrow down candidates. In early February, the search committee met with and interviewed four finalists, including associate deans and other student life leaders from Georgia, Texas and Michigan.

Pitt tasks the vice provost and dean of students with integrating student life and academics and leading Pitt’s Division of Student Affairs, which incorporates Student life, Residence Life, Pitt’s health and counseling services, Pitt’s career development and placement programs and intramural sports, among several other offices. The dean oversees a staff of about 200 people.

According to Pitt Provost Patricia Beeson, Bonner’s other priorities involve expanding the OCC, evaluating Pitt’s academic and career advising services and making plans to increase diversity — and they’re ones Beeson is holding him to.

“I’ve challenged him to find ways to use the diversity on campus to engage students,” Beeson said.

She also said Bonner plans to hire new staff members to improve Pitt’s mental health services, but didn’t know what kind of positions he is looking to fill.

For Beeson, Bonner is the right person for the job because she knows he can achieve his goals.

“This is a great opportunity for the University and for my office,” she said. “He has a great vision for Pitt.”

Beeson said she knows Bonner will succeed as dean of students because his work ethic is unmatched. He showed that in the last year as interim dean, she said.

“Sometimes when someone’s an interim they don’t want to move things ahead, but Kenyon jumped in,” Beeson said.

Humphrey, who served as dean from 2006 to 2015, said she saw Bonner as a leader and a dean of students when he was the associate dean of students — long before Pitt considered him for the job.

“I’ve watched his heart — you can’t get another heart, you’ve got the heart you have — that’s why I promoted him. I’m his greatest reference,” she said.

Mostly, though, Humphrey said she’s glad Pitt didn’t hire someone from outside the University. Hiring Bonner, she said, makes it easier for him to continue the work he and she started over the last several years.

“He and I built something really special, I’m happy it’s not being handed off to a stranger. The work that I labored over won’t go down the chute.”

Along with Bonner, the Board of Trustees also appointed two other people to senior positions within the University Friday.

At the meeting, the Board named Gregory Scott, the former assistant vice president for finance and business at Penn State University, as Pitt’s new senior vice chancellor for business and operations. It also named Susan Rogers, the former vice president for university advancement at the University of Texas at Dallas, as the new vice chancellor for communications.

Scott’s position is new and Rogers will replace the current vice chancellor for communications, Ken Service, who is slated to retire this year. Rogers will join Pitt March 31, and Scott will assume his role April 1.

In November, Service said he planned to retire this summer, but is “still working out” exactly when he’ll leave now that Pitt has appointed Rogers as his successor, he said in an email on Friday.

Bonner, on the other hand, isn’t going anywhere anytime soon.

For the student who has worked most closely with Bonner — Student Government Board President Nasreen Harun — everyone in Student Affairs now knows what to expect with Kenyon in the full position.

Bonner’s hiring, she said, “gives a sense of completion,” to the division, as opposed to the uncertainty when Bonner was only serving in the interim.

“I think now that he’s in office he can move forward with his vision,” Harun said. “I think it gives a sense of relief to the whole division. Now [Student Government Board] knows what’s coming.”

Regardless of what he chooses to tackle first, Humphrey said Bonner will be successful if he keeps students at the forefront.

“Every dean has to do what they see is good and right,” she said. “But if they keep students at the forefront of everything, you’re going to do great things.”