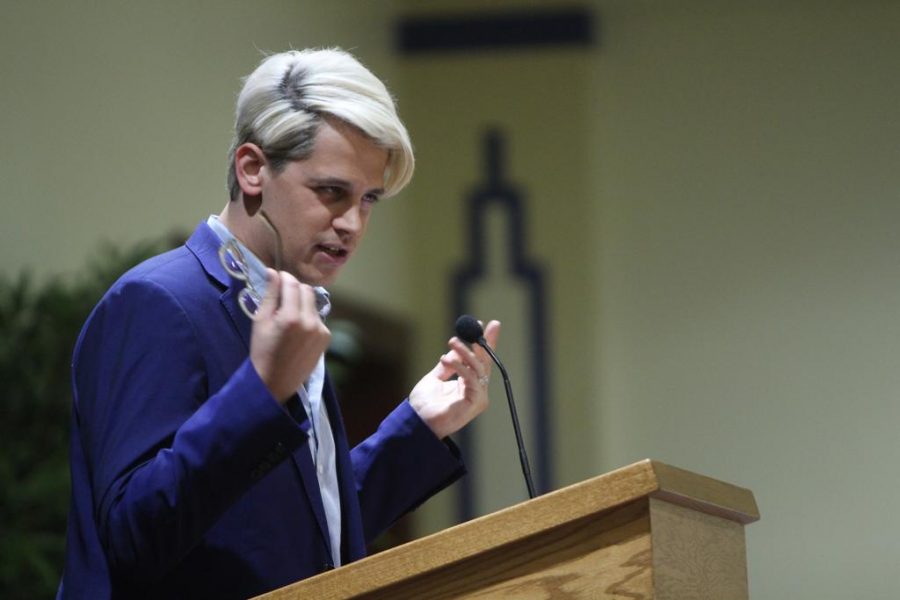 By Albert Giovanazzi and Zoë Hannah / The Pitt News Staff

College Republicans brought the gay, British sociopolitical activist to the Assembly Room at 9 p.m. Yiannopoulos’ speeches at other universities around the country have garnered protests, fights and rallies because of their highly controversial content: Yiannopoulos argues free speech should have zero limits.

“I’ve taken it upon myself to go through life as offensively as possible,” Yiannopoulos said.

As an example, Yiannopoulos asked the crowd of more than 350 people if any of them believed “that women are paid less to do the same work” as a man. When several audience members shouted, “Yes,” in return, Yiannopoulos had only one word for them:

In response, about 10 people got up and stood at the front of the stage, shouting, “Two, four, six, eight — stop the violence, stop the rape.”

As they did so, several men in the crowd began chanting, “Trump, Trump, Trump.”

Active online and on Twitter, Yiannopoulos has worked as a technology reporter since 2009 for the Daily Telegraph, the Kernal, which he founded in 2011 and Breitbart Tech, the technology section of the conservative news website. Yiannopoulos is also a conservative activist, and fueled much of the coverage of the GamerGate controversy in 2014, writing at the time that the women protesting sexism in video games and the tech industry were “sociopathic.”

Currently, he tours colleges and universities giving lectures on the importance of free speech and funds the “Privelage Grant,” a college scholarship for white men only.

Yet just as Yiannopoulos’ talk irritated many of the protesters, political science major Richard Phillips said the protesters’ disruptions affected his ability to enjoy the speech fully.

“I think they have the right to speak,” Phillips, a senior, said. “I don’t necessarily think the way they went about protesting this event was conducive to a lecture atmosphere.”

“Free speech, particularly views that don’t align with the progressive left, are shut down and silent,” Mueller said. “I think it’s great that a conservative speaker can come out and talk to students and get discussion going.”

Throughout the lecture, Yiannopoulos condemned social activist movements, such as the Black Lives Matter movement, the call for trigger warnings on college campuses from students around the country and the entire discourse on rape culture and feminism.

“I don’t want women to get drawn into lesbianism,” Yiannopoulos said, speaking of feminism. “Women have a much more malleable sexuality than men do.”

He said the Black Lives Matter movement is an act of “black supremacy” and called feminists “man-haters.”

For student activist Joseph Zubrow, the speech wasn’t worth sitting through. They stood up halfway through the event and screamed that the speaker is a Nazi, which they based on videos Yiannopoulos posted to his Twitter account.

Zubrow’s outburst garnered a response from the side of the room supporting Yiannopoulos — a lively chant in support of presidential candidate Trump.

“He believes that oppressed peoples deserve their oppression,” Zubrow said. “I’m more upset with the students for filling that f***ing room.”

Pitt police officer Scott DuBrosky said he and the other officers working at the event escorted about 17 people — most of them students — from the event for protesting, but that no protesters gave the Pitt police any problems.

He said Pitt police anticipated the highly tense atmosphere at the event and agreed with Pitt administrators before the event to remove those who disrupted Yiannopoulos’ speech.

Some students left on their own accord — a few of them sobbing.

This type of reaction is precisely what Yiannopoulos supports. If people feel uncomfortable, he said they have the right to leave, just as he has the right to say what he wants.

A genderqueer first-year student, Zubrow said Yiannopoulos’ speech was personal because it invalidated their very existence.

“This man does not believe my identity is authentic,” Zubrow said.

For Rosemary Geraghty, the business manager of the College Republicans, Yiannopoulos’ speech was problematic — but it shouldn’t be stopped.

“As a member of the LGBT community, I find a lot of what he says offensive,” Geraghty said. “But I support his right to say it.”

“Safe spaces should exist, but I don’t think the way they’re being used on college campuses is appropriate,” Geraghty said, referring to the mandatory nature of safe spaces on some campuses.

Associate Dean and Director of Residence Life Steve Anderson, who attended the event, said Pitt administrators are “viewpoint neutral” when it comes to politicized speeches like Yiannopoulos’.

“We just wanted to make sure we are supporting our students,” Anderson said at the event.

Anderson also urged students who were upset that Yiannopoulos was allowed at Pitt to approach Student Government Board with their concerns, as part of the funding for the speech came from the Allocations Committee.

Yiannopoulos thanked College Republicans for orchestrating peaceful escorts off the stage and defended the protesters’ rights to free speech.

Editor’s Note: This story has been updated.