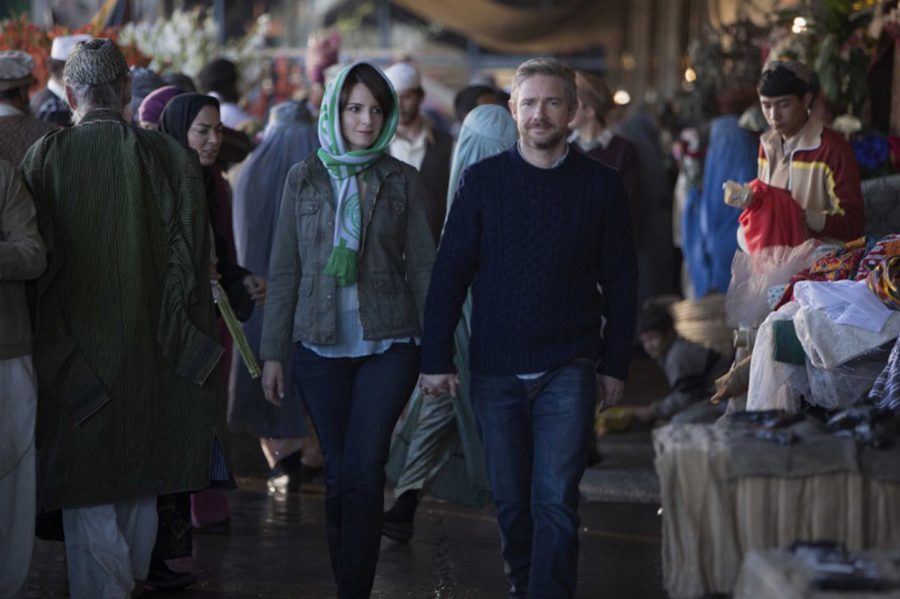 As I walked out of “Whiskey Tango Foxtrot,” I realized I still had absolutely no idea what the title meant.

The film, a close adaptation of war correspondent Kim Barker’s 2011 comedic war correspondant memoir “The Taliban Shuffle: Strange Days in Afghanistan and Pakistan,” starsTina Fey — who also produced the film — as a self-described “war comedy.” It follows Kim Barker (Fey), a washed-up New York television reporter who impulsively agrees to a gig as the chief Afghanistan correspondent for her network in the first three years of the NATO occupation.

It turns out the title isn’t as complicated or deeply entrenched in military jargon as it sounds. It draws from the NATO phonetic alphabet, which uses a specially designated word for every letter of the alphabet. The thinking goes, if something has to be spelled out over a radio, there’s less chance of an error. In this case, the sequence “Whiskey Tango Foxtrot” translates to “WTF,” a colorful description of Barker’s exotic self-discovery process in Kabul, Afghanistan.

Not that the film ever mentions NATO forces, or anything rooted in the actual geopolitical dynamics between America’s Afghan occupation — the film instead focuses on Barker’s time in Kabul among the press members’ drug and alcohol-fueled debauchery, or rather the “Ka-bubble.” The plot revolves around Barker’s crumbling long-distance relationship with her New York boyfriend, Chris — Josh Charles from “The Good Wife” — and her recent involvement with a Scottish photojournalist, Iain (Martin Freeman).

There is relatively little mention of IEDs, the brutal desert living conditions or the overabundance of street urchins in Kabul. The only Afghan character with a significant story arc is Kim’s translator Fahim, played by the white, Connecticut native Christopher Abbott from “Girls,” which tells you something about the film’s interest in accurately portraying the people of Afghanistan.

Despite Fey’s comedy transplanted into a war setting, “Foxtrot” isn’t quite “Bridget Jones’s Diary” meets “The Hurt Locker.” We see a car or two blow up and even a former marine with prosthetic legs in the final scene, but that’s about as gritty as it gets. Far more of the screen time goes to characters like a buffoon of a womanizing Islamist politician, a hunky New Zealand bodyguard and a binge-drinking blonde bombshell of a journalist played by Margot Robbie.

I point this out because the film’s underlying subplot focuses on the lack of media interest in the Afghanistan War compared to domestic stories that deliver Kim’s network higher ratings. And yet, the same film focuses almost no attention on the day-to-day struggle of the U.S. occupation.

Don’t get me wrong — many of the scenes are genuinely funny and audiences will likely find the characters and the storyline entertaining. But ultimately, I couldn’t help feeling a little sad as I watched a romantic comedy about post-Taliban Afghanistan. Maybe the Bush administration’s foreign policy mayhem lies a little too recently in the past for me. Or, more likely, I’m unable to fully appreciate a cute, heart-warming movie like this while remembering that far too few films have been made about the horrors of the war.

Fey breathes her recognizable quippy energy into Kim, and her performance is the storyline’s driving force. She brings just the right amount of Liz Lemon to her role, delicately walking the tightrope between a believable media professional and goofball, with the occasional self-deprecation in her character’s travails.

The extent to which female characters replace men as the film’s focal points is striking, especially given the extremely male-dominated world they are portraying. Trapped between the Muslim women’s burqas and the testosterone-oozing soldiers, Kim and Tanya (Robbie) mirror each other’s tremendous — and occasionally questionable — personal sacrifices for their careers.

Freeman’s banter with Fey is also highly gratifying. As the original British version of Jim in “The Office,” Freeman is clearly qualified to act alongside Fey. He’s convincing as a foul-mouthed Brit, and the two have strong on-screen chemistry. Robbie is equally captivating, and not just for her beauty. She instantly brings former CBS correspondent Lara Logan to mind in her badass Aussie war reporter character.

The cast ultimately has excellent synergy, and Fey in particular makes “Whiskey Tango Foxtrot” an enjoyable experience. You may not figure out what the title refers to, and you probably won’t care.

In all likelihood, the film will leave you smiling, which most Fey projects set out to do — but given “Whiskey Tango Foxtrot’s” subject matter, this isn’t necessarily mission accomplished.