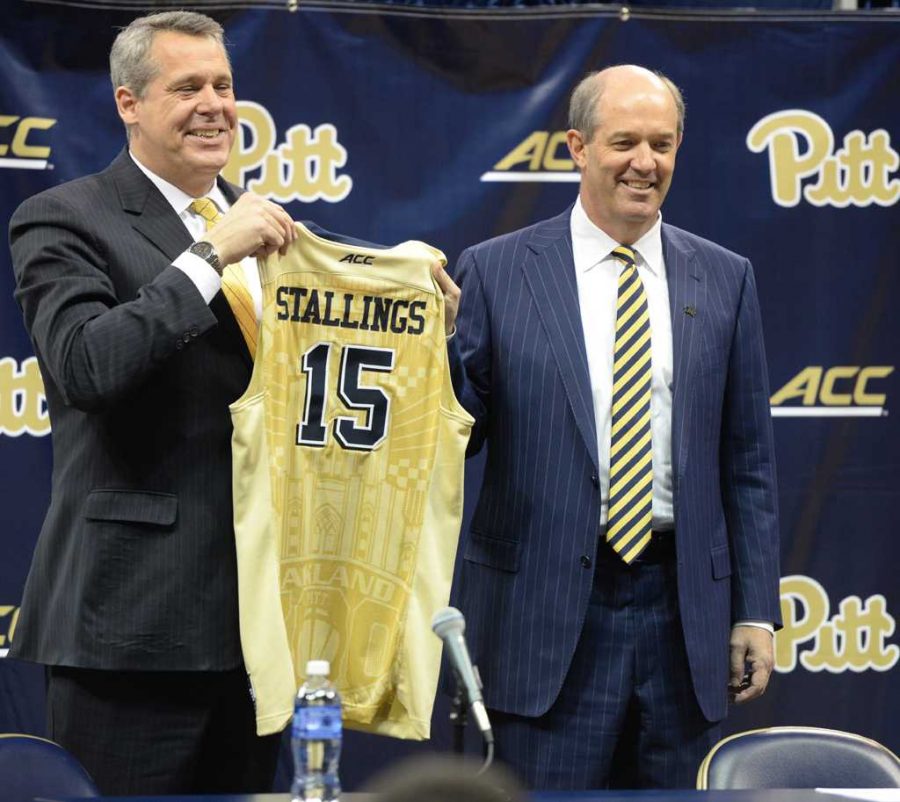 By Chris Puzia and Jeremy Tepper / The Pitt News Staff

With rumors and reports of potential candidates flying around in the days leading up to the hiring of Stallings, it was not the result many expected. That disappointment showed in some of the incisive questioning Barnes and Stallings fielded at the introductory press conference.

But was that outcry warranted? Two Pitt News writers are here to debate the merits of the Stallings hire: Chris Puzia to defend it, and Jeremy Tepper to critique it.

Chris: First, I’d like to say I am still moderately skeptical of the hire. I was critical of it as well on Twitter for days, but over time I have slightly warmed to the idea. While I am still not overly excited about it, I am intrigued enough to play devil’s advocate and defend the move.

I know most of Pitt Twitter — myself certainly included — was pretty doom and gloom for most of Saturday night through Monday afternoon. I think part of that has to do with the names rumored prior to Stallings, like Sean Miller and Brandin Knight, who many people view as more favorable. But in regard to many of these young, up-and-coming coaches, I would argue Stallings presents a higher “floor” than those. With a Pitt program that has made its name on consistently being at least in the NCAA Tournament conversation, from a recruiting standpoint, that matters. I think taking out this first year — because with any coaching hire, there will be attrition and talk of transfers and decommitments — Stallings has a better chance of keeping the program afloat until he can imprint his specific coaching and recruiting brand on Pitt.

Jeremy: After complaints over the past few seasons of the basketball program stagnating under Jamie Dixon, fans were looking forward to anybody that could help the program reach greater heights. That could have been an up-and-comer with a knack for recruiting — more likely — or a well-established coach with a history of winning in a major conference — less likely.

Stallings is established, sure, but only as a decent coach with a reasonable level of success. In his 17 years at Vanderbilt in a perennially weak SEC conference, the 55-year-old coach only brought his team to seven NCAA tournaments, never getting past the Sweet 16. There is no potential with this hire. The best case scenario is that Stallings is able to keep the program at the level where it was headed, which is a yearly bubble team.

It is true that the bottom will likely never fall completely out under Stallings. There will be years that his teams don’t make the tournament, but they will probably never be completely inept. Stallings will keep the program afloat, but Pitt needed someone who would be able to get it to swim.

We know who Stallings is: a veteran retread who was likely a year away from the Commodores firing him.

Chris: I think his initial moves, especially with the heat he’s already gotten, have been solid. And so far, that’s all we can use to judge his Pitt tenure. He made peace with Sheldon Jeter, he already offered a solid guard, and he appears to be maintaining Dixon’s final recruiting class.

One question I would ask about this whole process: If Twitter didn’t exist, would people still criticize this move so much? Part of the anguish stems from that brief time people thought Sean Miller was on campus and was a legitimate option, and then the Brandin Knight, Andy Enfield and Will Wade rumors caught fire, making Stallings seem like a last resort. Then, when it became official, the Twitter backlash was so strong that many — including me — got swept up in it. Now, the narrative seems to be shifting a bit from “terrible hire” to “let’s give the guy a chance.” Do you think if Twitter was not a factor, you would hate the move as much?

Jeremy: Hypotheticals are difficult, but yes, I believe I would not approve of this move, Twitter or not. The first time Stallings’s name started to appear, I thought it would be a bad move. I’ve maintained that position from before it became such a hotly discussed topic till now.

Look, Sean Miller was never a realistic possibility. Will Wade might have been, and so might have Andy Enfield. I haven’t gotten caught up in those names, though. Given Pitt’s financial commitment to athletics, its success under Dixon and high-end facilities, there’s no reason why Barnes couldn’t have filled that position with someone better. I have a hard time believing, that, at the very least, a promising young coach from a mid-major wasn’t a possibility.

Maybe Barnes truly believes Stallings is the best man for the job. But my inkling is that some candidates turned Pitt down and it was unwilling to meet the price demands of others.

It’s the archetype that Stallings falls into — an old coach that has peaked, and not at an entirely high level — that really bothers me. With Stallings, my primary question is, where’s the potential?

Chris: I think there is always potential, and a change in scenery can bring that out of a coach. Look at this year’s Final Four coaches. Oklahoma’s Lon Kruger had not advanced further than the Sweet 16 until this season, and he came to Norman after seven years at UNLV where he only advanced out of the first weekend of the NCAA Tournament once. In fact, this year is the furthest he’s gotten as a coach since 1994, making the Final Four with Florida.

Stallings has shown the ability to recruit from all over: Vanderbilt’s two NBA prospects from this past season came from New Jersey and Louisiana, and he has also plucked professional talent from New Mexico — Jeffery Taylor — and California — Festus Ezeli. The fact that he’s kept Corey Manigault, who seemed likely to leave after Dixon did, based on the coach’s in-game strategy speaks to his skill.

And not to ignore the elephant in the room that Stallings and Barnes have willfully addressed: He can now recruit certain players that he simply could not at Vanderbilt due to higher academic requirements. I am not as concerned about Vanderbilt’s unspectacular records in a lesser SEC — as many have noted, the Commodores have little tournament history, last making the Elite Eight in 1965. Now that Stallings has more reign to recruit — which as I mentioned, he’s proven he can do — we could definitely see a step up from his recent years.

Jeremy: Barnes has really tried to hammer that point that Stallings had a lower ceiling at Vanderbilt due to academic requirements holding back his recruiting, but I don’t really buy that. Certainly, he wasn’t able to recruit as many prospects as other schools for those reasons, but let’s not ignore the advantages that come with higher academics. At Vanderbilt, Stallings had the unique sell to recruits of being able to play big-time basketball, while also receiving an excellent education. For the prospect that can meet those requirements, Vanderbilt provides a mix of academics and athletics that few schools can match.

Even if I were to concede that Stallings will recruit better at Pitt, I’m not sure that increases his potential, as he’s now coaching in a better league. As it stands, the ACC is probably the best basketball conference in college, while the SEC is one the worst out of the Power Five. Just this year, the ACC placed seven teams in the NCAA tournament, compared to the SEC’s two.

All things considered, I’d say those two factors even out. That leaves us to evaluate Stallings by his resumé, which isn’t all that good. I’m willing to give Stallings a chance and a few years to bring in some recruiting classes before deeming him a success or failure.

Still, when that time comes, I can’t help but think Barnes will be wishing he had a do-over.