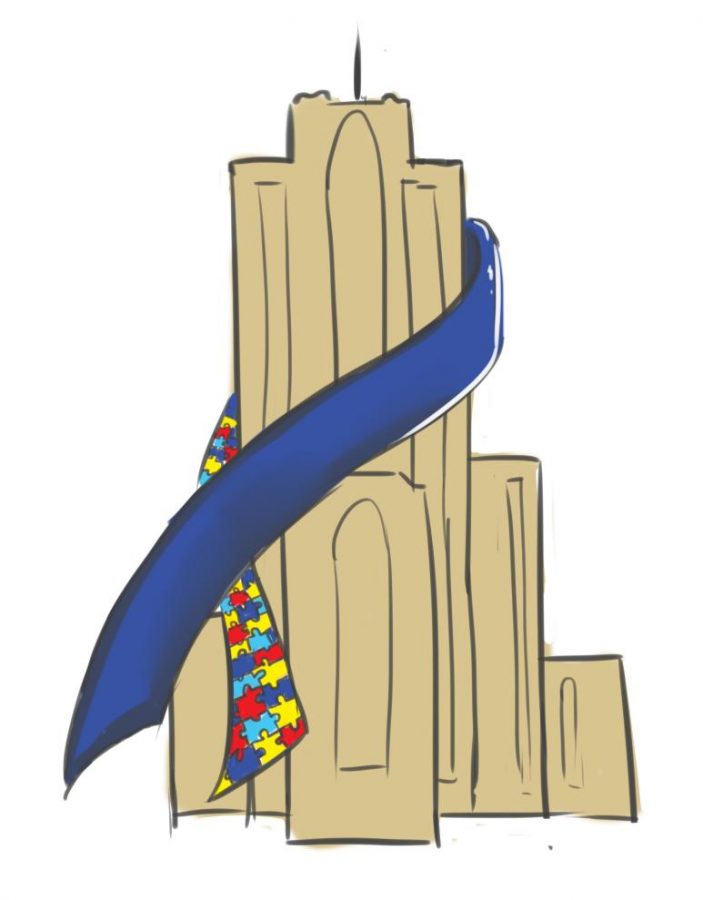 By Isabelle Ouyang / For The Pitt News

When you walk past the Cathedral of Learning Saturday night, you might notice an eerie blue glow.

You might take a second look and be on your way. When you mention it in passing over lunch, you might learn it has something to do with autism. As we head into Autism Awareness Month, I urge you to go much further.

This year, the Cathedral of Learning will once again take part in Light It Up Blue, an Autism Speaks campaign to celebrate World Autism Awareness Day.

Cathy will be one more addition to a long list of prominent structures that take part in the annual event, including the Empire State Building, the Air & Space Museum and Universal Studios in Hollywood and Orlando. But behind the blue lights and the feel good sentiment, does Autism Speaks actually speak for the autistic community?

Autism Speaks is an organization that sponsors autism research and outreach and is arguably the leading Autism Spectrum Disorder awareness organization in the nation. Despite the organization’s prominence, a growing number of autism advocates are speaking up against it and demanding to be heard.

One of the biggest criticisms of Autism Speaks is that, despite its name, the organization excludes autistic voices. Autism Speaks was founded in 2005 by allistic (non-autistic) couple Suzanne and Bob Wright, grandparents of an autistic child. Consequently, the organization has had a history of ableist rhetoric that advances misinformed stigmas rather than addressing autistic people’s needs.

Most famously, Autism Speaks distributed a controversial video (now taken down) titled, “I Am Autism.” In it, a deep voiceover compares autism to the onset of pediatric AIDS, cancer and diabetes combined. The video also implies that autism ruins happy marriages, but arguably the most hurtful and cruel statement it makes is: “I will make it virtually impossible for your family to easily attend a temple, birthday party or public park without a struggle, without embarrassment, without pain.”

Cori Frazer, president of Pittsburgh’s chapter of Autistic Self Advocacy Network and a self-identified autistic person, was diagnosed long after childhood and started to work on Pittsburgh’s own ASAN chapter midway through the summer of 2014. Frazer was diagnosed with ASD in 2013, after obtaining an undergraduate degree at Pitt. Throughout college, Frazer experienced difficulty engaging with professors and students. They discovered ASAN through the support of the online autistic community.

“Autism Speaks uses a really engaging narrative that makes parents of newly diagnosed children afraid. When you’re listening to this constructed narrative that your child has an awful disease that is going to break up your marriage and Autism Speaks is working on a cure, of course folks donate,” Frazer said in an email. “Autism Speaks makes people afraid, and fear is powerful.”

ASAN, whose motto is “Nothing about us without us!” focuses on self-advocacy within the autistic community: the idea that autism advocacy should be run by autistic people.

“We could be doing better,” Hughes said, adding that Autism Speaks has reduced its focus on early intervention, and more on services across the lifespan of ASD individuals. “The motto [of Autism Speaks] used to be ‘early intervention is key,’ but so many of our kids have grown up … Our kids were younger when the organization first started.”

“When Christian was diagnosed, he had little language [abilities] and a lot of self injurious behaviors. Now he is a prime result of early intervention and treatment — people committed to his well-being and success,” Hughes said.

Best intentions aside, Autism Speaks started as an organization by and for families with young autistic children. Families are only now coming to understand the needs and demands of their growing autistic children. Autistic adults have always existed, and now that they are willing to self-advocate more than ever, a grand shift in representation is long overdue.

“Autistic self-advocacy … is integral to our ability to practice autonomy and self-determination in a society that casts autistic and otherwise disabled people as props in our own stories,” Frazer said. “… You cannot have a truly just movement to support any population without including their voices.”

Since the “I Am Autism” debacle, Autism Speaks has attempted to clean up its rhetoric. In 2006, Autism Speaks prompted the Combating Autism Act, called a “federal declaration of war on the epidemic of autism” by the co-founder of Cure Autism Now, Jon Shestack. In 2014, it was renamed the Autism CARES (Collaboration, Accountability, Research, Education and Support) Act. Late last year, Autism Speaks finally appointed two autistic board members, raising the percentage of autistic people in the Board of Directors to 6 percent. The standard for centers of independent living, nonprofit advocacy organizations run by individuals with disabilities, is 51 percent in both the staff and Board of Directors. Previously, Autism Speaks had a single autistic member on its Science and Treatment Board, John Elder Robison, who resigned in 2013.

On his WordPress blog, Robinson penned an open letter explanation. After a “series of public relations mishaps,” an op-ed by co-founder Suzanne Wright was Robison’s last straw: “… my words and efforts have had no real impact on the beliefs of the actual leadership of the organization.”

Autism Speaks was founded on the ideological approach toward autism as a disease that can be eradicated. Tacking two autistic people onto the Board of Trustees doesn’t change this. Autism is not a disease. It is not an epidemic. It is a neurological variation. Its community is highly diverse and has a broad range of needs. Some of these needs include addressing significant health risks and medical challenges associated with ASD, and some of these needs include assisted living and counseling. The narrative that Autism Speaks has constructed over the course of its establishment relies on the fear of these risks, rather than a comprehensive understanding of ASD.

Charity Navigator, an independent charity evaluator, gives Autism Speaks a 2/4 financial rating. While it scores high on transparency and devotes 44 percent of its annual budget to research, the research is highly focused on changing social behaviors of autistic children or seeking a gene to eliminate. Out of 13 major science/research grants in 2015, at least one active study still refers to ASD as a “devastating disease.” Six are categorized under “treatment/prevention.” Eight involve studies in behavior or “behavioral intervention.” This is despite the website’s careful classification of autism as a neurological disorder. Meanwhile, only 4 percent of its budget goes to “family services,” which directly helps autistic people and their families.

“Autism acceptance means listening to and promoting autistic voices. We are producing huge amounts of literature — online and offline — about our lived experiences, our needs and how we can best best be supported in our communities,” Frazer said.

When contacted for comment, the national office for Autism Speaks did not immediately respond.

So when you see Cathy light up blue, a reference to Autism Speaks’ blue puzzle piece logo, don’t let Autism Speaks do the talking. Instead, listen to the autistic community.

Write to Isabelle at [email protected]

Editor’s Note: A previous version of this article misidentified Autism Speaks as ASAN and misidentified John Elder Robinson as Jay Robinson. The article has been updated to reflect these changes.