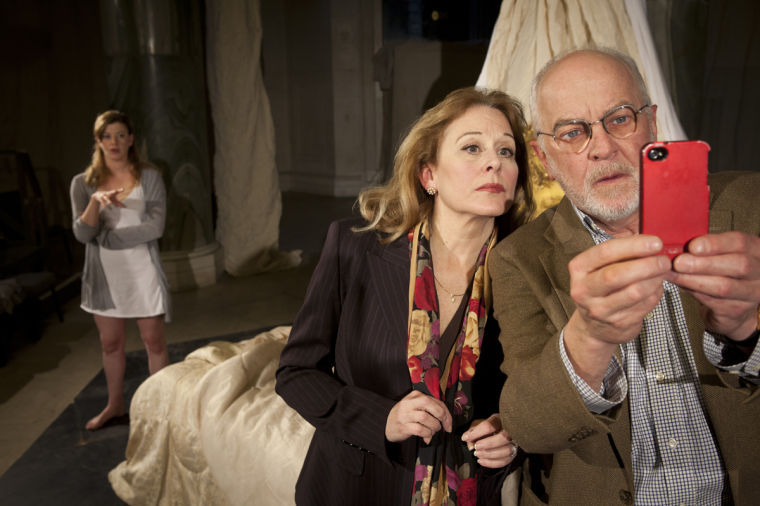 Stage presence is an ever-important aspect of performance. How actors carry themselves onstage announces the nature of their existence in the space to the audience and other actors. Great stage presence not only draws attention to the performers, but also silently articulates how they affect the world they occupy and how that world — its history, its places and its memories — affects them.

Yet the most powerful element of Quantum Theatre’s staging of J.T. Rogers’ “Madagascar” on Friday at The Carlyle in Downtown is the confounding — even maddening — effect of absence. For all the presence the actors command, their painful memories, unanswered questions, inescapable guilt and, ultimately, their vain dreams of respite from those elements are forever tethered to the lives of players we never see.

With a cast of three characters, each of whom occupy the same luxurious hotel room overlooking the Spanish Steps of Rome at different points in time, “Madagascar” touches on a dizzying number of topics over its roughly 90-minute span. Foremost among them, though, is the relentless grip the past holds on those who desperately seek to evade it.

The play opens with June (Melinda Helfrich), a statistic-spouting tour guide of Roman monuments who spends her days narrowly focused on the present, painfully plodding forward step by step in the hopes that she will be able to generate distance between herself and the painful memories that loom just over her shoulder.

Five years earlier, in the same hotel room, June’s wealthy mother Lilian (Helena Ruoti) downs wine spritzers and impatiently awaits the return of her son Gideon, who had previously fled to Madagascar, where his now-deceased father, Arthur — a brilliant and successful economist — once worked.

Self-assured and cruelly funny, Lilian professes her mantra early on, saying that “without comfort, happiness cannot be found,” and wastes away the time by recounting her life as the affluent and sometimes lonely wife of a brilliant, driven man — an existence that involves quite a bit of interaction with boorish, inarticulate economists.

It’s easy to draw parallels between Lilian and many of the antiquated, privileged matriarchs that populate our television screens (such as “Arrested Development’s” Lucille Bluth or Sterling Archer’s mother, Mallory), but Ruoti brings a tenderness to her performance as Lilian that gives her comedy a bitter edge.

The third character, Nathan (Larry John Meyers), is one of the aforementioned economist boors. A friend, coworker and apostle of Arthur, he is a sad and uncharismatic beta male whose only hope for success in life is to carry Arthur’s legacy as far as his short-sighted mind can go, simultaneously motivated by and haunted by his survivor’s guilt over Arthur’s death.

Staged in the eerily hollow lobby of The Carlyle, Quantum’s thoughtful choice of setting once again perfectly suits its script. The neoclassical marble columns and unsettling sense of what once was — a familiar feeling for many Pittsburghers who have gaped at the city’s once-stately structures — fits beautifully into the play’s somewhat gloomy interpretation of antiquity and makes it even more relatable.

The setting plays strongly into the characters’ views of the past. Tales of wandering through the Forum as children are used to frame the deep-seated familial conflicts, and the myths of Roman history become stand-ins for the myths the characters perpetuate in their own lives.

The fourth wall acts as the screen in a confessional — each actor takes their turn confiding in us the trangressions and bitter memories they fear have brought them where they are today. This approach closely mirrors everyday conversation — we rarely witness the pivotal points in the lives of others. Instead, we must reconstruct them from what we are told, often while most of the players involved are absent.

This exercise in reconstruction is executed perfectly, as the characters recount their intertangled tales, each one carrying a new revelation that allows our knowledge of their shared morbid past to build in painful increments.

Though none of the actors ever leave the stage, neither do they ever truly interact — they never touch, look at or acknowledge the presence of the others. They are simultaneously isolated from all others and surrounded by their presence — and their legacy.

Yet many of the same devices that contribute to the play’s success are also integral in its flaws. Though the tales that are recounted are truly poignant, acting as a confidant for a single stranger’s darkest secrets — let alone three strangers’ — can be exhausting. As a result, the play’s dramatic revelations feel more and more tiresome, which ultimately cheapen the play’s final moments, leaving us feeling cold.

Yet in spite of this arduous conclusion, “Madagascar” is a success. It’s a play that forces us to contend with how the questions made by one’s absence can at times be more damaging than their presence.