‘RoboCop’ not quite an upgrade 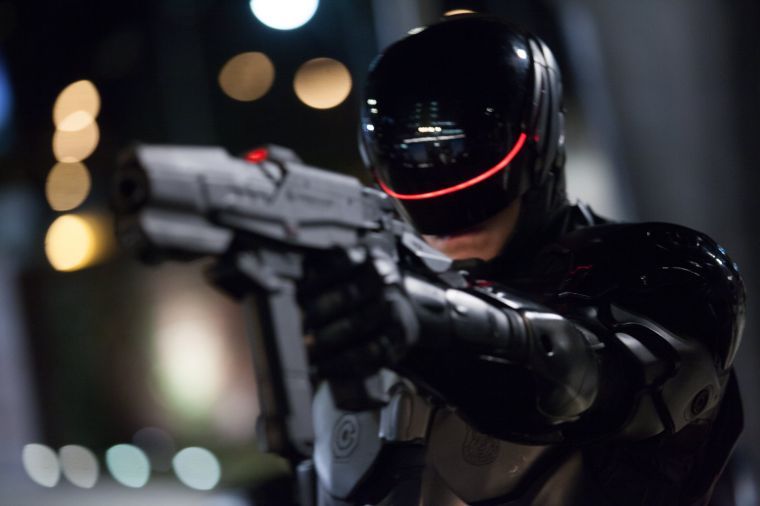 In order to truly understand why 2014’s “RoboCop” is so awful, you must first realize why the original 1987 version is still revered as a cult classic.

In the summer of 1987, amid rising crime rates and at a time when the deregulating mechanisms of Reaganomics had taken full effect on the American consciousness, “RoboCop” made its debut. On the surface, it was a gory, cheesy and seemingly mindless sci-fi flick about a futuristic tin man who fights an evil corporation — with plenty of face-melting chemicals and explosions along the way.

Give “RoboCop” a second glance, however, and the film gives you a more critical take on the brazen consumerism of the era in which it was made. The film is littered with jabs at our collective obsession with acquiring the newest shiny toy and the way it affects our own humanity. Advertisements for purchasing new, high-performance hearts or nuclear-annihilation board games play throughout the film.

In one particularly amusing scene, a man holding the mayor at gunpoint demands a new car “with leather reclining seats and sh*tty gas mileage.”

In the 27 years since the original “RoboCop” first made waves, anxieties over the role of technology in our lives have become exponentially more widespread and complicated.

From the NSA’s PRISM program to the use of predator drones or even questions about whether or not our thousands of friends on Facebook are making us lonelier, it seems that nearly every facet of our lives has been bathed in the pale light of a glowing screen — making “RoboCop’s” blood-soaked critique of capitalism’s dehumanizing nature seem naive by comparison.

But if the original “RoboCop” comes off as a dated critique of modern ills, the cult classic’s hackneyed update is something worse: a moronic action flick that uses the modern issue of drone warfare to masquerade as relevant. The result is a glossy, run-of-the-mill, shoot-em-up science-fiction film that goes out of its way to insult the intelligence of anyone who came to the theater expecting the social satire of the original. Director Jose Padilha would much rather have you sit in awe of all his special effects and gadgets, whispering “I’d buy that for a dollar” to the person sitting beside you.

Like the original, this reboot of “RoboCop” opens with a news broadcast from the future (the year is 2028) — albeit with a modern, star-powered twist. Standing in front of a flashy graphic, “Novak Element” host Pat Novak (Samuel L. Jackson) emulates Bill O’Reilly and a host of other news pundits as he goes on a diatribe against America’s reluctance to use drones to protect its own streets, even though they are being used to crack down on violence in every other nation on the globe.

The film then cuts to 2028 Tehran, where a news anchor reports on the happiness of the city’s residents while cold, inhuman robots frisk-search every home with eerie calm. It’s arguably the film’s best scene — combining elements of New York’s Stop and Frisk policy with drone warfare for a chilling effect. The horrors of an inhuman, invasive surveillance state are apparent for all to see.

Once this scene establishes the movie’s supposed relevance, however, the film plummets into a gutless (it’s rated PG-13) retread of the original script with lazy, superficial updates.

In order to convince the public that a drone police force will benefit them, Detroit-based OmniCorp — the corporation that manufactures most of the world’s drones — decides to take a fatally injured police officer and rehabilitate him into a crime-fighting cyborg that will put a friendly face on mechanized law enforcement.

Elsewhere in Detroit, Alex Murphy (played by the shockingly underwhelming Joel Kinnaman) — an incredibly boring cop with a knack for seeking out corruption within the Detroit police force — has his cliched, dollhouse suburban life ripped to shreds by a car bomb planted by a corrupt officer on the force. With his life on the line, Murphy’s equally uninteresting wife signs his life over to OmniCorp, where Dr. Dennett Norton (Gary Oldman) uses “science” to transform him into RoboCop, stripping him of his humanity in the name of efficiency.

From there, the film explores one of life’s great questions. Namely: If you make the world’s most boring man into a robot, can anyone tell the difference?

Perhaps this isn’t quite the question Padilha was going for, but Kinnaman’s monotonous performance is so depthless that he feels just as robotic before donning the sleek Robocop suit as afterwards.

Kinnaman’s lazy, uninteresting performance is symptomatic of the entire movie. As it rushes through a series of stereotypical discussions of Norton’s discomfort with making a man into a machine, the film shoots and smashes its way through a series of stylish crime busts, all the while paying lip service to moral dilemmas without taking the time to think any of them through.

Throw in some cringe-worthy lines — such as Murphy’s partner Lewis telling a suspect that this isn’t “good cop, bad cop. It’s bad cop, RoboCop” and the occasional clumsy lampoon of 24-hour-news networks from Samuel L. Jackson’s character — and the complete package winds up feeling like the shameless, money-grubbing reboot it is, rather than the smart update it could’ve been.