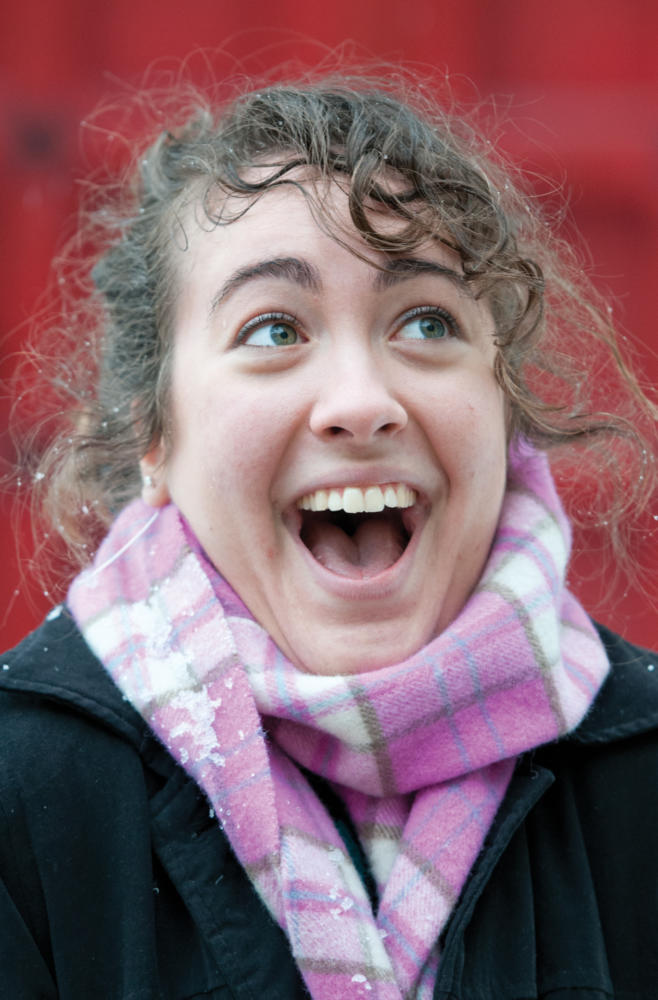 Whether she’s on a stage or in a classroom, Cassandra DellaCorte won’t stand — or sit — for sexism.

“Part of the reason I sit like an animal, with my legs everywhere, is because we all deserve space ... so I take up a lot of space,” she said, speaking about women's tendency to fold their bodies in while men spread out.

DellaCorte is the vice president of Ruckus, a student improv group which formed in 2012. Gender politics continuously play a role in her life, and, when she looks to older comedians for inspiration, she confronts a serious rift.

“It’s hard because I’m pretty damned feminist and a lot of the people I’m trying to emulate are white dudes,” DellaCorte said. “It’s harder when they all look like the establishment ... like, when I grow up, I want to be a 50-year-old man.”

Despite the lack of diversity in the current comedic world, for DellaCorte, inducing laughter with her impulsive antics during Ruckus’ shows is still “such a high.”

“Being involved in Ruckus is kind of an easy sell, because you get to hang out with your friends and make jokes and sing songs and make people laugh,” DellaCorte said.

On a Sunday afternoon in the Cathedral of Learning, DellaCorte sits at the front of the rows of desks filling the room for a weekly four-hour practice. Some prospective jokers come and go, which DellaCorte said is OK, because improv performers “are still students, too.”

During the practice sessions, the troupe plays games to improve its improv skills. One of the games the group plays includes a gameshow-like exercise called “Good, Bad, Worst,” in which the audience asks the host a question, usually for advice, and three performers give either good, bad or worse advice.

DellaCorte eats couscous out of a glass jar as she watches the performance unfold. She covers her mouth with her hands as she chews and laughs at the jokes her colleagues come up with. She’s dressed in a teal track jacket and wears silver earrings that are long, like miniature elephant tusks. She has long, brown curly hair that she clips into a heavy bun at the back of her head, except for her bangs, which curl across her forehead.

When the exercise is over, DellaCorte stops laughing and starts critiquing. The performers look to her as she gives advice to the members who just completed the exercise.

DellaCorte is easygoing, but she has rules. She urges her peers to not offend audience members, even for a laugh.

“In general, I don’t find offensive comedy funny. There are so many things in the world that are innocently funny. You don’t have to offend people,” DellaCorte said.

Despite her busy schedule with Ruckus, which includes one weekly practice, two weekly on-campus shows and a podcast every Saturday afternoon, she still lives a life off the stage.

“I have a whole other life that the Ruckus members don’t know about,” DellaCorte said.

She’s currently re-watching every episode of “Gilmore Girls” on Netflix. She also enjoys making pizza cups — like cupcakes, but with pizza.

DellaCorte is a junior majoring in history and communication with a French minor and a certificate in global studies. She studied Modern Standard and Egyptian Arabic for her freshman and sophomore years. Last summer, DellaCorte studied abroad in Jordan, where she studied Jordanian colloquial Arabic. She said she got to see some of the myths about the Middle East she’s noticed in American culture debunked during her travels.

“We have this caricature of the Middle East as Americans, that it’s just violent and unhappy, but there is this incredibly welcoming, vibrant culture,” DellaCorte said. “It’s easier to stereotype entire groups of people when you don’t see them or come into contact with them.”

DellaCorte hasn’t quite pinned down what she wants to do when she graduates and ad-libs fake plans as she goes.

“I don’t have to be a historian. I can do lots of things. I tell almost everyone something different,” DellaCorte said. “I want to be Ryan Seacrest.”