Pitt graduate fights for health care reform, one film at a time 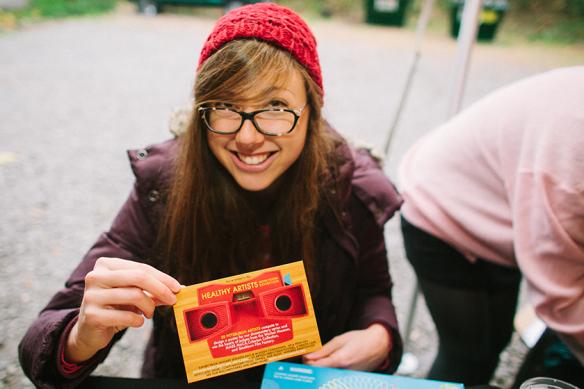 In the gym of the Kingsley Association, volunteers and visitors danced along to the jingly, toe-tapping tunes of local indie-poppers Delicious Pastries as the band’s music ushered in the Greater Pittsburgh Arts Council’s Health and Housing Fair. Outside, in the lobby, a collection of more than a dozen original posters regarding health and well-being hung on the walls.

These elements of the fair — art, music and an upbeat atmosphere — would likely come as no surprise for a fair focused on creative people.

However, a lecture being held just a room over revealed a very different side of the life of an artist. Inside, a room occupied by stern-faced individuals — most of them independent artists — sat with notebooks open in front of a PowerPoint presentation about taking advantage of the Affordable Care Act to either gain health insurance or upgrade the insurance they already have.

Among them is Julie Sokolow, a documentarian, writer, Pitt graduate and co-organizer of the day’s events. As the lecture winds down, Sokolow is a maelstrom of congeniality, rushing from person to person to thank them and encourage them to take further steps to make a foray into the world of health insurance.

It’s fairly uncommon to picture artists in a room sweating health care logistics — by their own admission, some in the room had never spent much time thinking about health care.

As Pittsburgh conceptual artist and head of Literary Arts Boom Paula Levin sees it, there’s a lack of dialogue about health care, despite what she called Pittsburgh’s “vibrant arts community.”

“A lot of the arts community here already knows each other, but they aren’t necessarily talking about issues of health care,” Levin said.

That’s what Sokolow is trying to change. With her organization, Healthy Artists — which will partake in a lecture on single-payer health care in Pennsylvania tonight at Shadyside’s First Unitarian Church of Pittsburgh — the 26-year-old Pitt graduate has used her skills as a writer and documentarian, along with her established ties to the Pittsburgh arts community, to create a dialogue within the community about the role of health care in the lives of artists.

From Chancellor’s Scholar to starving artist

As Sokolow sees it, her emergence as a relevant political and artistic presence in the local arts scene would probably never have occurred without the University of Pittsburgh’s decision to offer her a full-ride scholarship.

Sokolow grew up in the suburbs of Holmdel, N.J., an area that, according to Sokolow, isn’t known for a robust arts scene.

“I grew up with everyone in my suburban community kind of rolling their eyes at the arts,” she said.

For this reason, she never saw pursuing a future in a creative field as a worthwhile or pragmatic endeavor. But after receiving the University of Pittsburgh’s prized Chancellor’s Scholarship, she felt far more comfortable exploring her creative side. Along with psychology, Sokolow began taking classes in film and fiction writing, and she eventually graduated from Pitt in 2009 with a Bachelor of Philosophy degree, a double major in fiction writing and psychology and a certificate in film studies.

It was this combination of psychology and film that eventually became the driving force in her documentaries, which Sokolow described as “doing character studies through film.”

“I like to focus on singular voices. … I like the issue of mental health in creativity and people who are kind of constructively approaching the issues through art,” she said.

After graduating, Sokolow found out firsthand what being an independent artist was all about as she began sustaining herself on freelance writing and filmmaking gigs, largely sought out through Craigslist. Though the gigs weren’t all bad, they offered none of the financial stability of a steady income.

Moreover, she realized that though she was on her parents’ health insurance, she would skip trips to the doctor just to avoid the co-pays that, though small, could threaten to destabilize her somewhat fragile life as a freelancer.

Shortly after graduating and finding herself in this situation, Sokolow began attending the local meetings of Health Care 4 All PA, an organization that has been pushing for Pennsylvania to adopt a single-payer health care system. She spent time speaking with various members of the organization, including Molly Rush, the founder of the Thomas Merton Center.

“They were kind of like mentors to me,” she said.

Sokolow began to realize that through her work as a documentarian, she could put a human face on health care while simultaneously creating a dialogue about the health-care-related issues that independent artists face every day.

In a survey conducted by the Artists Health Insurance Resource Center and published on Oct. 15 of this year, 43 percent of artist respondents lacked health insurance of any kind — more than double the statistic for the general populace.

Thus in 2011, Sokolow began working on a documentary series that profiled different artists around the city of Pittsburgh, giving them a place to talk about their work, their inspirations and their struggles to find affordable health care.

The short pieces have profiled a range of different independent artists, ranging from comedians to poets and many in between.

Since Sokolow began, the organization has grown from a solo project to a loose collective of artists, documentarians and writers who all pitch in what they can contribute, ranging from posters that spread the word about Healthy Artists to directing their own films for the project.

According to Christiane Leach, the artist relations coordinator at the Greater Pittsburgh Arts Council who reached out to Sokolow earlier this year to help organize health care seminars, Sokolow’s work has put Pittsburgh’s artists — many of whom must deal with health care difficulties in some way or another — into a far more productive conversation about health care.

“We all experience these issues. … We’re always talking about it, but the film that she’s done has really given it a focus,” Leach said, adding that many Pittsburgh artists are “just thinking about [health care] differently” since seeing Sokolow’s work.

Randie Snow, who works as a freelance graphic designer and assemblage artist, agrees with these sentiments.

“They’ve brought an awareness to us as independents and freelancers,” she said. “I wasn’t paying attention to [health care] until now.”

Along the way, Healthy Artists has gained recognition from national outlets such as The Huffington Post, and members of the group write blogs for Michael Moore’s website. They have also worked with State Sen. Jim Ferlo on creating films in support of Senate Bill 400, a piece of legislation proposed by Ferlo and five other state senators last April that would establish single-payer health care in Pennsylvania.

Though Sokolow has worked to help artists gain health insurance in anticipation of the Affordable Care Act’s Dec. 15 deadline, she believes that the act is not the final step to health care reform, and she would like to see the type of legislation that would “take the profit motive out of health care” altogether.

Sokolow’s work as a documentarian hasn’t just been about making the case for Senate Bill 400, though.

From looking at a day in the life of a Russian monk to exploring the local transcendental meditation scene to leafing through the thousands upon thousands of comics that can be found in an Elwood City, Pa., basement, Sokolow’s films have examined some of the quirkier facets of Pittsburgh life.

Her work spans a broad range, but all return to a single element — exploring the glories and mysteries of Pittsburgh and putting the spotlight on the sometimes marginalized characters around her. Her short documentaries — the most recent of which was a piece, featured on the Time magazine website, on local hip-hop enthusiast and comic book artist Ed Piskor’s new book, “Hip Hop Family Tree” — are each a window into one of the myriad strange lives that exist across this city.

In 2012, Sokolow received a grant from the The Pittsburgh Foundation to create a full-length documentary called “Aspie Seeks Love,” which follows the life of local resident David Matthews, a local artist and writer who discovered at the age of 41 that he has Asperger’s syndrome — a disorder on the autism spectrum that is often characterized by difficulties with social interaction.

Sokolow has been spending her time with Matthews as he attempts to come to terms with his diagnosis — and try to find a date while he’s at it.

Though it is a challenge to juggle health care activism with these other works, Sokolow attributes much of her success to the willingness of her fellow artists to work together, and she believes that this attitude among Pittsburgh artists is what makes this city so promising.

“People here have a collaborative ethos,” she said.