It’s not a giraffe: the truth about Pitt’s mystery sculpture 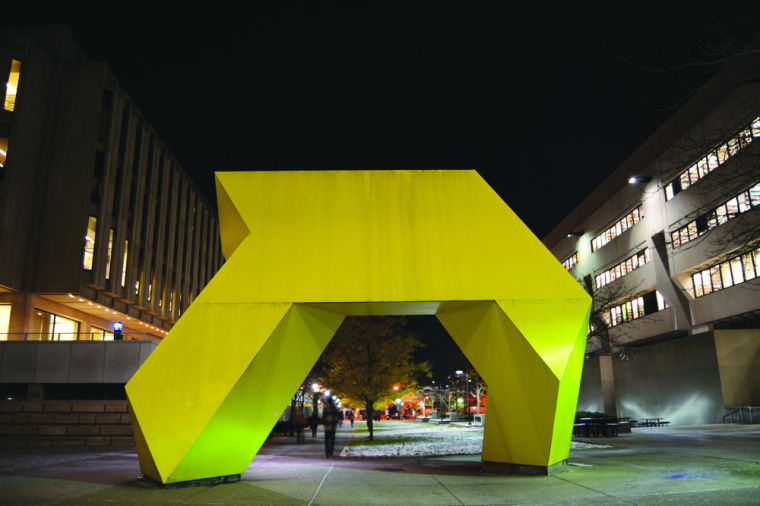 As the cool autumn air whisks its way into Pittsburgh and strips away the amber foliage, the taxi-yellow sculpture that sits between Posvar Hall and Hillman Library seems to shine even more brightly. But what exactly is this mysterious sculpture?

Possible answers as to its identity range from awkward giraffe, abstract mathematical equation and the occasional claim that it is a tribute to Steelers pride.

While Pitt Pathfinders might casually mention it as they lead prospective students around campus, there are no markers that explain what this sculpture is, who made it, why they did so or even how it came to be plopped on Pitt’s campus. To the masses of Pitt students who walk by, around and under this yellow beacon, it remains either anonymous or a relic of some random alien deposition. The work’s identity was only revealed to me through an exercise in my public art class. An official Google search, only armed with the name of the work, “Light Up,” and the name of the artist, Tony Smith (who lived from 1912 to 1980), indicated to me that the only information available on the strange sculpture came from the ever-unreliable Wikipedia.

Unsatisfied by Wikipedia’s un-sourced and vague explanation for this piece, I investigated further.

After many a sleepless night spent with the University Library System search engine, one too many Red Bulls and a new geometric yellow monster chasing me in my dreams, the time for some serious Google News searching had come.

A week of failed attempts later, I finally struck gold with a newspaper clipping from the Pittsburgh Post-Gazette. As my tired eyes read the 1989 article, it was as if the clouds had opened and the shining tale behind this piece had been inscribed on a digital tablet floating down from the heavens.

In 1971, the Westinghouse Electric Corporation wanted a piece of statement artwork to place outside their headquarters at the Gateway Center.

At this time, large companies felt that they needed to show the public that they were not only successful, but that they had a sense of taste and culture. Westinghouse had set aside $400,000 for its art program and had already accumulated an astounding 1,070 works.

However, the heads of Westinghouse weren’t satisfied with its holdings. They wanted a “wow factor” — that one piece that would be proudly displayed outside the Gateway Center for the common plebian to gaze at in admiration. Modern-minimalist artist Tony Smith was commissioned by then-board-chairman Donald Burnham to create a work that would reflect the company’s “cultured” side.Smith’s sculpture was to be the cherry atop the proverbial art sundae. Smith was already a well-respected and highly desired artist at the time of this commissioning, and when he came to Burnham with a paper model in hand, he was given the go-ahead for this work.

Inspired by a yellow truck rumbling through the grey landscape of Downtown, Smith designed the 11-ton steel sculpture to have his usual angular, geometric form, but instead of his usual black color choice, he made this sculpture bright yellow.

The piece was assembled on-site in the spring of 1974 with the use of a crane, and the legacy of “Light Up” was born. However, its presence outside the Gateway Center was short-lived.

According to a 1989 article in the Pittsburgh Post-Gazette, the statue was taken down — never to be reinstalled — as plans were made to renovate the Downtown plaza.

Rumor has it that the reason it was never reinstalled is that Burnham didn’t like the way it looked and renovation was the perfect excuse to shelve the sculpture.

After languishing in the storage closet for some time, the work was eventually brought to its current location through the efforts of Pitt architect Ana Guzman. In 1989, Guzman was able to convince Westinghouse to donate the sculpture to the University. “The space [Forbes Quadrangle] needed some color,” she told the Post-Gazette. A special base was made to level the work’s arch with the overhang connecting Posvar and David Lawrence halls, a fresh coat of yellow paint was slapped on the sculpture and “Light Up” once more saw the light of day.

The piece still remains an important icon of Tony Smith’s minimalist works, and in 1998, Pitt loaned the work to the Museum of Modern of Art in New York City for a retrospective exhibition. The sculpture spent a few months in New York’s Seagram Building Plaza before returning home to Pitt, where it has remained ever since.

Yet amid this recognition, the work remains without any kind of identifying plaque. This is a common issue in the examination of local monuments and sculptures: Many of these once-well-known and admired works go relatively unknown and uncared for in the modern era. As relics of past public art projects, they dot our everyday landscape, icons of historical pasts waiting for their stories to be unearthed.

So next time you walk by “Light Up,” see it for what it really is: a masterwork of modern art, newly rediscovered.