The Pitt News • May 19, 2015 • https://pittnews.com/article/855/sports/pitt-ends-down-season-on-high-note-with-series-win-against-virginia-tech/ 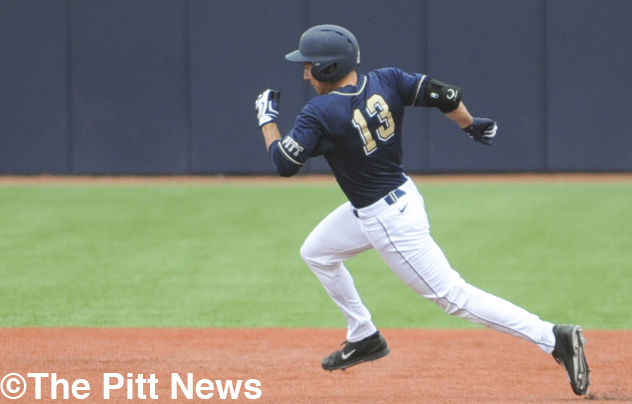 Sitting at 18-31, all Pitt baseball had to play for was pride.

Out of contention for the ACC tournament with a 9-20 conference record, the Panthers played well against a team fighting for their own tourney spot. Pitt defeated the Hokies, taking two of three over the weekend at Cost Field in the final series of the season.

Pitt’s Thursday starter, junior Aaron Sandefur, had struggled lately with a 8.55 ERA in his past five starts, including a three-inning stint in his last start against No. 16 Miami, in which he gave up five runs total.

But length was needed from Sandefur after a win against West Virginia Tuesday, as relievers pitched the entire game.

Virginia Tech’s starter and staff ace, senior Sean Keselica, was on the mound opposite Sandefur, but had struggled against Pitt in his career. He gave up six earned runs, 10 total, in four and two-thirds innings in his other career start against Pitt in 2014.

Pitt took the lead in the bottom of the first on a sacrifice fly by junior catcher Alex Kowalczyk to give the Panthers a 1-0 advantage. The sacrifice fly scored leadoff man and sophomore outfielder Jacob Wright, who worked a walk to start the inning for Pitt.

The leadoff man getting on base would become a trend. Keselica walked the first man in four of the six innings he started in a night filled with control issues. The Hokie lefty walked six total, while also hitting a batter, and heaved a wild pitch that scored Wright in the fifth inning, making it 2-0.

Though he was hitless, Wright would have a very productive 0-1 night, walking a career-high four times, scoring three runs, and even taking one of his walks with the bases loaded for an RBI.

“Their pitchers threw me a lot of breaking balls today, and it’s always my approach to see a lot of pitches as a lead off guy,” Wright said.

Wright has been productive out of the leadoff spot this year, getting on base in 39 straight games to end the season, while leading the team with 33 walks.

On his success in setting the table, Wright said his goal was simple.

“Just try any way to get on base,” the sophomore said.

While Pitt would score seven runs total, one would be all Sandefur ended up needing. He went five and one-third innings, allowing only four base runners total to the get the win.

“I was sticking with what I know, attacking the hitters, throwing a lot of strikes, trusting my defense behind me,” Sandefur said.

Sam Mersing, normally a starter, entered in relief of Sandefur during the top of the sixth after a leadoff double by Virginia Tech. Mersing stranded the runner and kept Virginia Tech off the board for two and two-thirds hitless innings.

With five and one-third scoreless innings under Sandefur’s belt, he qualified for the win, his first since February, which left him feeling elated.

“It’s awesome,” Sandefur said. “We’ve had some troubles, so bouncing back with a win late in the season is big for the team, especially going into next year.”

The Panthers chased Keselica from the game after two more runs in the bottom of the sixth, both scored with two outs, on RBI singles by sophomore shortstop Charles LeBlanc and senior outfielder Boo Vazquez, playing in his last series with the team.

Pitt won by a final of 7-0 Thursday night. After its previous weekend series against Georgia Tech, head coach Joe Jordano had only positive remarks.

“Today, we had good starting pitching, we were never really threatened and we played clean baseball,” Jordano said. “We had a bunch of two out RBIs, and beat a real good team.”

The statement would describe the Friday night game just as well.

Meanwhile, the Panther’s offense went to work from the start, scoring four runs in the first, three on a bases-clearing triple by junior third baseman Ron Sherman, forcing the Hokies to pull Scheetz after one inning.

Virginia Tech would once again be shutout as Pitt won the game by an identical score of 7-0.

It was the first time Pitt had pitched back-to-back shutouts since 2011.

Virginia Tech wrangled the last game of the series away from Pitt on Saturday by a score of 13-7. The win earned them a spot in a play-in game against University of North Carolina-Chapel Hill in the ACC Tournament.

Pitt held the lead until the top of the eighth, when at a 7-6 score, Virginia Tech scored seven runs, capped off by a grand slam by junior catcher Andrew Mogg.

Overall though, Jordano saw a lot of positives over the final series for Pitt.

“There is no secret to the formula. We’ve just been challenged this year with depth issues, injuries and the draft,” Jordano said. “There are so many factors that went into this season, but we will continue to work hard.”