This Charming Charlie and the power of fair use 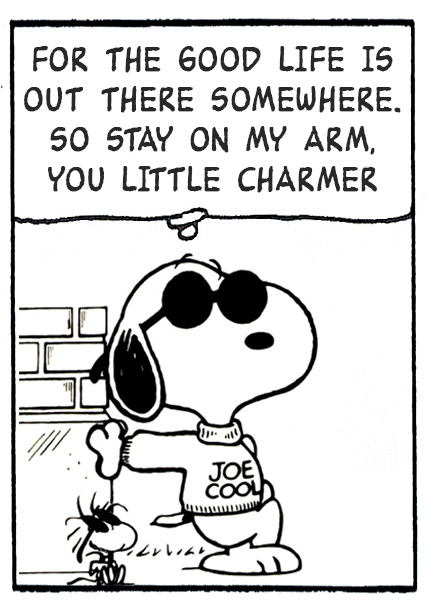 It seems that for fans of This Charming Charlie — the popular Tumblr page that has been creating pitch-perfect mashups of lyrics by The Smiths and cartoon panels pulled from Peanuts comics — the joke is still funny.

After exploding in popularity following its debut last August, the Tumblr page — created by Oakland, Calif., graphic designer Lauren LoPrete — came under heavy fire from Universal Music Publishing Group, the media giant that owns the rights to The Smiths’ music. According to a report from The A.V. Club, Tumblr was receiving removal requests from UMPG “almost hourly,” causing the blogging site to remove several of the beautiful posts and making LoPrete strongly consider deleting the page altogether.

Such an act of abandonment would have no doubt resulted in the page’s countless lonely fans muttering “maybe in the next world” before turning up The Queen is Dead to a volume just loud enough to deafen their ears and drown out the sobs, but never dull the sorrow.

Luckily for these morose Morrissey lovers, “the good of life is out there somewhere,” no doubt located in a little-known exception in U.S. copyright law called “fair use.” According to The Los Angeles Times, LoPrete’s lawyer Dan Booth has argued that her work fits perfectly into the definition of fair use, as “she posts only snippets of lyrics, puts them in a whole new context and doesn’t make any money off them or damage the market for the songs.” After LoPrete and Booth filed counter notices with Tumblr pleading this case, Tumblr stopped removing posts and UMPG suddenly ceased pursuing the case, allowing avid readers of the Tumblr to rejoice and say “I just might die with a smile on my face after all.”

UMPG’s motives in coming after This Charming Charlie are unclear, as was their decision to apparently drop the complaints the minute LoPrete lawyered up. However, its aggressive actions against a webpage that at worst is harmless and at best revives interest in one of the great bands of the ’80s might reflect the anxiety of a large company for whom the 21st century is no longer breathing down its neck but staring it in the face. In an era in which anyone who is Photoshop savvy can grab a syndicated cartoon from one place and start jotting in their favorite lyrics, the lines dividing whose content belongs to whom begin to blur.

Naturally, music companies — many of whom were badly burned by the rise of Internet piracy and continue to feel the effects to this day — feel nervous in such a brave new world. The fact that they would file so many complaints against the page within such a short period of time exemplifies their newfound vigilance against any and all perceived violations of their ownership rights. In many ways, the move by UMPG bears a resemblance to a preemptive strike, and had it worked, it likely would have been one. How many part-time bloggers are interested in incurring the wrath of a music label’s legal team in response to their innocuous cartoon creations?

The current era of user-accessible digital content has blurred the lines between creators and consumers in exciting new ways. This Charming Charlie is a wonderful and hilarious example of this new shift, but the fears of major companies such as UMPG are largely overblown. These companies should bear in mind that creating cartoons with the lyrics of a beloved band for no money poses no real threat to their profit margins. Instead, they’d do well to follow Morrissey’s route and embrace the homage.