The Pitt News • May 19, 2015 • https://pittnews.com/article/872/arts-and-entertainment/painting-pittsburgh-one-neighborhood-at-a-time/

Painting Pittsburgh, one neighborhood at a time 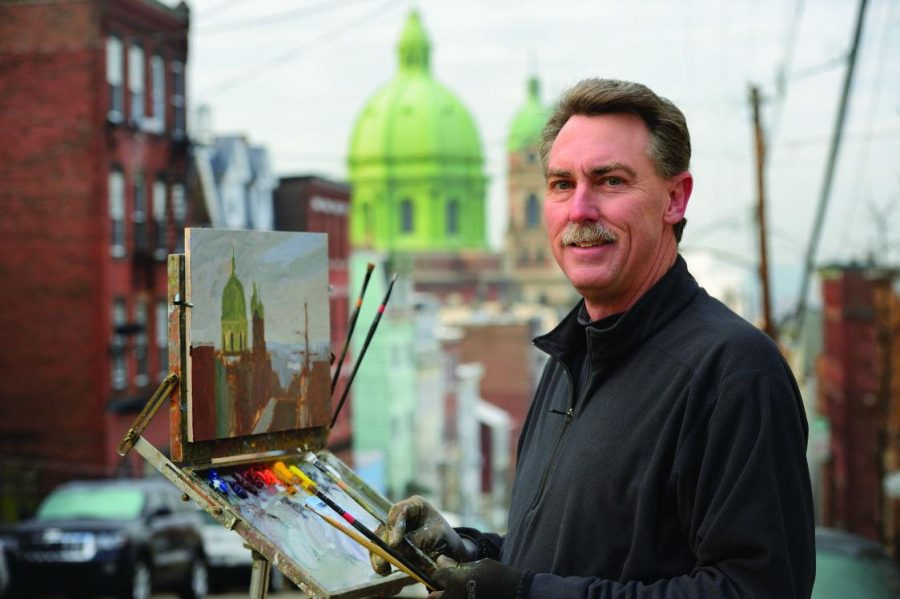 Local artist Ron Donoughe captured his love for Pittsburgh through his paintings.

For a few years, the Lawrenceville-based artist has been painting Pittsburgh, one neighborhood at a time, alphabetically, from Allegheny Center to Windgap. Hundreds of people showed up at the opening of his exhibit, called “90 Pittsburgh Neighborhoods,” at the Pittsburgh Center for the Arts on May 15. Donoghue’s collection of vibrant and realistic paintings is on display until Aug. 9. Visitors can purchase a 100-page hardback collection of all of the paintings at the gallery, or they can order a print of the painting of their favorite Pittsburgh neighborhood.

Donoghue is a self-described en plein air artist, which means his paintings are inspired by the life around him. He even taught painting classes in France — many of his former students who studied his style of painting abroad came to support him at the gallery opening.

“Something happens when an artist is confronted directly with the subject. It probably has something to do with the spirit of a place,” Donoghue wrote on his website. “I believe that spirit can makes its way into the artist and the work.”

While painting in Pittsburgh’s neighborhoods, he collected stories and blurbs from residents who came out to watch him capture the essence of their corner of Pittsburgh.

“I engaged people and asked what they thought might be interesting to paint. It was a way to learn about the place I call home,” Donoughe said. “I’ve had the opportunity to discover a lot of the nooks and crannies [of the city].”

Donoghue said the city is worth investigating because Pittsburgh “is blessed with some really interesting neighborhoods.”

Many people don’t even know Pittsburgh has 90 neighborhoods, he said.

All of the attendees at the gallery’s opening night, many of which were painters themselves,had positive things to say about the exhibition.

Ebe Emmons, of Point Breeze, had taken painting classes with Donoughe in France and enjoyed seeing the vibrancy of the paintings in person.

“The paintings really pop when you see them in real life, as compared to online. The colors looked 100 times more intense,” Emmons said.

Each of Pittsburgh’s 90 neighborhoods are represented at the gallery, including all of the Oakland neighborhoods.

“He has an eye for composition in a small space, and he accents the characteristics of these neighborhoods. In one of the paintings you can see the roof of my house,” Wleklinski said.

“He has a feel for the subject matter. He knows Pittsburgh, and what better way to present this intimate knowledge,” Cook said.

Donoughe said he chose to paint Pittsburgh because of the turbulent geography, which provided him with many opportunities to discover something new about the city.

“The many bumps and lumps allow for unexpected vistas, allowing the artist to paint scenes with extreme perspectives. I chose Pittsburgh because I didn’t know it as well as I thought I did,” Donoughe said. “It is fun to discover so many new places, especially in a city I thought I already knew.”

He added that the neighborhood that surprised him the most was Spring Hill.

“[The] city view is amazing. Everyone in Pittsburgh should see the city from St. John’s Lutheran Cemetery on Buente Street,” Donoughe said.

Many of the event’s attendees agreed that Donoughe had captured a beautiful city, even if it doesn’t fit with Pittsburgh’s previous reputation.

Doreen Currie, of Latrobe, challenged people who claim that Pittsburgh is still the smog-filled, ugly city that it was during its industrial years.

“All those who say Pittsburgh isn’t attractive should see these,” Currie said.