Clever use of makeup can make Halloween scary again 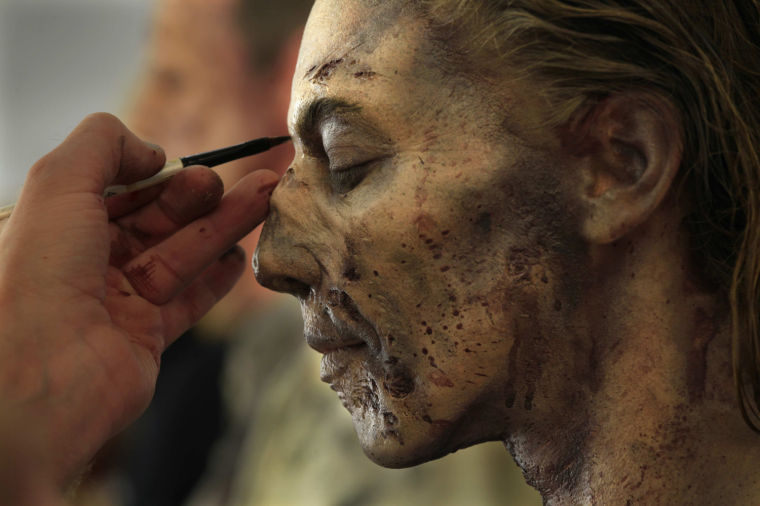 By Jack Trainor / For The Pitt News

What’s wrong with being scary these days?

It seems that once you hit college, Halloween becomes less about being scary and more about irony or playful jest.

Even with the rise of Halloween attractions such as Pittsburgh’s Scarehouse and Hundred Acres Manor, scary costumes seem to be an afterthought for college students. Perhaps we’ve forgotten since our trick-or-treating days how to even be scary on Halloween.

Halloween, at its core, is all about being scary. Scare venues don’t dress their actors up in red, plastic Mario jumpsuits or black cat-ears headbands for a reason.

Thanks to Dillman, Hundred Acres Manor (not to be confused with the Hundred-Acre Wood) features six frightening make-up and costume-oriented attractions.

As a professional, convincingly turning “a high school cheerleader into an undead, flesh-eating creature from your worst nightmare is not easy,” says Dillman, “but application is key.”

Dillman uses special makeup, brushes and sponges on the actors’ faces to transform them into the nightmares found inside the manor. This is a common effect used by many makeup artists involved in Halloween-themed attractions.

Another venue that uses these methods is Pittsburgh’s famous Scarehouse. There, critically acclaimed makeup artists Nick and Brian Wolfe of Evil Twin FX, their own special-effects company, conduct workshops on increasing the fright. They focus on how to properly use sponges when applying makeup, which involves a lot of tedious dabbing movements on the face in order to be as precise as possible. They also gave a brief overview of the anatomy of the skull, which is useful knowledge when attempting to create a bony zombie face.

This all sounds like it can be very technical and time-consuming, but actually “there is a lot you can do in 20 minutes” when it comes to makeup, insists Dillman. Focusing on flesh tones, specifically reds and purples, is an effective and easy way to transform your greasy pimples into scary flesh wounds.

Red eyeliner is another commonly underestimated tool available to the common person and used by professionals such as Dillman. Red eyeliner “will instantly make you look sick and diseased,” he says.

Another makeup myth is that “you need to be willing to spend hundreds of dollars to create a proper makeup look for Halloween,” Dillman explains, “which is certainly not the case.” With a mere $20 budget, you won’t have to rely on cop-outs like “black cat” or “’80s guy” for your costume.

For $20 or less, you can get two quality eye shadow colors (remember to stick with those organic tones), some red eyeliner, a bottle of fake blood and a tiny bottle of liquid latex in any color you can find. All of these items are not only cheap, but also can potentially be found at the closest convenience store, which requires much less effort than taking a bus over to a South Side costume shop.

Now be sure to use these materials wisely. Just because you have them does not mean you are automatically scary. “Don’t just slap some blood on yourself,” advises Dillman. “Use fake blood as an added detail, not a cover up.”

Some other things to avoid are prosthetic pieces made for generic face shapes. Not only are these unoriginal and difficult to work with, Dillman says, but also a lot of first-timers just end up throwing them away.

If Thursday comes around and you still haven’t gotten a costume, don’t spend your money on black spandex, itchy Afros or plastic Kanye West glasses. Looking scary isn’t only cheap and easy — it’s what Halloween’s all about.

Write to Jack at [email protected]