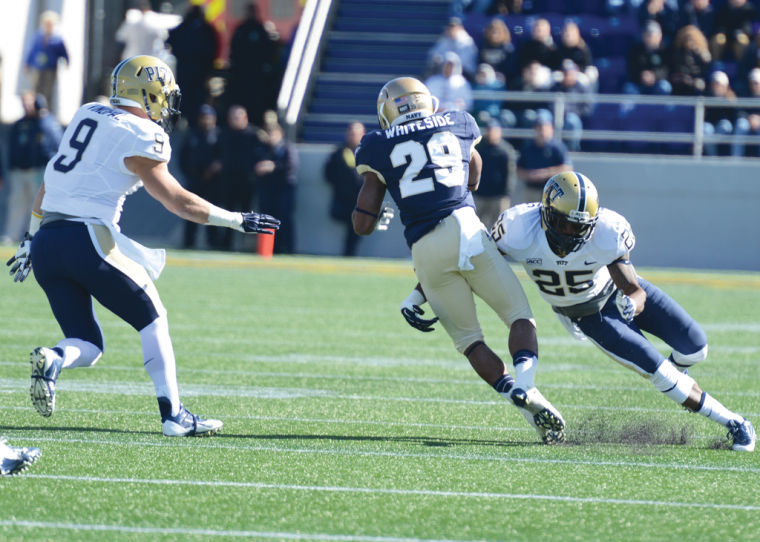 Pitt began another week of preparation Monday before the Panthers head to Atlanta, Ga., this weekend for an ACC bout against the Georgia Tech Yellow Jackets. Head coach Paul Chryst’s team enters the week off a 24-21 loss to Navy that Chryst said was obviously “disappointing.”

“After watching the tape, I believe our guys played hard and put it out there,” Chryst said. “But we certainly didn’t do enough to win the game.”

Pitt (4-3, 2-2 ACC) held Navy’s patented triple-option offense in check for most of Saturday’s game, but the Midshipmen scored 10 unanswered points in the final six minutes to notch a comeback victory.

Pitt led Navy 13-7 at halftime, and Chryst acknowledged Saturday the defense may have been fatigued in the fourth quarter. Chryst said he didn’t “sense” the defensive unit was overconfident entering the second half.

But if the Panthers were overconfident, Chryst placed the blame on his shoulders.

This week, Pitt’s matchup with Georgia Tech (5-3, 4-2 ACC) pits two Coastal Division foes against one another in the Yellow Jackets’ Homecoming game. Like Navy, Georgia Tech also runs out of a triple-option base offense.

Complacency against the Yellow Jackets will get the Panthers nowhere further than it did against the Midshipmen, as Georgia Tech’s offensive execution likely poses a much stiffer test for the Pitt defense than Navy’s offense did.

Georgia Tech brings the nation’s fourth-ranked rushing offense to the table — the Yellow Jackets rack up an average of more than 315 yards per game. The running game has propelled Georgia Tech’s offense to a scoring average of 35.9 points per game, which ranks No. 35 in the country.

“There’s no doubt they’re explosive, fast on offense and play really fast on defense,” Chryst said. “It will be a good challenge for us.”

Four Yellow Jackets have already recorded 350 rushing yards or more this season, and the team is led by David Sims. Sims has rushed a team-high 96 times for 516 yards and eight touchdowns.

Behind Sims is Robert Godhigh, who leads all ACC players with 10.7 yards gained per play. Godhigh has carried 36 times in 2013 for 384 yards and one touchdown.

Like Navy, Georgia Tech also has a quarterback who threatens from both land and air in Vad Lee. Navy signal-caller Keenan Reynolds didn’t gash Pitt’s defense as he did others, but he did play a role in two of Navy’s three touchdowns Saturday.

“He’s similar [to Reynolds] in a sense that you truly have to account for him, and he can hurt you,” Chryst said. “A couple of games I’ve seen of him, and he’s made a couple of very good throws, but he’s a good player.”

Lee, himself, has run for 350 yards and scored six touchdowns on the ground. Through the air, Lee has tossed for another eight touchdowns, completing 47 of 104 attempts this season for 921 total yards.

In addition to an explosive offense, Georgia Tech also ranks No. 21 among all Division I teams in scoring defense at 19.9 points allowed per game. The Yellow Jackets have pitched a pair of shutouts this season and allowed more than 20 points to their opposition just twice this season.

“Up front, they’re active and they play fast,” Chryst said. “They’ll hit you and their secondary plays with confidence. Part of that is because they have some guys up front that can put some heat on you fast.”

Senior defensive back Jemea Thomas is one of those players in the secondary. Thomas earned Second Team All-ACC honors last season. He leads the Yellow Jackets with 44 tackles and has broken up a team-high seven pass attempts this season.

Beyond Thomas, a trio of Yellow Jackets have each picked off two passes to constitute most of the team’s nine total interceptions this year. Up front, Jeremiah Attaochu leads the team with four sacks, followed by Adam Gotsis’ three.

Pressure up front has been an issue for the Pitt offense, which has struggled in recent weeks following its 58-point outburst against Duke. Pitt allowed just one sack at Navy, but it was one that crippled the Panthers’ chances of driving for the go-ahead touchdown late Saturday.

“The one sack we gave up, we ended up being in the wrong protection,” Chryst said. “They were on him a little sooner than anticipated.”

While Pitt quarterback Tom Savage was sacked just once, he faced a good deal of pressure, which forced him to seven rushing attempts after dropping back to pass. Beyond the scrambles, though, Chryst thought he saw improvement from his quarterback a week after Savage passed for just 104 yards against Old Dominion.

“I think he got off some reads and progressed through them,” Chryst said. “I think he’s in a good state now. I’m not saying he’s perfect, but I think he’s good.”