The Pitt News • May 12, 2015 • https://pittnews.com/article/901/arts-and-entertainment/mixed-media-artists-rave-at-museums-cultural-extravaganza/ 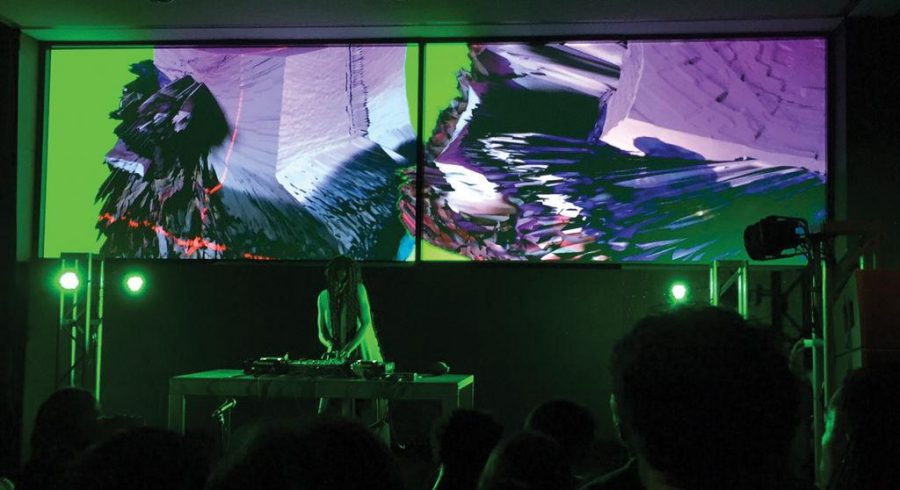 By Chris Estes / For The Pitt News

Guests of the #NOWSEETHIS party at the Carnegie Museum of Art this Saturday had an opportunity to check out local fifth graders’ art projects before breaking it down on a sweaty, chaotic dance floor.

The Carnegie Museum of Art, in partnership with VIA — a Pittsburgh group dedicated to showcasing local and international artists — presented a wild blend of art and music from 7 to 11 p.m. at the museum.

Men in heels, middle-aged folk in business casual attire and younger people sporting leather, platform shoes and mesh shirts joined in the rare coupling of musicians in risqué fashion and elementary school artwork. The event kept its finger on the moment, yet pushed artistic boundaries.

In a technicolor cocktail of music, new media art and technology, the party gave a new definition to the phrase mixed media and reimagined modern art for a digital stage.

Along with the professional artists’ exhibits, attendees could also examine paintings and sculptures created by 10-year-olds. One such piece included a pair of contorted legs wearing paint-splattered denim and Nikes, contrasting against the dark, stark and sometimes pornographic works of digital artists like Kevin Ramser. The Video and Media Design Program from Carnegie Mellon’s School of Drama also joined the party, with interactive and experimental video displays.

The eclectic mix of attendees and art alone made this night edgier than other Pittsburgh cultural events that focus on traditional, conventional definitions of art — but what really exaggerated the party was the musical accompaniment.

Sporting blue lipstick that matched her blue Beats by Dre headphones, Huxtable played an hour-long eclectic mix of songs ranging from “2 On” by Tinashe to “Lionsong” by Bjork. Her setlist sampled everything from reggaeton to Madonna. She upped the energy and reimagined the feelings each song could evoke. She transformed “Frozen” by Madonna, for instance, from a melancholy, ethereal track into a thumping dance anthem.

Never making eye contact with the crowd,Huxtable kept her persona docile and mysterious, dipping into coquettish. The ferocity of her setlist, however, transformed the inquisitive museum patrons into frantic, moving bodies on the dance floor. With braids brushing her knees and her beige, full-length sheer dress, Huxtable’s performance was one of the most rewarding parts of the CMOA event.

Prior to Huxtable’s set, photographers Rollin and Tad Leonard encouraged audience participation for their art demonstration. They invited partners to sit facing each other to be photographed, and then the artists digitally manipulated the participants’ faces on a computer.

They merged the two faces, smashing them together and displaying them on a large screen.  The magic of the exhibit came from the diversity of the subjects: gay, straight, black, white, young and old were all welcome to sit together on the stools and share an imagined, digital kiss.

Dinner performed his set after Huxtable close to 10 p.m.In a simple black button-down, he commanded the audience with his bellowing voice, at one point getting the entire crowd to sit on the floor while he serenaded them. The music was somewhat reminiscent of the ‘80s new wave genre, almost a contemporary parody of bands like Flock of Seagulls and New Order. Heavy male vocals accompanied generally upbeat, synthesized pop beats to achieve a decidedly nostalgic sound.

Close to 11 p.m., the event’s headliner, the alternative R&B performer, Kelela, took to the stage and opened with her song “Bank Head.” In an oversized, plunging black blazer, subtle gold jewelry and black lipstick, Kelela all but mesmerized the audience. Her voice, similar to Janet Jackson a la “That’s the Way Love Goes,” echoed in soulful, futuristic R&B ballads. Her DJ joined her on the stage, sporting slicked-back blonde hair and a black t-shirt. He bore semblance to a young, hipster Alan Cummings.

Ewenlina Aleksandrowicz and Andrzeji Wojitas of the 3D print art duo Pussykrew accented Kelela’s performance with their futuristic, surreal digital artwork. As Kelela performed tracks from her EP, “Cut 4 Me,” Pussykrew’s artwork — gold faces covered in black magma that turned before a stormy gray sky — played on two large screens behind the singer.

The #NOWSEETHIS party was a vibrant, loud whirlwind of upbeat music coupled with thought-provoking artwork entertaining a crowd ages 20 to 50. Psychedelic lights and chest-crunching bass culminated in a wild dance party, the effects commanding the attendees’ attention.