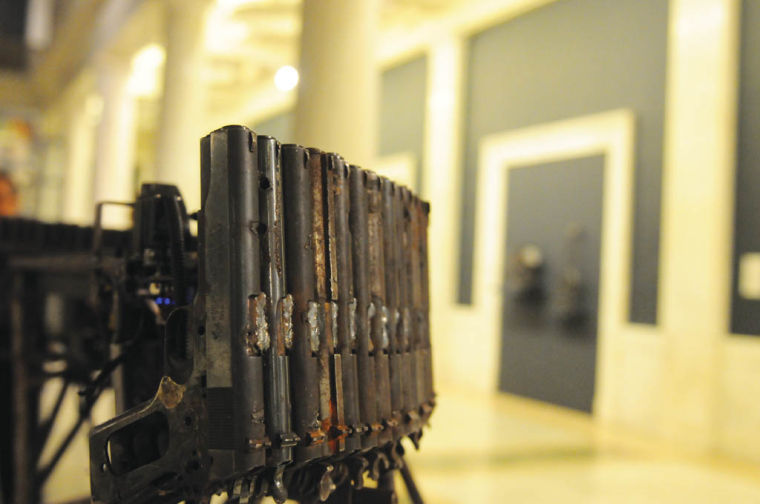 The Carnegie International has finally arrived after three years of planning and extensive and varied installations. The pieces, representing the efforts of 35 artists from 19 different nations, are displayed in myriad ways throughout the Carnegie Museum of Art — each room entirely different from the one before it.

Although the effort invested in organizing the Carnegie International is worthy of applause, the exhibition in its entirety gives off a sense of stale, stagnant contemporary art that seems to lack any cohesiveness or ingenuity.

I’m not saying the art itself is stale or bland, but the selection and arrangement is disjointed, random and lacks a real emphasis. Every work is a critique of society in one form or another, states a political or social message or tries to “involve” the viewer. These are hardly new themes, and these themes mostly trace roots back to post-modernistic tradition — a sort of iconoclastic, politically charged and collaborative-based art heritage.

The exhibition’s artwork has this common heritage, but none of the works directly relate to each other, and the hectic juxtapositions between them and the permanent exhibition lack a strong uniting theme besides the fact that they are contemporary and international.

The idea of play is a key component of the exhibition, and although there are some cohesive hints of this idea with the outdoor playground, playground exhibit and puppet theater, it still feels like a feeble attempt to make art “accessible” or “understandable.”

Yet there is a disturbing contrast between the works of “The Playground Project” exhibit and the works in the nearby Hall of Sculpture. The Hall of Sculpture houses Pedro Reyes’s instruments constructed out of recycled guns from Juarez, Mexico, a city notorious for its violent crime,, steamy pulp-fiction novels and paintings by Nicole Eisenman that are saturated with themes of our lavish, hedonistic culture.

This atmosphere seems an odd place to end up after being in an exhibition focused on children and creating diverse and tolerant areas of play. This is hardly “understandable art” for the intended child audience that is close at hand.

Although the exhibition has some serious flaws, there are some redemptive qualities. For example, outside the actual museum, Phyllida Barlow’s “TIP” has a dynamic energy that the rest of the exhibition lacks. The colorful, chaotic structure that appears to grow out of the glass facade of the museum’s front draws the viewer into the throes of the museum. There is a dynamic relationship between “TIP” and Richard Serra’s preexisting giant steel work — titled “Carnegie” — that is also situated just outside the museum’s front doors: The colorful timbers  of “TIP” wrap around a solid, angular structure in a manner that borders on organic. There is also a dynamic, noncombative and (hitting upon the Carnegie’s interest in play) playful sense of awe created by this work. As Curator of Education Marilyn Russell noted, “Phyllida Barlow transforms the entrance of the museum, creating a work that, like breadcrumbs, leads the viewer into the museum.”

It seems to me that the works that deal with these subtle — or even grand (in the case of Phyllida Barlow) — spatial interventions, while perplexing, may create the best realization of the curator’s themes of beauty, imperfection and confusion. They develop a more complete relationship to the viewer because the viewers can actively engage with the work in the space. Although this is a positive thing, there is still a tendency for the museum-goer to question, “Well these purple walls are cool, but … what does it mean!?”

Indeed, as Museum Director Lynn Zelevansky explained to me, the idea behind the physical layout of the exhibition was based on the supposition that “people understand things chronologically, I think.”

“So with the way we arranged the work chronologically, I think there is a better chance of the work being understood … People need a lot of help understanding contemporary art,” Zelevansky said.

Zelevansky’s last sentence says a lot. The selection is varied and international — a veritable global-art goldmine glittering incandescently in the trained eye of the curator, art historian or artist. But to the common folks, Sierra’s painted walls are just purple walls, and the whimsical landscape maps of Joseph Yoakum — with their strange proportions and shifting, snaking dimensions — are essentially big doodles.

That being said, the Carnegie International is not a bad art exhibition. It shows a variety of artwork from a diverse array of artists. But it is no different from any other exhibition out there: It has stale motifs, a surplus of post-modernist messages and giant gaps between art and observer.

Perhaps the best example was a moment I witnessed when walking up the stairs to the Carnegie Museum of Art’s Scaife Galleries, where a bulk of the 2013 Carnegie International exhibit is located. I came upon a trolley laden with folded chairs stacked in all manners — a sort of twisted mass of metal — with a bright purple crate on top, like a cherry on an ice cream sundae. Members of the press and museum visitors gathered around the structure, which was located across from a film piece by Mark Leckey that celebrates the relationship between artist and art.

What could this piece mean? I heard frantic whispers from well-dressed couples discussing the hidden gestures inherent in this work, this existential, spatially disrupting piece that challenged notions of material, space and color. “Oh, how grand contemporary art is,” they exclaimed, “and we, humble plebeians, can actually understand it.”

Then, curator Dan Byers walked up with a look of surprise on his bearded face, whipped out his cell phone and called maintenance to remove not an art piece, but the misplaced conglomeration of chairs and crates meant for the storage closet, not the gallery. The small crowd dispersed, quickly forgetting this unintentional, unnamed work, and went on to discuss and analyze the real art.

To me, this was the most interesting interaction that the museum offered. Perhaps the janitor who left the trolley and chairs should be heralded. He or she managed to create a work that perplexed not only the viewers, but the curator, as well.