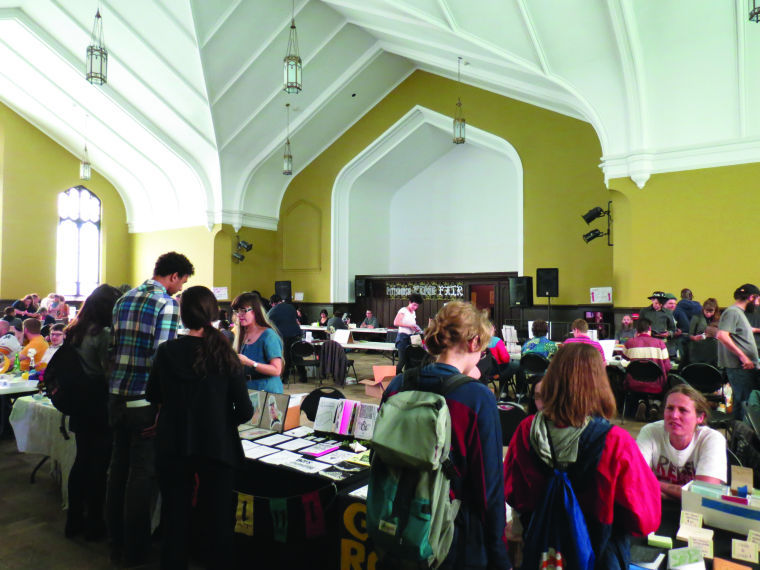 By Dylan Abbott / For The Pitt News

Pittsburgh is infested with “zinesters” — it’s an epidemic beyond imaginable proportions. There is a vast community of writers, comic artists, poets, designers and illustrators within the city, all of whom are self-publishing their creative conceptions and cutting out (and possibly pasting) the corporate middle-man to personally supply the public with their printed and stapled brain children. Zines are generally small-scale, self-published and self-produced print works that include a mix of anything from art to social commentary to an appealing blend of the two. And their propagators have laid down roots in the city. On Sunday, this proliferation was on display at the Pittsburgh Zine Fair. Held at Union Project in Highland Park, the fair brought together some of most exciting local and national zine producers. Founded in 2011 by a group of Pittsburgh’s artists and cartoonists who saw a need for a platform they and their creative peers could use to showcase their work, the event has evolved into a haven for the city’s artistic and literary talents, while simultaneously providing the local community a chance to interact with this reinvigorated art scene.

Maggie Negrete, creator of the zine “Adventuring Princesses” and co-organizer of the Pittsburgh Zine Fair, outlined the recent proliferation of zine production within Pittsburgh, saying “the zine is the easiest format to make what you want to make and start putting it in people’s hands.”

Within the spacious Union Project’s main hall, backlit by stain-glass-tinged sunlight, the event was awash with communal spirit. Artists and writers were indistinguishable from the crowds of curious attendees as they similarly circulated the room, taking note of what their counterparts had produced. Nate McDonough, comic artist and resident of Pittsburgh, explained that not only is it a great event for like-minded artists and writers to form collaborations and to strengthen the creative network within the city, but it also provides ample opportunity to “find new people who don’t know about this kind of stuff.” Nate continues to endorse the zine culture by expressing that it is a “humble” medium, due to its do-it-yourself qualities, and wholly inclusive for both creators and consumers.

Another explanation for the zine’s recent surge in popularity is the freedom this medium provides. The array of genres and styles and means of communication exhibited at the fair is staggering, varying from vampire erotica novels to feminist linoleum prints to irreverent comics concerning a young daughter distressed by her father’s use of the word “swag.” There actually is something for everybody. Laura Warman’s zine, titled “Warman Writes About Sex,” a personal and candid exploration into the subject of fornication, exemplifies the malleability of the medium. But her transition from blogger to “zinester” wasn’t necessarily due to a lack of constraints. Instead, it was catalyzed by a desire for more direct contact with her readership: “I used to blog a lot of my work, but it always seemed kind of depressing to hit submit and have it floating around on the Internet. … It’s much more tactile and it feels more real,” Warman said.

Andy Scott, advertising director for the Pittsburgh Zine Fair and founder of Little Tired Press, echoed similar sentiments, explaining, “zines and independent literature is a great way to publish as you’re working … to show your development [and] get immediate feedback.” As a co-founder of the fair, Andy also asserted the importance of the community’s involvement with a venture such as this, and that involvement has thus far been achieved through partnerships with “organizations with the same ethos” such as the Carnegie Library and The Mr. Roboto Project, a DIY venue and show space in Pittsburgh.

The Pittsburgh Zine Fair was evidently much more than just a contact zone for the public and the city’s up-and-coming artists and writers, who are often left to dwell unappreciated and undiscovered until fortune shines kindly on them. In fact, although still in its infancy, The Pittsburgh Zine Fair is at the heart of an imperative, community-based creative culture — championing the “zine” as the ideal medium for immediate connection and self-expression.