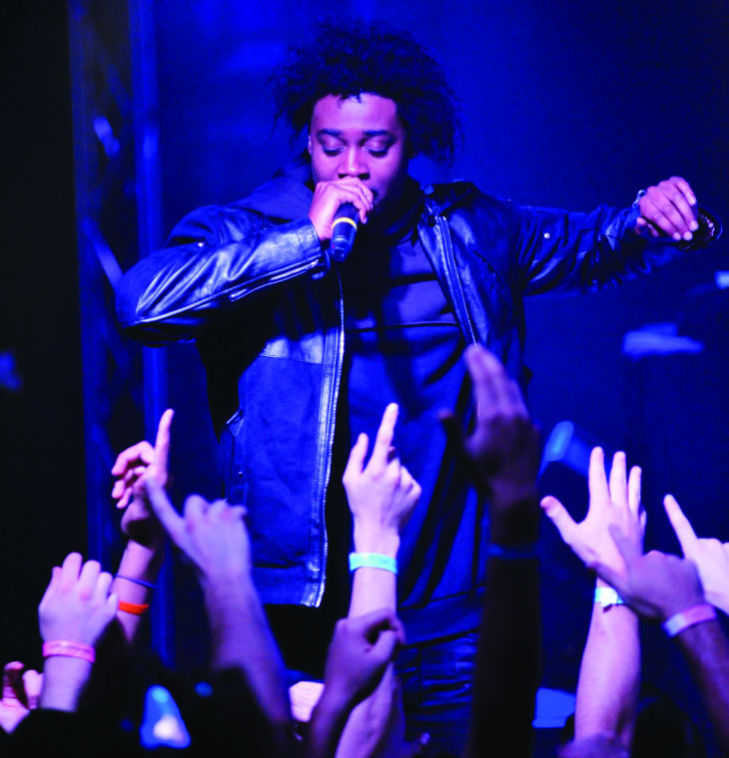 The line to get inside the Altar Bar stretched a block down Penn Avenue before turning a sharp corner and continuing down 16th Street as hundreds of fans stood outside the venue in anticipation of the “2 High 2 Die” tour headlined by Action Bronson and Detroit native Danny Brown.

Among those waiting in line to enter the show were Pitt junior Jesse Hellman and Point Park junior Alex Miller. Like many others in line without tickets, the pair was nervous about gaining entry. “If we don’t get in tonight we’re driving to Philly tomorrow to catch the show there,” Hellman said. “I have to see Action [Bronson]. I have to.”

The two were in luck, however, as they managed to get in to see opening act Trash Talk calmly walk onto the stage before releasing a deafening fusion of electric guitar riffs, drum palpitations and nearly incomprehensible vocal screams. The responses of the crowd to the metal sound were mixed, ranging from mirthful laughs to wide-eyed looks of confusion and hands pressed tightly over ears.

Following more than a dozen stage dives, a snapped microphone cord and numerous chants of “Bronson! Bronson!” Trash Talk gave way to the famous red beard and unexceptional dress of Action Bronson, who opened his set with “NaNa,” a collaborative track with Chance the Rapper, before diving into “Alligator,” a song off his recently released Saaab Stories EP. Bronson then doused himself in water and made his way through the crowd before making the most of the Altar Bar’s unique architecture by standing on the signature central staircase while performing the guitar-heavy feature, “The Symbol.” The Queens-based 29-year-old continued to make his way around the venue while performing more tracks from his mix-tapes Rare Chandeliers and Blue Chips. After returning to the stage, Bronson thanked the crowd with a raw “I love you motherf*ckers,” before telling his DJ, “Now put my motherf*cking rap song on,” and ending his set with “Triple Backflip.”

Danny Brown came on about 15 minutes later, laughing with the crowd and slapping hands raised toward the stage. Brown’s energetic stage presence immediately provided a counterpoint to Bronson’s more relaxed and lyrical performance. Dressed in leather and black from head to toe, Brown greeted the Pittsburgh crowd: “Hi, my name is Dan and I’m the black Brad Pitt. Let’s go!” Brown danced around the stage and flailed in all directions while backing up his claim to be “the black Brad Pitt.” Brown continued his sample-heavy set with his verse from Childish Gambino’s “Toxic,” which heavily samples Britney Spears’ original hit. He also performed tracks from his newest album, Old, which was released on Monday.

As a whole, the show offered performances from three distinctly different artists, with the Altar Bar and the personalities of the musicians producing a performance that felt personal.