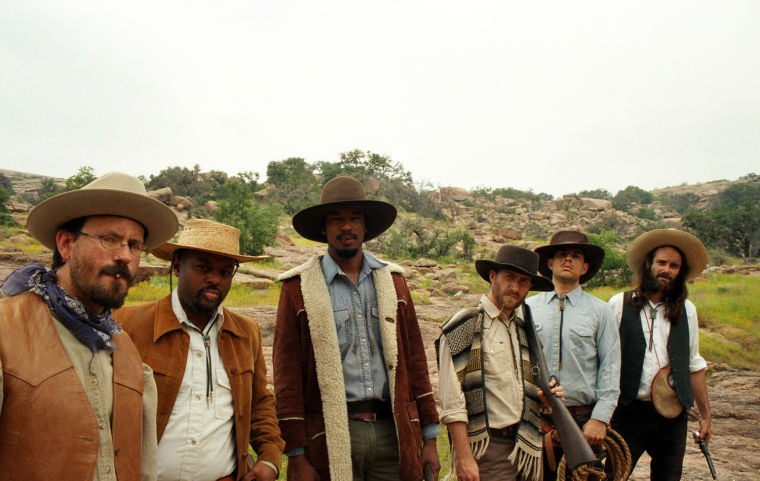 Sounds Like: Chuck Berry and James Brown had a son, and he was a badass

Though there’s plenty to say about Black Joe Lewis — from his ingenious use of a horn section to his gruff, fiery vocals and his James Brown-like ability to inject his tracks with spontaneity and emotion, his new album can be summed up in nine words: Electric Slave is a great rock ‘n’ roll album.

Now, the explanation. Since its rise from the elements of blues, jazz and country, rock ‘n’ roll has become a term so ubiquitous that it is now meaningless. It seems that in order to explain what a rock band sounds like, it’s necessary to place them into a sub-sub-genre (proto-post-rock, coined by an avid music lover I know, probably best exemplifies modern music’s genre problem) that encapsulates every influence the band has encountered along the way.

Not so with Electric Slave. This is an album that, from its first track, comes out with middle fingers bared and overpowering guitar riffs blazing. It’s a volatile album that goes back to rock ‘n’ roll basics, combining elements of blues, bits of funk, a skilled horn section and Lewis’ palpable emotion on every track.

What makes it a flat-out rock ‘n’ roll album, though, is its frankness. Though it comes steeped in blues progressions and has the driving pace of Chuck Berry, the album isn’t derivative. It’s too heavy. There’s too much grit to it, too much of Lewis’ fire and too much of that sweet, sweet horn section. If Chuck Berry played a Black Joe Lewis song, it would sound like a cover. This is purely, fiercely a Black Joe Lewis album.

Stylistically, it’s hard to put a time stamp on Lewis’ music. Since breaking out with his band, Black Joe Lewis and the Honeybears, Lewis has demonstrated his ability to change up his structure from one track to the next without so much as a hitch. Some songs might fit into a funk show, while others would work nicely at a country dance hall. This magnificent skill is best highlighted on the album’s two standout tracks, “Come to My Party” and “Vampire,” which appear back to back.

“Come to My Party,” which is the album’s sole made-for-radio selection, has grooving bass lines, saccharine guitar play and dramatic horn breaks that make it a funk-filled dance track that hearkens back to some of the songs off his debut album, Tell ‘Em What Your Name Is! It’s easy to picture this song being listed up on a Stax Records “best of” compilation or crammed into a ’70s B-movie montage as everyone gets ready to hit the town. More than anything, it showcases Black Joe Lewis’ ability to use his sandpaper-covered vocals and skills as a musician when writing some infectiously catchy tunes.

Immediately after “Come to My Party” cuts out, Lewis jumps straight into “Vampire” — a thumping, guitar-driven Texas rock ‘n’ roll piece pulled, still dripping, out of the Red River. It’s the kind of song that Stevie Ray Vaughan would have liked to hear. It’s also a lesson in how to throw tight songwriting to the wind without losing control of the track itself. The track moves along at a languorous, bluesy pace for about three minutes before Lewis, howling all the way, lets his band take the reins and drive the piece into a flurry of notes that verges on chaos, but pulls back at just the right moment.

While these standouts will undoubtedly be staples of the Black Joe Lewis setlist for years, the rest of the album — especially the first five tracks — can sometimes blur together. The powerful guitar and rough coating of these tracks make them feel just slightly repetitive after a time. For fans of Lewis, part of the fun is that his music keeps listeners guessing what the next song is going to sound like. Black Joe Lewis is just as good when he’s throwing a party — like in 2011’s out-of-control jam “Booty City” — as when he’s an angry electric-blues man.

In spite of this bit of monotony, Electric Slave remains a great rock ‘n’ roll album, a designation that is shockingly rare in modern music.