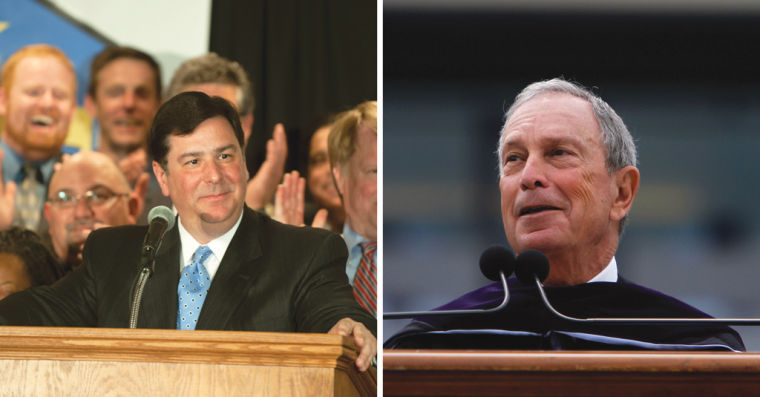 History always remembers its great leaders by their most daunting challenges: King David and Goliath, George Washington and the redcoats and most recently, Mayor Michael Bloomberg and the “Big Gulp” soda.

In November, two candidates will contend to replace Mayor Bloomberg, whose 12-year term will tower in the history of New York City as one of the most dynamic the metropolis has ever seen. Between extensive building projects for a rising population and a campaign to ban oversized soft drinks, he has attracted ample praise and criticism.

But as New York loses its veteran mayor, Pittsburgh will gain a fresh one in Bill Peduto. To improve the city, Peduto must learn from Bloomberg’s greatest successes — and greatest mistakes. Specifically, he should follow in Bloomberg’s steps toward sustainability with the construction of a better bicycle infrastructure. At the same time, however, he must be careful not to allow the types of uncontrollable construction that have led to the removal of so many low-income communities in Bloomberg’s New York.

At first glance, New York and Pittsburgh share very few commonalities. New York City’s gargantuan population of 8.3 million dwarfs Pittsburgh’s intimate 306,211. But beneath the drastically differing skylines, both share a similar story of deterioration and regeneration. Beginning in the 1970s, employers in both cities fled en masse, taking much of the population with them. Starting in the 1990s, however, both cities have rebounded by attracting investment and young professionals to drive a 21st-century service economy.

It is only fitting, then, that the only mayor New York City has elected in this millennium should become the poster child for this story of urban redevelopment, which is a familiar one to cities across the United States.

The mayor of Pittsburgh could begin by reading Bloomberg’s construction craze as a cautionary tale. Although the latter oversaw the construction of 40,000 new buildings in the city during his term, he also saw low-income communities squeezed out of their neighborhoods by the associated cost increases.

Nowhere was this more clear than in Williamsburg, a Brooklyn neighborhood once home to low-income families and artists that was transformed into upscale housing and waterfront space after extensive rezoning. This gentrification forced residents — many of whom had economic and familial roots in the area — out of Williamsburg and its surrounding neighborhoods.

Rezoning and construction to attract higher spending and higher-income residents became the hallmarks of the Bloomberg administration’s attitude toward housing. One can only hope that it will not be so for our next mayor of Pittsburgh.

This is especially pressing for the Steel City, considering the parallel trends in housing price and potentially demographic movement. The economic surge that has swept up the region in the past few years has carried with it increasing rent prices and property values — especially over the past two years — as more educated, skilled residents receive fatter paychecks from successful firms.

The loss of Pittsburgh’s characteristically low cost of living threatens much of what makes the city appealing. Affordable rents enable the city to not only attract sizable artistic and student populations but also enable those residents to live side-by-side with low-income families, in neighborhoods such as Lawrenceville and East Liberty.

A higher cost of living means a less attractive city to these valuable populations, and less livable neighborhoods for working families.

Peduto, unlike Bloomberg, must realize the economic possibilities available to a city that actively maintains low-cost housing. Rather than rezoning low-income housing and offering unsuccessful incentives for developers to maintain affordable units — which Bloomberg unsuccessfully implemented — the mayor must actively pursue more units zoned for low-rent properties. Relying on the market to maintain the cost of living that made Pittsburgh an economically viable location proves simply unsustainable.

For sustainable ways to attract and maintain investment and interest, however, Peduto would be wise to take a page from Bloomberg’s book.

Bloomberg’s extensive bike-lane construction and creative bike-sharing programs both garnered wide acclaim and present a sustainable solution, in every sense of the word.

Despite vocal opposition, Bloomberg managed to increase bicycle use among New Yorkers by 225 percent by expanding the bicycle infrastructure to a record-breaking 500 miles.

If Peduto wants to maintain the educated, dynamic population within the Pittsburgh city limits — rather than losing them to the surrounding Allegheny County suburbs — bike lanes present themselves as affordable and safe alternatives to a car-dependent suburban lifestyle.

Not only could this help relieve the city of its many public-transportation and parking woes, but it also happens to be pretty good for the environment.

Clearly, the problems — and solutions — that present themselves to New York City are common to countless American cities, and Pittsburgh is no exception.

We can only hope, however, that the future mayor of Pittsburgh won’t count 24-ounce pop containers among those problems.