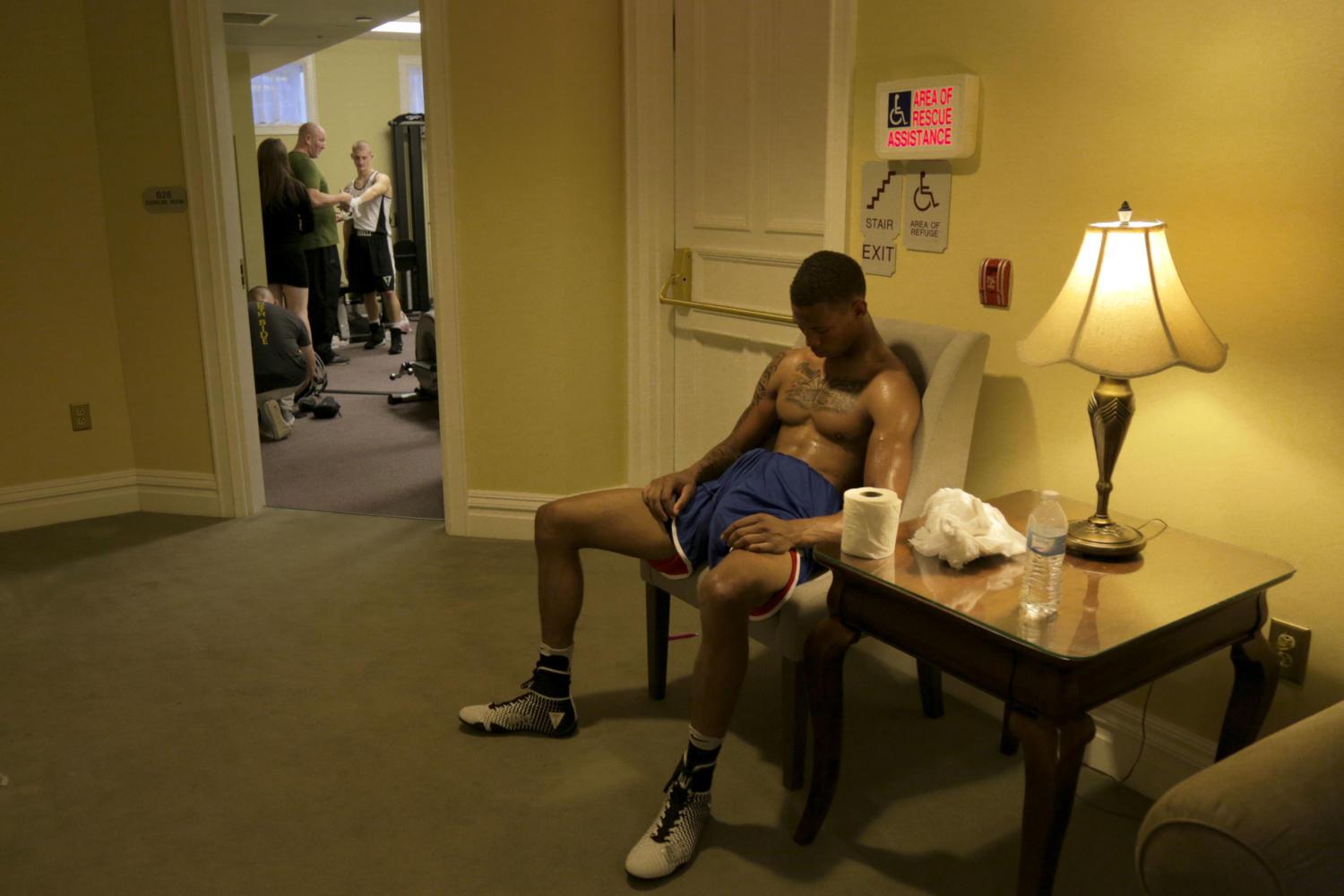 Gary Jackson, from Baldwin, recovers in the makeshift locker rooms in the basement of Priory Hall after losing his amateur boxing match. (Photo by Theodore Schwarz | Staff Photographer)

Gary Jackson, from Baldwin, recovers in the makeshift locker rooms in the basement of Priory Hall after losing his amateur boxing match. (Photo by Theodore Schwarz | Staff Photographer)

A night at The Priory

The ballroom of the Priory Grand Hall, a small hotel in the historic Pittsburgh neighborhood of Deutschtown, is actually a converted church — but last Friday it became a boxing ring.

A red-matted ring bordered by red and blue ropes sat in the center of the ballroom, hit directly by the fading evening light coming from the glass roof.

The crowd of about 500 slowly filled the seats around the ring, drinks in hand, waiting in anticipation of a four-match fight card promoted by Conn-Greb Boxing Club. The crowd was full of people connected to either the fighters or the Pittsburgh fight scene in general. A table filled with T-shirts promoting the fighters and Conn-Greb sat near the entrance to the ballroom.

Near what used to be an altar for mass was a DJ playing everything from AC/DC’s “Thunderstruck” to N.W.A.’s “Express Yourself.”

A week before the fight, “Express Yourself” blared from the speaker connected to Mike McSorley’s phone at Conn-Greb. The gym is full of workout benches, weights and punching bags, and the walls are covered with fight posters and photos. A practice ring sits in the center of the gym. It’s tucked away on the second level of a parking garage in North Oakland, making it almost impossible to find unless you know McSorley, the owner.

“We are very underground by design,” McSorley said in a text, explaining where the gym is.

McSorley has been training fighters out of Conn-Greb — named after the two famous Pittsburgh boxers Billy Conn and Harry Greb — for the last six years.

Greb, nicknamed “The Pittsburgh Windmill,” fought in the 1910s and ’20s. He was a famously difficult matchup because of his nonstop motion in the ring, and competed in nearly 300 fights in his career. He was voted the greatest middleweight of all time in 2006 by the International Boxing Research Organization.

Conn, nicknamed “The Pittsburgh Kid,” fought throughout the ’30s and ’40s. Conn famously fought Hall of Famer Joe Louis twice, including a 13-round bout in 1941 which Conn appeared to be winning before Louis won by knockout — a fight that ESPN named one of “Joe Louis’ Greatest Matches.” Old fight posters and photos featuring Conn adorn the walls of the boxing club, many of which McSorley said were donations from Conn’s son.

But McSorley only recently started promoting his own fights, and the contest at the Priory was still among his first. It was originally supposed to be headlined by two fighters he’s been training for the last two years — Lyubomyr Pinchuk and Oleg Dovhun, both from Ukraine.

Pinchuk is a domineering figure, standing well over six feet — his nickname is “Demolition Man” — but at just 21 he still looks youthful, and surprisingly untethered for a fighter. McSorley first found him on Facebook and reached out to him to train him.

“Mike found me on Facebook and we start talking … he text me, I text him, and he asked me about a couple fights, if I can send him,” Pinchuk said. “I sent him some of my fights, he liked it, he asked me if I can come and now I’m already here and we work together.”

“In Ukraine I have big amateur experience. I have like over 250 fights,” Pinchuk said, pointing to his temple. “Maybe too much, too many hits in my head.”

He recalled one amateur fight that he was particularly proud of.

“I remember one fight where I had three cuts. One on my head, one by my eye and one on my nose,” Pinchuk said. “But, I still won the fight!”

Pinchuk said that training in America has been different from his experience in Ukraine. American fighting, he said, is less strategic.

“In Ukraine we work a little bit more for technique, for strategy. Right here it’s like more slower,” Pinchuk said. “First it was a little bit difficult for me, changing my style, but now I start to do the same job with Mike, I start to work for power. I have all that they teach me in Ukraine and now here they teach me something new.”

McSorley describes Pinchuk as a “devastating puncher” and said it’s been hard to find fights for him because of his experience and reputation. Pinchuk wasn’t even able to secure a sparring partner for his match at the Priory.

But Dovhun was. He sparred at Conn-Greb eight days before the scheduled fight and ended up getting a cut across the width of his nose. McSorley, who worked as a cutman for professional fighter Sammy Vasquez, immediately called a local doctor he knew. He and Dovhun left quietly and quickly. Too serious a cut could mean Dovhun misses the fight — and McSorley loses his headliner.

While McSorley was out, two other fighters stepped into the ring to spar.

Leemont Johnson, 27, a super middleweight living in the West End of Pittsburgh, holds a perfect 5-0 record with three knockouts. He was the biggest of all of the fighters at Conn-Greb the week before the fight. He has an immediately noticeable reach, making him a dangerous opponent for any fighter that tries to step inside. His sparring partner at Conn-Greb was Jarrell Brackett — the only openly gay boxer in America — who was preparing to make his professional debut at the Priory.

Brackett, 30, wore his hair in a curled mohawk dyed purple on top. He goes by the moniker “The Samurai” and bowed toward Johnson from his corner before the sparring began.

The two sparred for six rounds, which got progressively more contentious, at one point spilling over the ropes of the practice ring before onlookers helped the fighters back to their feet and into the ring. Brackett filmed the entirety of their sparring session on his laptop, warning people not to step in front of it.

“If you step in front of my camera I will stop whatever I’m doing until you move,” Brackett said. He has a YouTube channel full of videos of both his amateur fights and sparring sessions. The description of the channel says the videos are to “have a video recording of this journey.”

Brackett has been fighting since he was 12 years old and said his inspiration for becoming a fighter came from a desire to be like the superheros he saw on television.

After 57 amateur fights and a college boxing career at Olivet College in Michigan, where he was team captain and helped secure the 2016 United States Intercollegiate Boxing Association National Title, Brackett was ready for his professional debut.

“This was the part I wanted to do ever since I was young. I always wanted to look at another person in the face and be able to put myself against them,” Brackett said.

Dovhun’s injuries were more severe than McSorley originally thought. He was out for the Friday night fight, so McSorley placed a call to Derek Gionta, Johnson’s manager, about another fighter from Cleveland he manages named Latiss Norman.

Norman, 26, had just one career fight — a loss — before he got the call to replace Dovhun while training in Cleveland. He recently turned pro after taking a two-year hiatus from boxing because of his frustration at being stuck in the amateur circuit. He jumped at the chance despite having just six days to prepare.

His opponent, Joshua Kuhn, had four career fights before facing Norman. Theirs was the first bout of the night, a four-round fight that ended in a TKO after Norman landed a pointed left hook to Kuhn’s ribcage.

“Like my uncle told me — ’cause my uncle boxed — he said, ‘Wait for a body shot, let it happen, let it happen natural,’ and that’s what I did tonight,” Norman said after the fight.

Norman said his first professional win taught him how important it is to be ready for any opportunity as an up-and-coming fighter.

“Just always stay ready. Always just stay ready. Regardless if somebody tells you there’s a fight tomorrow, stay ready for the next fight, even if it’s a month from now,” Norman said.

Gionta’s other fighter, Johnson, was the star of the second fight of the night. During his walkout he was announced as “Braddock’s favorite son, Lethal Leemont Johnson.”

He fought Jeremy Lane, 37, in a brutal back-and-forth contest. Both fighters were knocked down over the first three rounds. Johnson said after the fight that the gritty nature of the fight wasn’t conducive to his style.

“I like the clean fight, where I’m landing more punches. I kind of came in not feeling so good. That’s why I wasn’t able to move as much as I wanted to. But definitely wasn’t a fight that fits my style. I’m more of a boxer, mover, boxer, puncher,” Johnson said. “So, it kind of took on a gritty type of atmosphere, but it’s OK because it’s pro fighting. I like a little more of a fight.”

Johnson, who compares himself to current World Boxing Council heavyweight champion Deontay Wilder, ended the fight in the fourth round of six with a brutally swift left-hand counter punch. It was the kind of knockout punch where the audience knew Lane was done before he even hit the mat.

“[I’m] definitely a knockout artist, you know what I mean?” Johnson said after the fight. The knockout was Johnson’s fourth in his six pro fights — all of which he’s won. “I got the length, the Deontay Wilder length — the type of build. And I’m expecting another knockout in my next fight.”

The next knockout of the evening came much quicker when Brackett made his professional debut against Brock Willis from West Virginia.

Brackett came out to the song “Loose Wrists” by Cazwell, an openly gay rapper from Massachusetts. From the outset of the match, his brother could be heard across the crowd cheering him on.

But the excitement wouldn’t last long, as Brackett’s debut ended almost as quickly as it started with a first-round knockout. Just as Brackett was beginning to establish his jab, Willis caught him on a quick counter punch to the chin that put Brackett down for the count.

Pinchuk closed the night with a similarly swift first-round knockout of his own. His match with Matthew Garretson, a fighter from West Virginia who significantly outweighed Pinchuk, only lasted one minute and 45 seconds. Pinchuk knocked Garretson down twice in under two minutes — the second time, Garretson didn’t get up.

In the dressing room Pinchuk was calm after his knockout. After over 250 fights he finds it hard to get too excited about any single one, saying, “[It’s] just one more fight, doesn’t make any difference.” He’s looking ahead to a more challenging next fight in a few months at the same venue.

“I hope in the next fight I can have something better, you know, more challenge,” Pinchuk said. “Next fight on August 18 we can show more better show.”

Brackett was in the dressing room as well — he sat in the corner with his brother standing over him. He took off his gloves and methodically unwrapped his hands.

“The disappointment is real,” Brackett said, then paused. “But I’ll be back.”