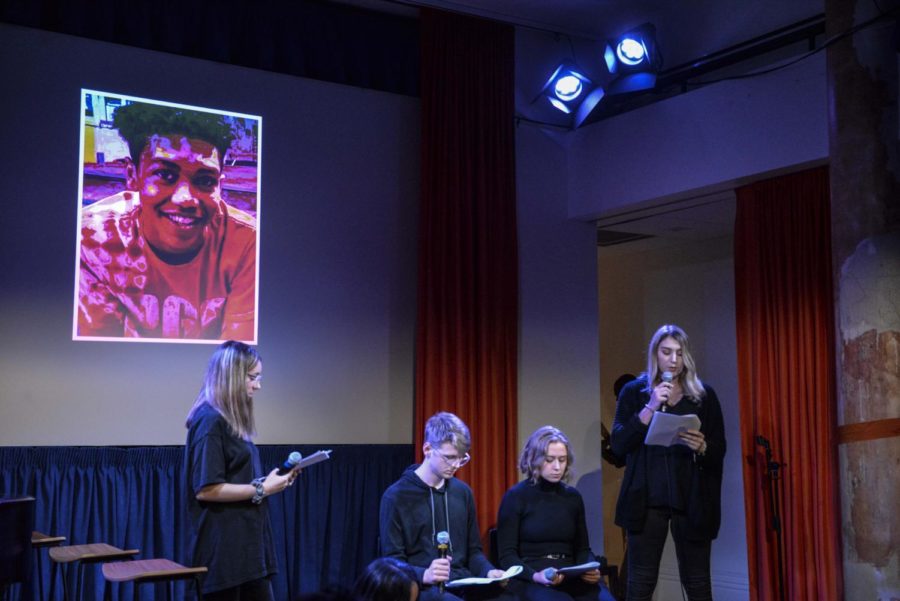 Students perform a collaborative poem about the shooting of Antwon Rose written by inside students.

Editor’s note: The last names of both inside and outside students in this piece have been withheld at the request of the instructors to protect their anonymity, as one of the program’s rules prevents contact with students after the class is over.

It seemed almost like a debate between the Pitt students — they talked back and forth, shouting opinions about Antwon Rose’s shooting in 2018. But the words that came out of their mouths weren’t their own. Instead, they were the words from pieces of creative writing by incarcerated students in class with them.

The performative sparring was part of an event called Clear & Present Stranger: Words from Incarcerated Writers, which packed City of Asylum on Wednesday night, with more than 100 people in attendance. At the event, Pitt students performed the poetry of incarcerated students as part of the Pitt Prison Education Project.

The Pitt project is part of a nationwide effort called the Inside-Out Prison Exchange Program, which provides education to incarcerated persons and seeks to generate dialogue between people from vastly different social backgrounds.

Tonight’s event was the culmination of the semester, where outside students worked with inside students to make their words heard to the general public. The poems focused on a wide range of topics, including their children, racial issues and how the inside students ended up in prison.

Allison is one of the senior outside students in Puri’s class who performed on Wednesday.

She said all students had been working on the performance for the whole semester, but that it really came together in the week leading up to Thanksgiving break. In preparation for the event, outside students worked heavily with inside students, making sure they understood the emotions they needed to express at different parts of the poem — repeating a line with a whisper, raising their voice to accentuate the emotion of a particular passage.

But yesterday’s event was just one part of the semester-long class. In the rest of it, both groups of students developed their creative writing skills through workshops designed to get them thinking about social justice issues.

This year’s class is the third year Pitt has offered classes at prisons. In the inaugural fall 2017 class, Pitt students went to the Fayette State Correctional Institution about an hour south of campus. They had a selection of two classes, Race and the Criminal Justice System or Imagining Social Justice.

Now, the program has expanded to three prisons — SCI Fayette, SCI Somerset and SCI Laurel Highlands — with three to four classes offered each semester. Not only that, but inside students can now get Pitt college credit for their classes, credit that can be transferred to other schools if and when they are released.

For outside students, the classes are always filled to capacity, according to Puri, who has taught Imagining Social Justice since the first semester it was offered. And at all of the prisons where classes are offered, there is a combined more than 250 person waitlist for incarcerated people to take part in the program.

Inside students have plenty of praise for the Pitt program. One student said in a review of the class that the 30 hours of class time did more for him for self-growth “than anything provided by the state in the other 203,592 hours that [he has] been imprisoned.” Another student said he “never got to do anything like this on the outside.”

“This program made me want to live again,” he wrote.

Their popularity stems from what Puri calls the students’ “hunger to learn.” But the two groups of students differ in their drive for the knowledge they gain through the class.

Not only that, but scholarly research on the educational programs in prisons shows highly promising outcomes for incarcerated people. In a 2013 review of educational programs, the RAND Corporation found that general education programs drastically reduced recidivism rates, or the rates at which those who are released from prison re-enter the prison system.

“My reflection scares me. I see my son through me. He says when he grows up he wants to be just like me. But I don’t want him to be anything like me. The best part of me is him. I wish my father would have told me this, too.” — ”A Father’s Love Changes the Past,” Jay

But inside the class, neither group of students sees a difference between them. Anaïs, a senior, said the class immerses them in a way that their incarceration status doesn’t matter.

“It really takes us outside of the context of prisons,” Anaïs said. “We’re not there to judge their experiences.”

Allison is in Puri’s Imagining Social Justice course, which partners with inside students at the all-male minimum-security SCI Laurel Highlands. The class started off by focusing on South Africa during apartheid, then transitioned into more modern social justice issues such as race relations and police brutality.

Through the class, the students primarily wrote poetry expressing how they felt about various social justice topics. And according to Allison, the experience of reading and sharing poetry humanized all of the students, making them understand each other better as people.

“The reason we use words like ‘inside student’ or ‘incarcerated student’ instead of prisoner or inmate is because it’s a condition,” she said. “Their identity is not prisoner — their identity is father, son, brother, friend, writer, artist.”

She said she learned about the prison system as a whole, too. When she took Crime and Punishment, an urban studies class at Pitt, she got an academic perspective on the experiences that incarcerated people have inside prisons. But this class has offered her an inside look at conditions inside prisons.

“I was aware of some of it, and had heard things, but it’s crazy to really see it happening before you,” she said. “There’s a difference between reading and talking about it in the classroom and sitting and talking to people who are affected by it every single day.”

As part of the rules of the Inside-Out program, outside students are not allowed to contact inside students after the class has ended. For Allison, next Monday — during finals week — is the last day that she will have contact with the inside students in her class.

“It’s hard, making these connections with people and not being able to see them and talk to them,” Allison said. “It is one of the hardest things, being like, ‘Man I’ve really made a connection with this person, and this is it.’”

And as the semester comes to a close, she remembers the lives and experiences of the inside students she met.

“They are interesting, passionate, emotional people,” she said. “I think it’s really, really important that every one of us remembers that every person on the inside is one of us.”