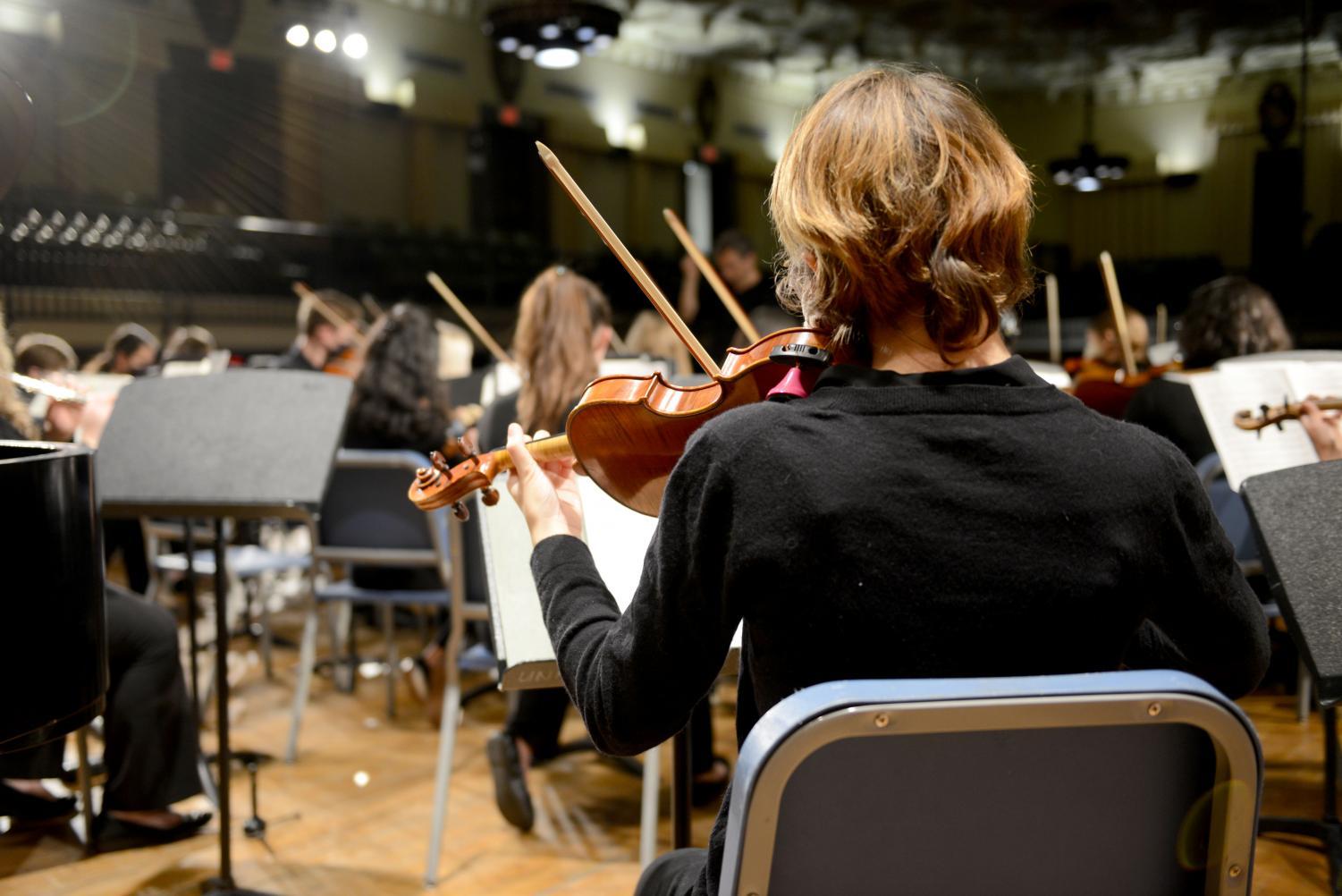 Siri Harish unzipped her coat and uncased her violin in the Bellefield Hall auditorium on Wednesday night.

Composed of mostly non-music majors and directed by senior lecturer Roger Zahab, the orchestra practices once a week. They also welcome staff, faculty and community members to join and Pitt students can take it as a one-credit course.

Playing music has been a way throughout Harish’s life to decompress and express herself — especially in high school.

“Definitely now, but more in high school, I’d play music whenever I was stressed and that usually helped me,” Harish said. “I think it’s cool to be able to express my emotions and the way I’m feeling things through music.”

Cullyn Murphy, music composition and theory doctoral student in the music department, was one of the conductors at last night’s performance. He conducted Johannes Brahms’ Serenade No. 2 in A major, op. 16 (movements I and II).

He said the orchestra didn’t play it safe, but that they performed “great.”

“The second movement [of the Brahms piece] is so rumpus and joyous but it has such a sensitivity and tenderness in its celebration in the same way to the warmth and the quiet excitement of the first movement,” Murphy said. “I think anything more metronomic and safe you have no chance at getting that – and I think there were lots and lots and lots of moments that we did get that tonight. That’s what felt really great.”

Maria Schrecengost, a sophomore neuroscience major who plays the violin, said she likes playing in the orchestra because “it’s a break for [her] in between classes.”

Schrecengost started playing violin in elementary school after someone at school introduced her to classical music. She, like Harish, also plays music as a way to destress.

Like Schrecengost, Harish also picked up violin in elementary school — after it was introduced to her through her school’s orchestra.

“I started playing in my elementary school orchestra and I realized I had kind of a knack for it so I picked up private lessons and I’ve just been going since then,” Harish said. “It’s a release to be able to play music and understand classical music too — it’s like stress relief.”

For musicians, the ability to communicate during performance is crucial. As someone with conducting experience, Murphy knows this better than most. He said he felt everyone was “very present” during Wednesday night’s performance — and that’s how he felt their communication.

“At least for me, it felt like we were all here – like we were all looking at the same middle together,” Murphy said. “It’s not even so much ‘Oh, I had an experience where everything was one to one – I did this gesture and they did this sound.’ It was more a thing of like ‘Oh I did this gesture, they didn’t do that sound,’ and then I did something else to be like ‘No wait, I need that sound,’ and then they responded.”

To Murphy, music is always a conversation, saying “that’s the only way this thing is going to be alive.”

Before walking on stage, Harish said she felt “pretty neutral” and added that the group was “playing a bit of everything.”

“I really like the Egmont overture — the Beethoven piece we’re playing,” Harish said. “It’s just fun. It gets really fast and I feel like all the parts are a little different. It’s really interesting to listen to — I should probably get on stage.”

Backstage after the performance, they all chatted about the music and ate candy from bags left for the musicians — Twix, Snickers, Ghirardelli and fists of other chocolates.

They all agreed — “yes!” — that they loved the performance.

Abby Langen, a sophomore architecture major, said Harish did “such an amazing job, of course.”

“Not biased but violin is my favorite instrument. I like the moodiness. I could never play the violin — I wish,” Langen said.

Amelia Barkman, a sophomore political science and communications major, said she liked “the long piece at the end” — Nepomuceno’s Brazilian Suite — the most.

“There were lots of different sounds and it featured lots of different instruments,” Barkman said. “At some parts, I heard a lot of the strings but then other parts I could pick out the clarinets and stuff. I liked that diversity.”

Collecting sheet music on stage after the performance, Murphy said he felt “thrilled.” During the concert, he felt he could fall on his face at any moment — and that was a great feeling.

“It’s really exciting, really thrilling and it feels like everyone could fall on their face at any moment,” Murphy said. “I feel like there’s a really safe way of playing it where no one falls on their face but, with that, there’s no feeling.”

In an auditorium of players packing up their instruments to go home and chatting with friends, Murphy reflected on their generosity.

“These are really generous players,” Murphy said. “I feel like I always get the chance to learn when I’m up with these people – and getting to learn by listening is one of my most favorite things to do. I’m feeling very fortunate.”