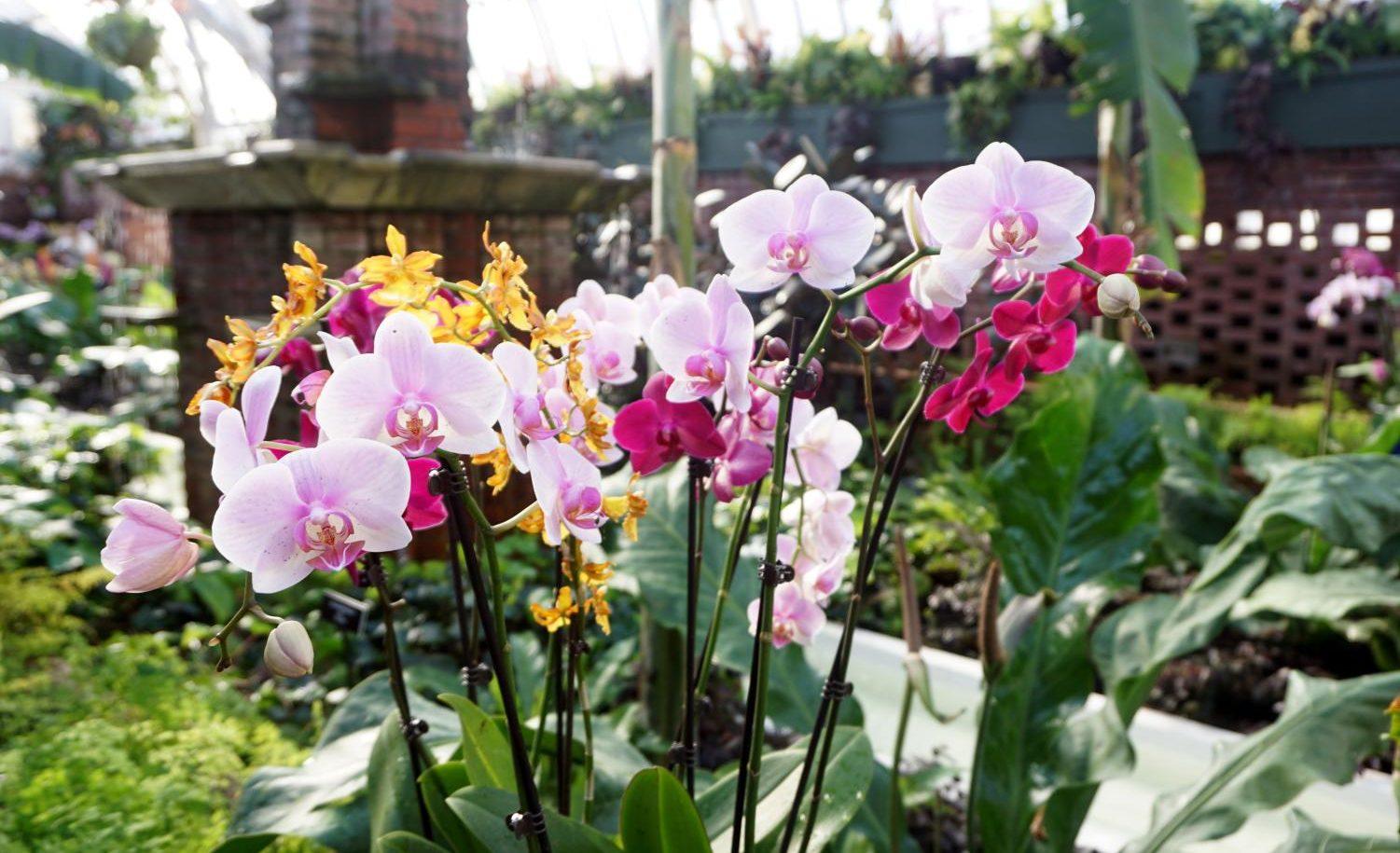 Orchids at Phipps Conservatory and Botanical Gardens on Friday.

Brightly colored orchids fill the Palm Court, surrounded by large leaves and blue and purple orchids varying in shape and size. A large yellow-striped orchid sits in the center of the room, drawing onlookers to observe its delicate leaves that curl within an ornate bronze vase.

The display is a part of the new “Orchid and Tropical Bonsai Show: An Ocean of Color” exhibit at Phipps Conservatory and Botanical Gardens, which will run through March 6. The exhibit features a variety of orchid displays as well as an intricate collection of tropical bonsais. It begins within the central Palm Court, and extends right into the Serpentine Room and left into the Sunken Garden.

Ben Dunigan, the conservatory’s collections manager, said the conservatory is particularly proud to showcase an award-winning pale yellow orchid that stands in the center of the Palm Court.

“One of our orchids which is our centerpiece right there is probably the crown jewel of the exhibit,” Dunigan said. “It was awarded a certificate of cultural excellence, it’s the highest award that the American Orchid Society can give. It’s the finest orchid of that species.”

The award-winning orchid, with its beautiful intricate stripes, is the first plant that individuals see when entering the exhibit. A wide assortment of other orchids adorn the space, showcasing large and small petals against dark leafy palms.

Dunigan said the exhibit hosts a variety of other special features as well such as bonsais, orchids and even live fish. He said the theme originated from an idea to create a warm space during the middle of winter.

“It was something we thought would be nice to do in the middle of winter,” Dunigan said. “We’re always trying to make it feel more tropical here after the holiday season. We’re trying to just bring people’s spirits up with more of a tropical vibe.”

“There’s such a heavy orchid following within the plant community at Phipps,” Krick said. “We always try to pick things that we know will not only attract people but really show the beauty and the technique of caring for orchids.”

According to Krick, it’s incredibly difficult to care for orchids as they bloom only a few times during the year.

“It’s kind of a high maintenance plant and they bloom only once a year really,” Krick said. “A lot of people have whole societies like the American Orchid Society that’s dedicated to caring for them. There’s an incredibly diverse variety of them, so understanding how each one of them works and grows is an incredibly difficult process.” 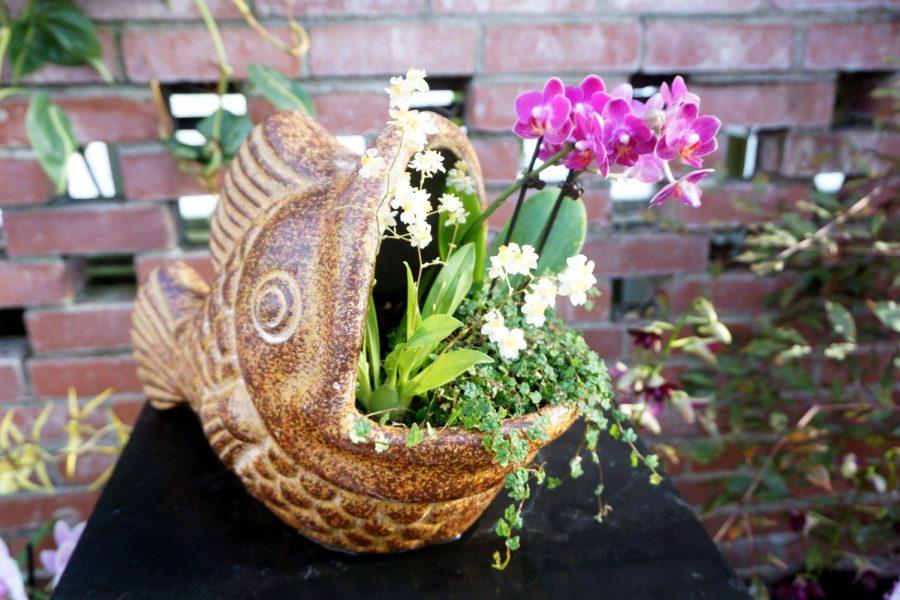 To enhance the tropical theme, the exhibit hosts live koi fish as well as delicate fish paper decorations that hang from the ceiling, spinning lightly from the breeze of the radiators. Krick said the live fish were a new feature for the Sunken Garden.

“This is the first time we’ve ever had live fish in this pond,” Krick said. “We have our own fish that we have and raise which are in the tropical forest and the Japanese garden.”

Visitors often travel from far distances to see the themed shows offered at Phipps. John and Cindy Jarzab make the roughly three-hour trek to see all of the Phipps shows. The couple enjoys the decorations put together for each one.

A graduate of Pitt’s Katz Graduate School of Business who now lives in Warren, Pennsylvania, John Jarzab said the conservatory has been a favorite part of Pittsburgh for his family.

“I came over here to study, sit, read here for a little bit,” John Jarzab said. “My daughter, she went to Pitt, she brings her kids down here now.”

Cindy Jarzab said she particularly loved the conservatory and its various features.

“This is such a treasure for Pittsburgh,” Cindy Jarzab said. “I think a lot of people don’t take advantage of it and they’re really missing out.”

Phipps Conservatory plans these shows one or two years in advance. Krick explained the process of putting each exhibit together, noting that decorations are usually bought from a third-party vendor through the conservatory’s props management team.

“That’s usually why our shows are planned a year or two in advance so they can find products that would fit in our show,” Krick said. “It can be quite chaotic but we are still open to the public the entire time.”

Krick said bonsai care is an intensely difficult process. She explained it usually takes around three people to replant the roots of a bonsai, and requires pruning the leaves two to three times a day. Some of the bonsais within the collection could be hundreds of years old, but the conservatory did not start documenting collections until the ‘90s.

“It’s an intensive process to get it to grow like this, sometimes we don’t even know the dates of every plant in this conservatory,” Krick said. “There are plants that could be 100 years old and we don’t know.”

Besides “An Ocean of Color,” the conservatory has a separate orchid room that is open year-round. According to Krick, the collection hosts one of the world’s largest lady slipper orchid collections. This orchid species is incredibly delicate, with some featuring a small petal pouch that resembles the shape of a lady’s soft ballet shoe.

“Lady orchids you can find in certain forests in Pennsylvania,” Krick said. “They have their pouch and these really twisty spindles. They’re a really beautiful and unique plant. And of course they’re named a lady slipper like a ballet slipper.”

Krick said Phipps was created to educate local communities about horticulture. She said that although this was the original intent, the conservatory is really a community, where horticulturists can practice their own kind of art.

“Horticulture is an art form, you know? This is an art,” Krick said. “There are people who are horticulturists, they are artists too. We are an art museum but with plants.”