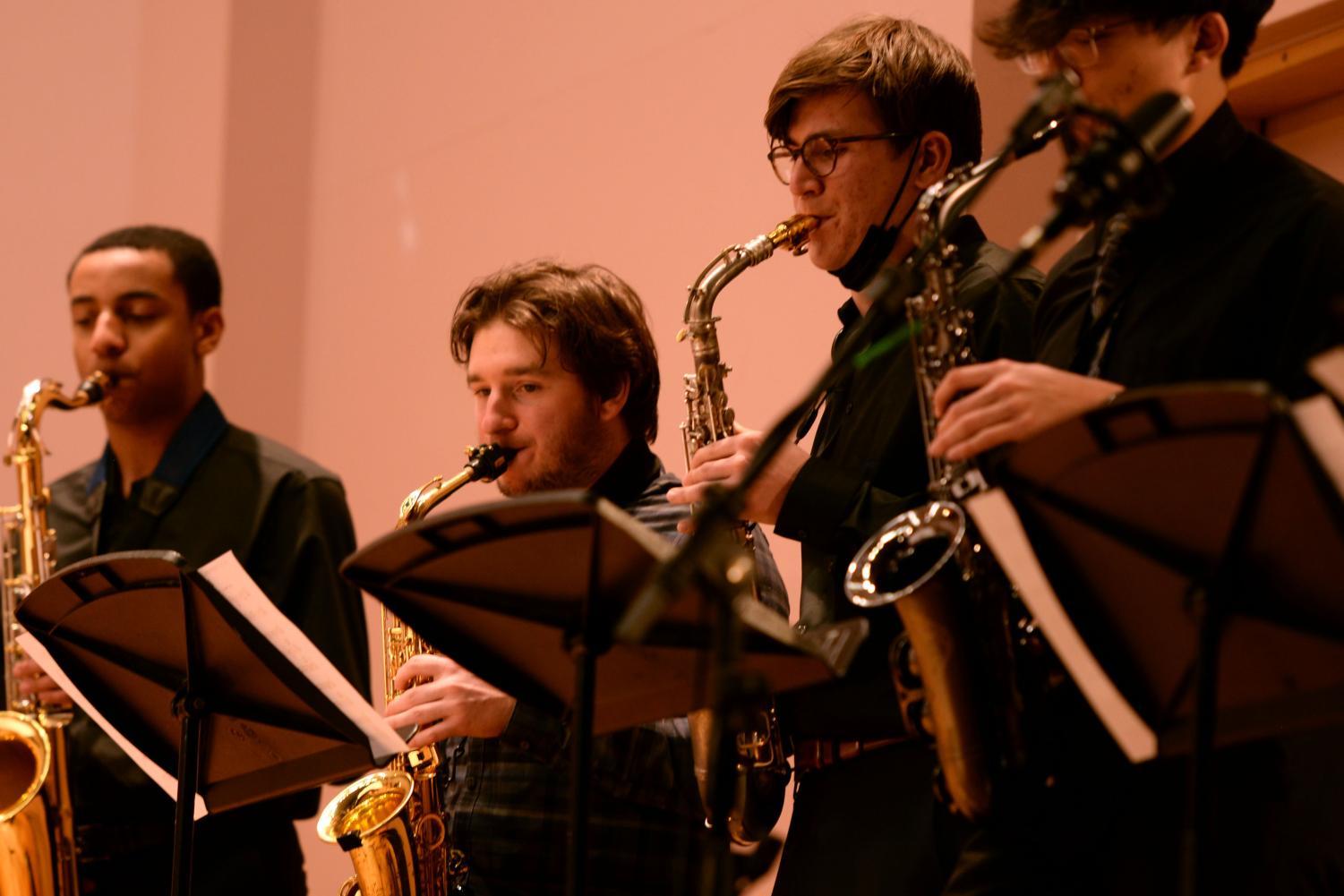 By Patrick Swain, For The Pitt News

After months of practice online, the Pitt Jazz Ensemble is kicking off Jazz Seminar week with its first performance of the semester.

The Jazz Seminar, an annual tradition now marking its 51st year on campus, consists of performances, lectures and discussions to celebrate jazz music. The student ensemble started off the week with a concert on Monday live-streamed on YouTube.

The ensemble is composed of Pitt students from a wide variety of academic backgrounds. Members dedicate their time and talent toward the ensemble to practice and perform jazz.

“We used to meet in the music building before COVID,” Orth said. “Then, last year we were only remote, so we held Zoom rehearsals twice a week. We still were able to rehearse and feel like a community, but like any Zoom class, it feels like less of a real space.”

The virtual format was an obstacle that threatened the routine of their regular rehearsals, according to Orth.

“Over Zoom, it’s impossible to do any playing together … we would just do thirty minutes at a time of each section,” Orth said. “We made video recordings by each of us separately recording ourselves and our professor putting them together. You just had to make the best of what you had.”

Orth said he yearned for a return to the ensemble’s old ways, reminiscing about a time before the pandemic.

“My favorite thing about playing in a jazz band is getting together with a group of people and creating something, and that just didn’t exist over Zoom,” Orth said. “The concert isn’t the best part of jazz band to me — what’s fulfilling about jazz band for me is going in every week and rehearsing, hanging out with the people in the jazz band, and playing together.” 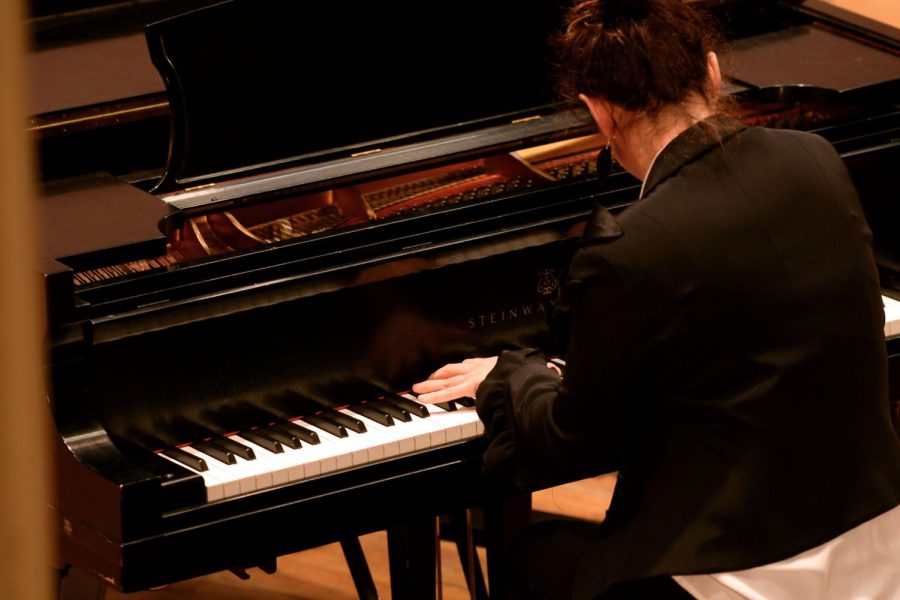 Ron Rohlsen, the ensemble’s student president and baritone saxophonist, is also enthusiastic to get into the swing of things. The ensemble met during the fall semester in a makeshift rehearsal space behind the Music Building. Rohlsen said the group has been easing back into its pre-pandemic routine.

“It had its ups and downs,” Rohlsen, junior economics and political science major, said. “There’s a lot of accommodations, and everything we need is in that room. It gets a little cold sometimes, but it could be a lot worse.”

Orth expressed his excitement to once again play together in the same room as his bandmates.

“Being able to get together and create music again is really great,” Orth said. “[Monday’s performance] is definitely a step in the right direction of bringing back the magic of live music, for the audience and performers.”

Despite last semester’s shortcomings, Rohlsen explained that the ensemble’s return to in-person rehearsals was preferable to the remote format.

“It was very, very inefficient, but it’s all that we had. For the perfectionists in the band, it could take hours to record your part, and if you messed up one thing, you had to start all over,” Rohlsen said. “I don’t know how [Guzzi] did it.”

The ensemble draws students from diverse disciplines, according to Rohlsen.

“For as long as I’ve been in the band, we haven’t had a music major in it. It’s really whoever. We have auditions at the start of each semester,” Rohlsen said. “If you come in, we have an opening, and we think you would be good to fit that opening, you get the spot.” 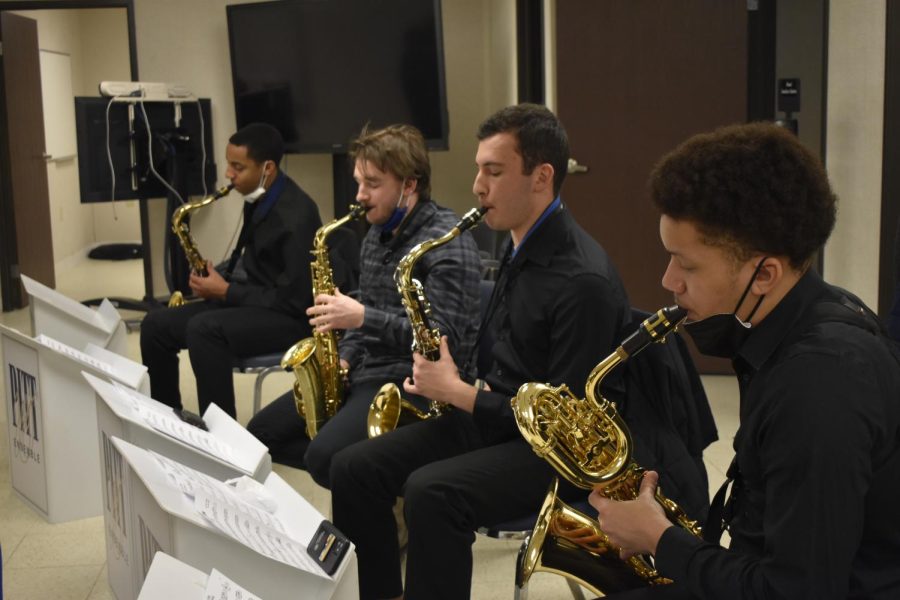 Rohlsen reflected on his leadership as president, and said he was glad to leave a mark on the ensemble.

“I send out a lot of emails, either reminders for upcoming concerts and rehearsals,” Rohlsen said. “I’ve been in the ensemble since freshman year, in my first semester here. It’s nice to know that I’m contributing to an organization I care about.”

Rohlsen said Monday’s performance represented more than a concert — it showed the ensemble’s resilience and dedication.

“To me, it represents an ability to persist past the difficult times that we’re all in,” Rohlsen said. “We get the chance to play, and the fact that we can do that shows that there is some kind of commitment to overcoming the obstacles.”

“Kicking off the Pittsburgh Jazz Seminar and Concert week will always mean a lot to me,” he said. “It’s a tradition I will always cherish,” Lipinski said. “I’ve been a part of this group since my first day at Pitt almost four years ago, and it has definitely been a highlight of my time here.”

Lipinski said he thinks the future of the student jazz ensemble is bright, particularly after all they’ve been through in the pandemic.

“I know the ensemble is in good hands with the younger students, and I’m sure they will keep the Pitt Jazz Ensemble alive and well,” Lipinski said.