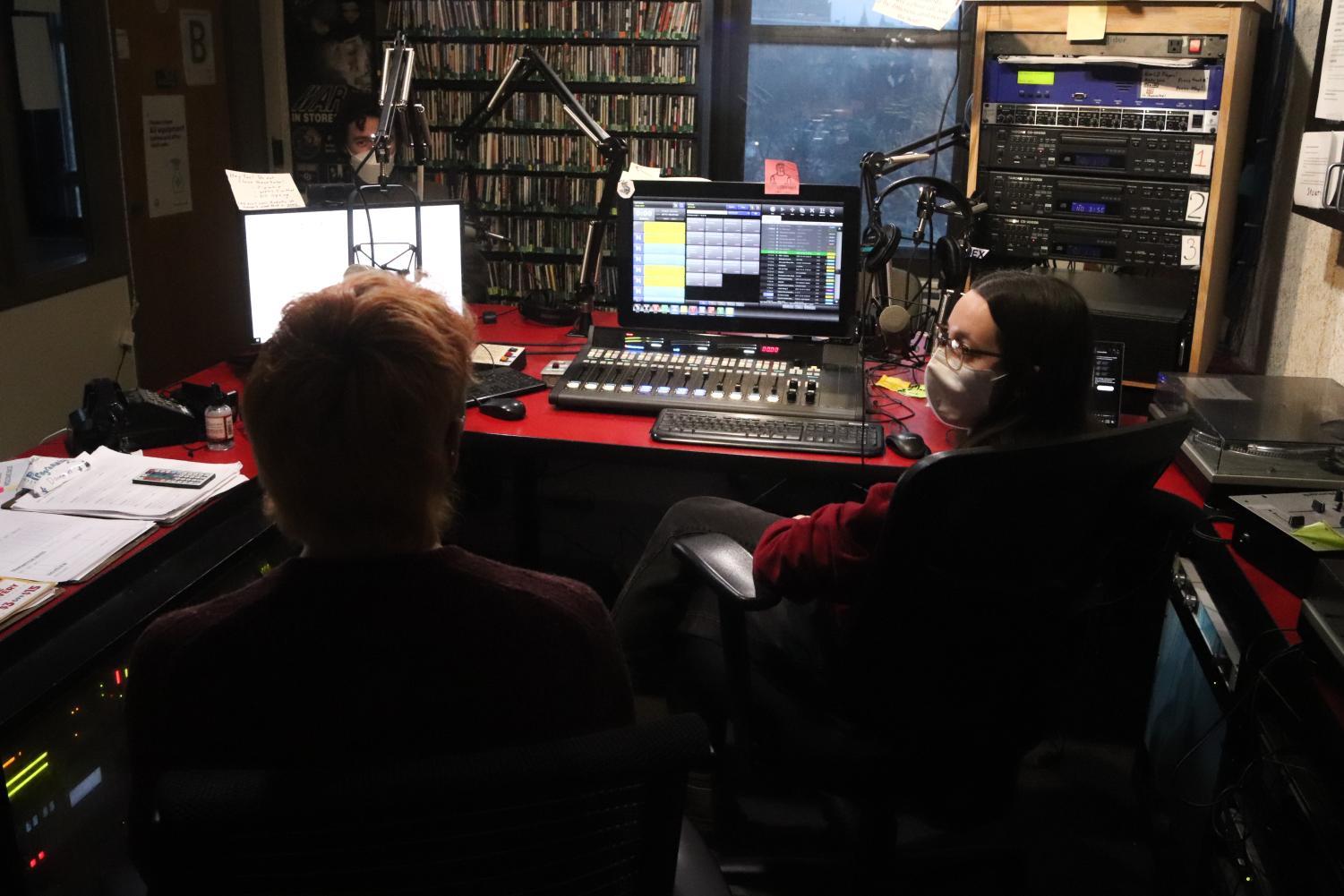 By Arianna Rios, For The Pitt News

According to Joanna Linares, the outreach assistant station manager at WPTS Radio, the environment and community that the station fosters is a big reason why she loves it.

“The friendships I have made at WPTS are the friendships you hope to build when you are on your way to move-in day for your dorm freshman year and are terrified of having to meet new people,” Linares, a junior applied developmental psychology major, said. “Even though this is technically my on-campus job, it never really feels like dreadful work because I’m constantly surrounded by people who are supportive, passionate, and radiate positivity.”

WPTS is Pitt’s on-campus radio station, founded in 1984, and is considered an “all hands on deck” student-run organization by the station’s managers. According to their website, WPTS is one of the “major” college radio shows in the country. Students and community members can tune in to the station at 92.1 FM or on iHeartRadio.

Evan Rubin, station manager at WPTS and a senior psychology and sociology major, said their mission is to provide the Pittsburgh community with new, engaging and inclusive radio shows for all.

“As a station our goal is to uplift the local community. From an external perspective this means platforming content, from music to sports to news, that is local and underrepresented,” Rubin said. “Internally, this means giving students the resources to work creatively. We want everyone to have the opportunity to influence our media output regardless of experience.”

Rubin said WPTS aims to ensure that everyone feels welcomed, and one of the ways they have tried doing this is by engaging with other students and local organizations.

According to Rubin, they have segments on Saturdays where the show is hosted by different student organizations and community members, sometimes in different languages, to emphasize the multitude of cultures in the Pitt community.

Despite Pitt allowing for fully in-person activities now, when the pandemic first started, the station faced many challenges trying to manage shows and projects, according to Olivia Marlowe, content assistant station manager.

“Such a big part of our jobs at WPTS involve creating personal relationships with our staff, facilitating a meaningful experience for them,” Marlowe, a senior urban studies major, said. “We suffered a huge loss in station culture and staff retention, and it became even more challenging to include both those who were integrated in station activities already, and those on the fringes of the station who we want to get to know more.”

Marlowe said she has gained numerous personal skills at the station, including learning how to DJ, creating meaningful content, and developing production skills.

“WPTS is special to me as I feel like I can see the impacts of my efforts right then and there — I can hear my voice on-air, hear the music that I love, and feel a sense that I’m doing something that matters in this moment,” Marlowe said.

Rubin said along with having passionate and creative station members willing to be themselves on air, a big part of what goes into producing radio shows is technical factors, such as sound. He said it is crucial that their mix and sound quality are professional so that their hosts and the music don’t sound “abrasive” to the listeners.

Yarmi Kalokoh, a sophomore in computer science and philosophy, joined WPTS as a DJ for her music show “Burnt Orange” in October. Kalokoh said part of her role as a DJ is curating weekly playlists with 14 songs that adhere to the station’s “format,” which includes manually censoring explicit content in songs before they are played on air.

“The job is honestly rewarding in every way, but I would say the most rewarding part is when people tell me they like a song I played or just the show in general.” Kalokoh said. “I work really hard in putting together setlists that are meaningful and diverse, and it is so fulfilling to have that recognized.”

During her show’s air time on Mondays from 2 p.m. to 3 p.m., Kalokoh usually multitasks, talking through the microphone during breaks, queuing up, playing ads and WPTS liner and playing the formatted songs. She also deals with technical responsibilities such as checking the mic and volume levels and switching between the automator and her laptop all while entering information into the system that controls the station’s playlist Twitter account. This account allows listeners to follow which songs are currently broadcasted.

“The atmosphere was incredible, and it was an experience I will never forget. If you think going to games is fun, imagine getting to broadcast them from the press box.” Randall said.

Kalokoh said all ideas are welcome at the station for students interested in becoming show hosts, DJs and genre directors at WPTS.

“The station is full of all kinds of personalities with different tastes in music, and that is what makes us so great! I know that the station — or radio in general — can seem intimidating, especially because of how much we get done around campus,” Kalokoh said. “But the atmosphere is so casual and friendly, I am really thankful that I get to be a part of it.”

Rubin said the environment at the station is fun and inviting, which also permeates into their shows and content.

“I love that we can make stuff that is casual and does not take itself super seriously,” Rubin said. “Our aim is to keep our content sounding professional but also represents the personalities and culture around the station.”