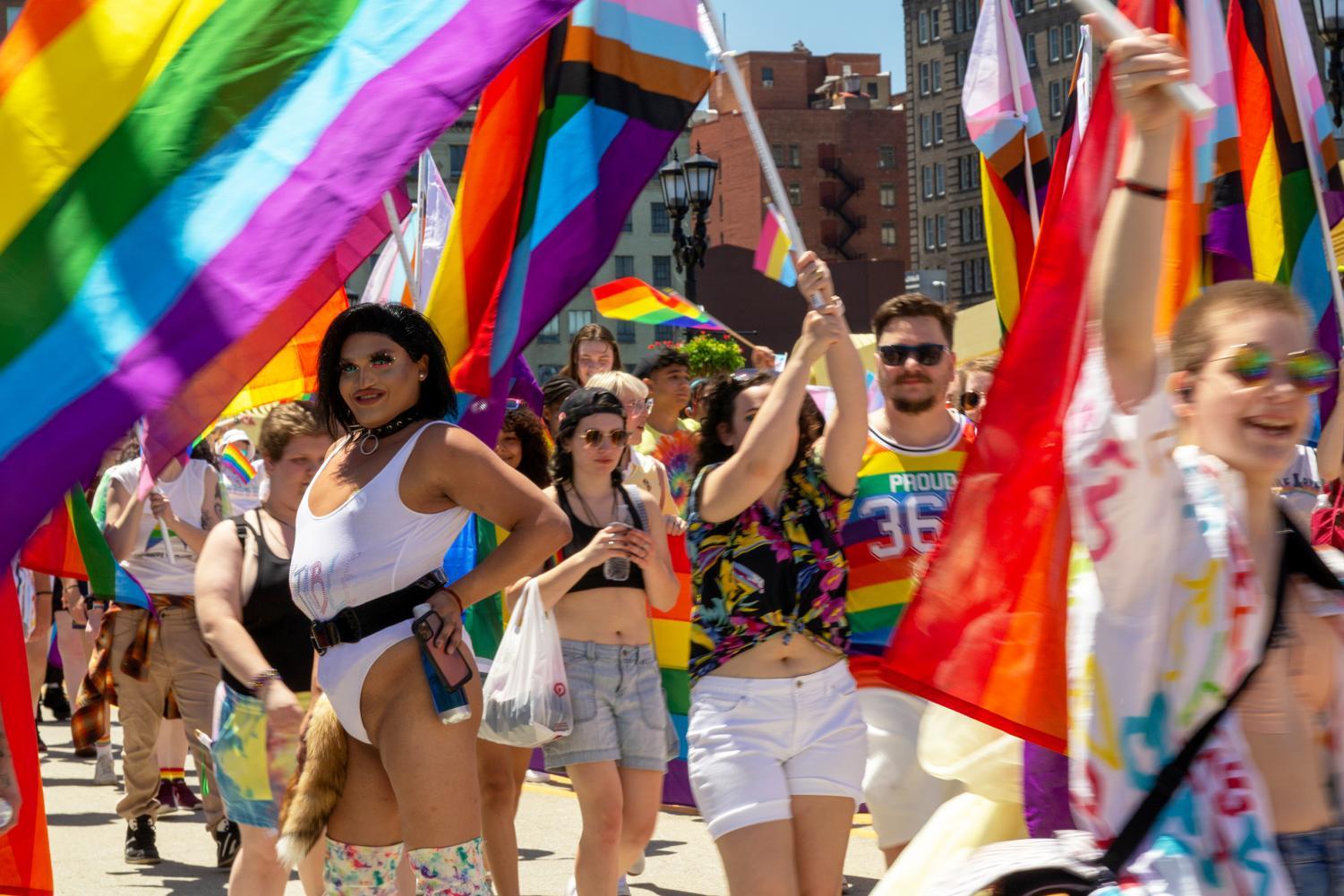 Tens of thousands of people swelled onto the street in front of the City-County building on Saturday morning. Spilling out onto blocks in every direction, marchers crowded in to listen to Mayor Ed Gainey and State House Member Summer Lee speak at the Pittsburgh Pride Revolution March and Parade. Local political leaders urged the crowd to pay attention to politics and exercise their right to vote, particularly in the wake of recent nationwide legislative attacks on transgender rights.

Ending on a hopeful note, Lee emphasized that attendees should “send a message to anyone who will look at us funny that we aren’t going to be defeated …the power of the people is always greater than the people in power.”

Following Lee’s speech, and with a growing hum of chants, a line of elaborately decorated motorcycles revved their engines and began the march. Behind them, a sea of flags moved forward like a wave. Chants of “Love is Love” volleyed back and forth between groups. A snow-white convertible cruised a couple of groups behind, carrying prolific Pittsburgh LGBTQIA+ icon and Grand Marshall of the march, Billy Porter.

After crossing Andy Warhol Bridge, marchers made their way down Sandusky Street. Hundreds lined up along the way with lawn chairs and coolers as the crowd marched on to experience the seemingly endless stream of colorful and diverse styles and signs.

Approaching Allegheny Commons Park, the chants and noise of revving engines became muddied with the sounds of two portable stages. Blasting upbeat music, children rapidly broke ranks and began to dance haphazardly in front. Many attendees made a beeline for the shade of the trees and water after their long walk. Vendors and advocacy groups lined the paved paths, including Stonewall Democrats.

Several attendees of the Pride parade echoed their appreciation for the display. KC, a Pittsburgh area resident, said though they’ve “been gay [since] out of the womb,” this year was their first time going to a Pride parade. They said seeing so many people express themselves together was “really cool.”

“I just like the thought of going to pride because I was never able to express myself as a kid,” KC said. “The parade — we watched the whole thing. I was very surprised at how many people there were, and it was really cool to see all that.”

Many attendees echoed this sentiment, including Pittsburgh resident Anna, who attended the march with two others. Anna said being online for two years made it easy to feel “detached from the community when you’re just chilling at home in a pandemic, but now you’re surrounded by so many people that either are very similar to you or identify similar to you.”

Another Pittsburgh resident, Sam, said they think it’s really “rewarding” and “inspirational” to hear older members of the LGBTQIA+ community talk about their experiences.

“I think it’s really inspirational to hear older people from the community talk about their experiences and how they feel is best to serve the LGBT community — it’s really rewarding to have that time to hear that.” Sam said. “Seeing this many queer people out here, it’s really affirming and comforting and really special.” 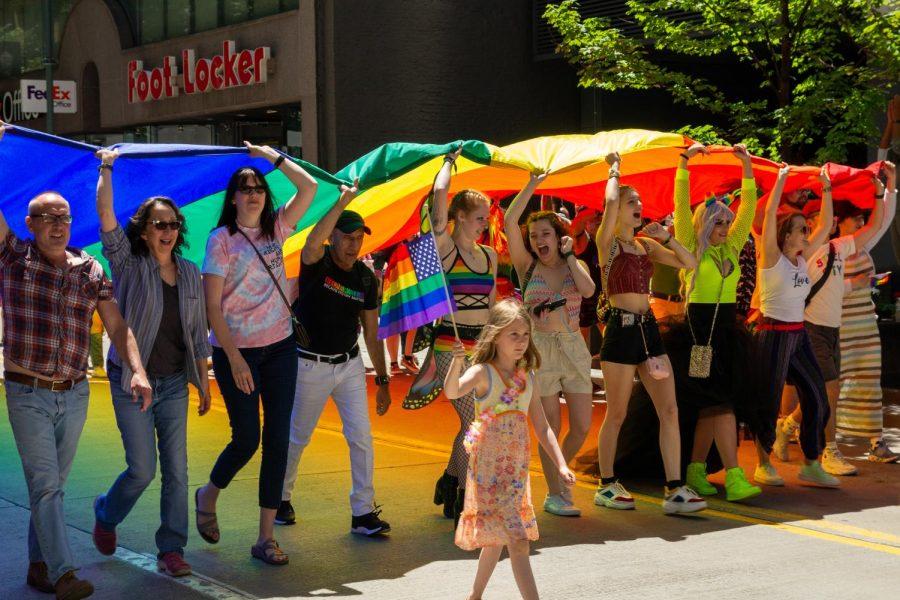 Once the parade arrived at Allegheny Commons Park, the focus shifted more towards LGBTQIA+ activism as speaker Billy Porter fired up attendees about the importance of voting. In between the stages were advocacy groups, craft vendors and places to purchase alcoholic beverages, allowing the event to cater to the attendees’ various interests.

The Pride parade acknowledged the increased political influences behind the parade this year and highlighted the struggles for trans youth. 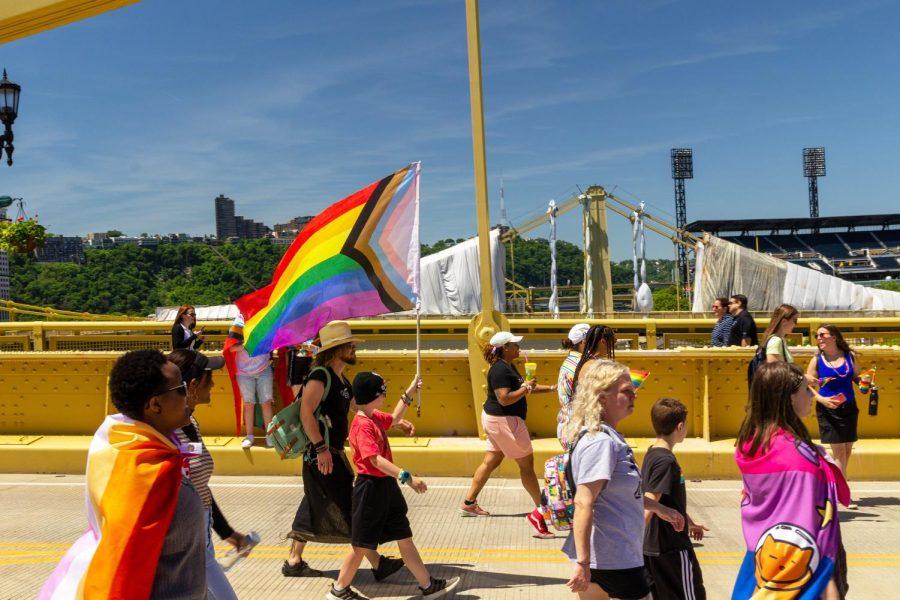 Sophie Beacom, a senior at Pitt, said the parade seemed more diverse and commented on the return to focus on political issues surrounding the LGBTQIA+ community. Beacom also noted that many of the first people who “fought for pride” were trans women. The Stonewall Riots, widely regarded as a major catalyst for the gay rights movement five decades ago, is closely associated with Marsha P. Johnson and Sylvia Rivera — both transgender women and civil rights activists.

“I think that I’ve seen a lot today that’s been so much more diverse and so much more visible compared to previous prides I’ve been to, such as in June 2016. That was the problem, we didn’t know what was coming. It was a different environment. People felt differently I think, and people acted differently.”

Beacom clarified that this shift from previous years was visible in the way people acted, calling the 2016 Pride march she attended “a celebration of comfort rather than a celebration of protest.”

“I think there’s an interesting balance struck today between the necessity of protest and the need to make real change in the movement, and the necessity to have the space to relax and celebrate and to know your identity and be seen,” Beacom said.