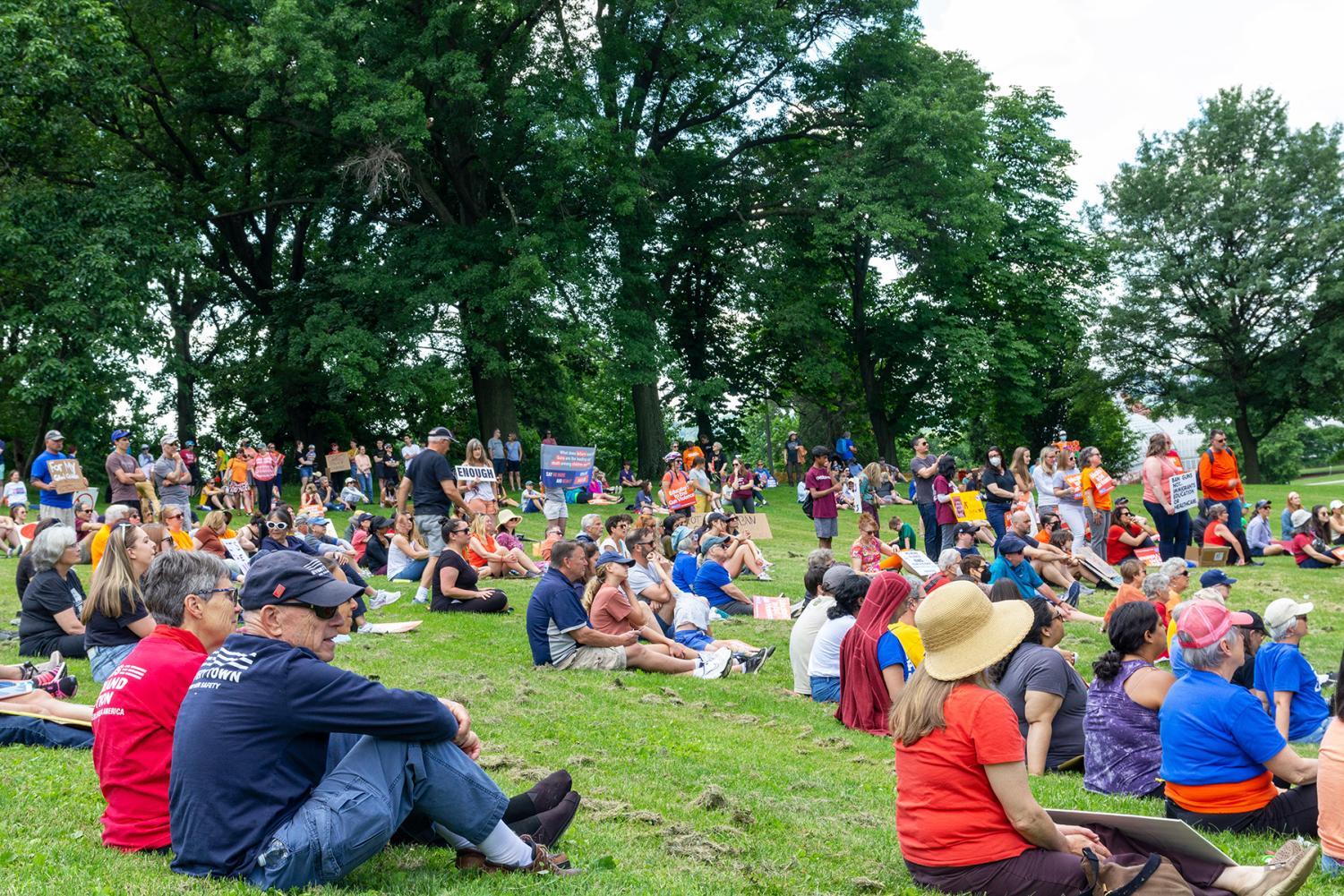 Attendees gather on Flagstaff Hill in Schenley Park during Saturday’s “March for Our Lives” rally.

Around 250 people gathered on Flagstaff Hill in Schenley Park on Saturday for the 2022 Pittsburgh March For Our Lives rally. Instead of the usual hammocks, frisbees and laughter that is often seen on Flagstaff Hill, the mood was heavy and relatively quiet. Parents held young children in hand, students arrived in small groups, and a handful of attendees arrived in uniform, seemingly on their lunch break. No music played, and hushed conversation reflected the weight of the events that brought many people together on Saturday.

The March For Our Lives movement began after the 2018 Marjory Stoneman Douglas High School shooting in Parkland, Florida, which resulted in the deaths of fourteen students and three teachers and staff. The movement has since centered on young activists who are directly affected by shootings in schools.

These young activists and students were at the front of the agenda across signs of attendees and speeches alike. The topic of guns was particularly sensitive following the recent shooting in Uvalde, Texas, where elementary schoolers were gunned down in their classrooms just days before their summer break. With high-profile shootings in Texas and New York among countless others fresh in mind, the rally started with a loud and passionate “boo” at the mention of notoriously pro-gun Senator Ted Cruz’s name.

According to Time, guns are the leading cause of death for children and teens in the United States as of 2020 for the first time in history. This rise in youth mortality was addressed by many speakers who wish to curb the violence.

Atop the concrete stage in the middle of the field, speakers lined up to address the crowd. A wide array of violence prevention, gun policy and community collaboration organizations fielded speakers, including South Pittsburgh Coalition for Peace, Moms Demand Action and Ceasefire PA.

Smith, a Baptist reverend, registered nurse and community activist, spoke about her experience as a nurse working as the violence and injury prevention consultant for the Pennsylvania Department of Health. Smith said police aren’t the sole answer to violence, speaking to the interventions and referrals done by her organization.

“There’s a lot of reasons for violence, and [we] address this. Homelessness, finances, jobs, mental health problems, even spiritual problems,” Smith said. “And they fill out referrals and they send them to our coordinator, our resource referral coordinator.”

Miri Rabinowitz spoke next, bringing the conversation down to the most local level — Squirrel Hill. Rabinowitz is the widow of Jerry Rabinowitz, one of the victims of the 2018 Tree of Life Synagogue shooting. Rabinowitz said losing her husband in such a violent way has caused her immense pain, especially in a sacred house of worship.

Rabinowitz urged officials in the Pennsylvania Legislature to do something to stop gun violence, rather than simply sending “thought and prayers.” She also urged people to vote.

With speakers both old and young, the crowd reflected the broad coalition of Pittsburghers concerned with gun violence. Luke Morales, a Pitt senior English writing major, said he was heartened by the diversity at the rally. With school shootings becoming commonplace over the last two decades, Morales said seeing so much interest outside of student advocacy is “encouraging.”

Morales pointed out the support for increased gun regulation among students, and said he has been involved in advocacy against gun violence since high school.

Rally attendee Jospehine Koltek said she had a very personal connection to guns and gun violence.

Koltek said her feelings originated from a mix of bad personal memories and a general distaste for gun culture in the U.S. Like many others, her time as a student left Koltek with traumatic gun-related experiences.

“I had gone to school with an army veteran who taught other veterans to be role models, but shot himself in the head during my sophomore year in college,” Koltek said. “The things I heard [at the rally] today were heartbreaking.”

As the speakers concluded, there was no catharsis. Attendees slowly made their way down Flagstaff hill quietly, with only a few lingering. A man with a sign played a slow rendition of “When The Saints Come Marching In” on his saxophone as people walked by, providing a somber soundtrack.

Smith urged attendees not to get discouraged by continued gun violence, and said those who wish to see a stop to the bloodshed must have faith in their fight.

“We must be steadfast in belief, and have faith that change is coming. Change must come. Faith is the substance of things hoped for. The evidence of things not seen — yet,” Smith said.“What we are doing in this movement to end gun violence is what my friend Jesse Jackson said — ‘Keep Hope Alive!’ We must continue what we’re doing and never ever give up. Never get tired until this gun violence pandemic is defeated.”