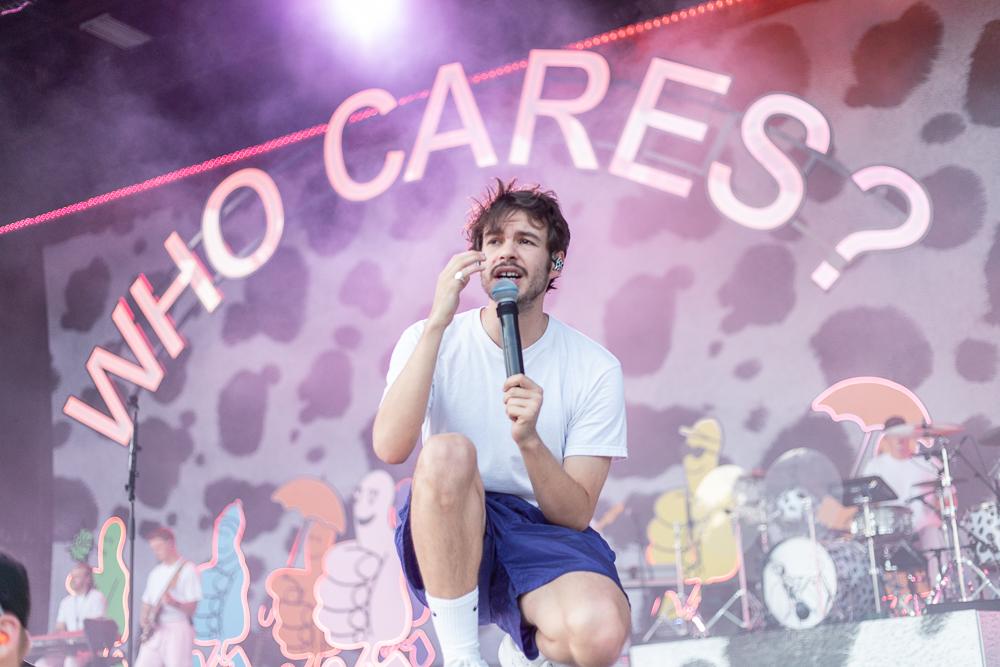 In the 90-degree June heat, thousands of fans crowded into the pit of Stage AE to see the one and only Rex Orange County. Sweat clinging to their skin, fans rushed to the steel barricade to get a closer look at the indie singer.

The stage setup included a piano sitting stage right, “PITTSBURGH” spelled across the front, and an array of the singer’s unique display of thumb characters, each showing different emotions. An overhanging display of ”WHO CARES?” shining above the dalmatian-print background sat center stage with an empty spot waiting for the singer. At 8:30 p.m, the lights dimmed, the playlist halted and the smoke machines began — it was showtime.

As a part of his “WHO CARES?” Tour, Rex Orange County made his first visit to Pittsburgh at Stage AE on Tuesday night. The alternative singer Alex O’Connor, known by his stage name Rex Orange County, began the concert with “MAKING TIME,” a track off his latest album “WHO CARES?”

Taking advantage of not having an opener, O’Connor had the whole set time to himself. Playing through new and old songs, to creative set changes, to one last final encore —the concert was definitely more than “WORTH IT.”

His album, “WHO CARES?” released on March 11 of this year. With songs like “KEEP IT UP,” “WORTH IT” and a collaboration with Tyler, The Creator on the song “OPEN A WINDOW,” Rex Orange County opted for a more upbeat bedroom pop feel with the album. Opting to slow down the pace in songs like “ONE IN A MILLION” and “MAKING TIME,” the album encompasses the singer’s style best.

Most known for his songs such as “Best Friend,” “Sunflower,” and “Loving Is Easy,” Rex Orange County is known for his alternative style of music, accompanied by his mellow voice and strong lyricism. Balancing upbeat music with sad lyrics and heartfelt emotion, the singer has the ability to pull at listeners’ heartstrings.

O’Connor transported fans back to his second studio album “Apricot Princess” with the song “Television / So Far So Good,” one of the classic hits off the album. Next up for O’Connor was “10/10,” an underrated hit from his third studio album released in 2019, “Pony.”

Fans were more than excited to get a blend of Rex Orange County’s discography. It was a trip down memory lane of sorts with a focus on what lies ahead for the singer with this new album. Even with all of the nostalgia, Rex Orange County ventured back to his latest album, playing the song “7AM,” one of the more upbeat tracks.

Sitting at the piano, the singer also gave fans a new cover to obsess over as he serenaded the crowd with the classic Minnie Riperton ballad, “Lovin’ You.”

Entering the halfway point of the show, O’Connor began to switch things up a bit. A black curtain cut the stage in half, making the bright set design disappear. With just his microphone stand, guitar strapped to his chest and piano waiting, the fans had O’Connor all to themselves.

Playing a quartet of some of his slower songs, the crowd enjoyed O’Connor’s smooth vocals and strong whistling — a skill that impressed the crowd. This vulnerable moment between the singer and crowd allowed him to revisit his first album, “Bcos U Will Never B Free,” which sparked his rise to fame. From the album he sang the famous track, “Corduroy Dreams.”

The singer switched things up for the crowd again, displaying a completely different set design with the track “OPEN A WINDOW.” Gone were the thumb characters, and in were a colorful assortment of flowers, each with their own disco ball. Ditching the dalmatian-print background, the singer’s set now had a white background, allowing the rainbow colors to stand out.

Despite the crowd’s hearts racing, feet hurting from jumping and throats burning from singing along, Rex Orange County still yearned for more from the Stage AE crowd. O’Connor stopped before moving to his next song, calling out the energy of the crowd. Wanting more, the singer asked the crowd for all of their energy on the upcoming song. An electronic keyboard intro was the perfect cue for the disco balls to begin spinning. The concert became electric with fans screaming out the lyrics and dancing their hearts out.

The singer created a special moment with the crowd during his 2017 hit “Best Friend.” O’Connor had a special request for the crowd – no phones. Wanting his fans to get the best experience possible and make the most memories, the singer asked the audience to have no phones out for the rest of the song. Not a moment later, O’Connor returned to playing the crowd favorite track. With no phones in sight, all eyes were solely on him.

Switching from one classic to another, Rex Orange County gave the crowd another nostalgic hit, “Loving is Easy.” But that’s not all that happened. With the upbeat track playing and lyrics flowing, beach balls, all branded with the singer’s special thumb design, were thrown into the crowd. As the crowd began to jump to the beat, the singer allowed for some solos from each instrument including the saxophone and guitar. As the clock neared 10 p.m, the crowd realized the performance was coming to an end.

Rex Orange County closed the night out with the album’s title track, “WHO CARES?” With the crowd on their feet, O’Connor asked them to sing louder. Nearing the end of the song, the crowd wished to stay with the singer longer. As the last verse of the track came, the singer bid his farewell to the Pittsburgh crowd.

With the stage now empty, the crowd remained on their feet. A low murmur of “Encore! Encore!” moved its way through the crowd, switching to a loud chant of “‘One more song! One more song.” A few seconds later, screams from the front signaled that Rex Orange County was returning to the stage.

Rex Orange County came back to center stage for a final song, ready to sing his heart out one last time. As the lights dimmed with only the disco balls providing light, the singer began to play his popular track, “Pluto Projector.” Little by little, Stage AE became illuminated with fans’ flashlights swaying to the ballad. Nearing the end of the song, the singer asked the crowd to sing the fan-favorite track. With just his guitar strumming, all that could be heard was the crowd singing out the chorus as the flashlights continued to sway.

With the last verse, Rex Orange County bid his farewell, making a promise to be back in the future. Bringing his beautiful voice, strong lyrics and amazing stage presence, Rex Orange County’s first visit to Pittsburgh was one that many will never forget.