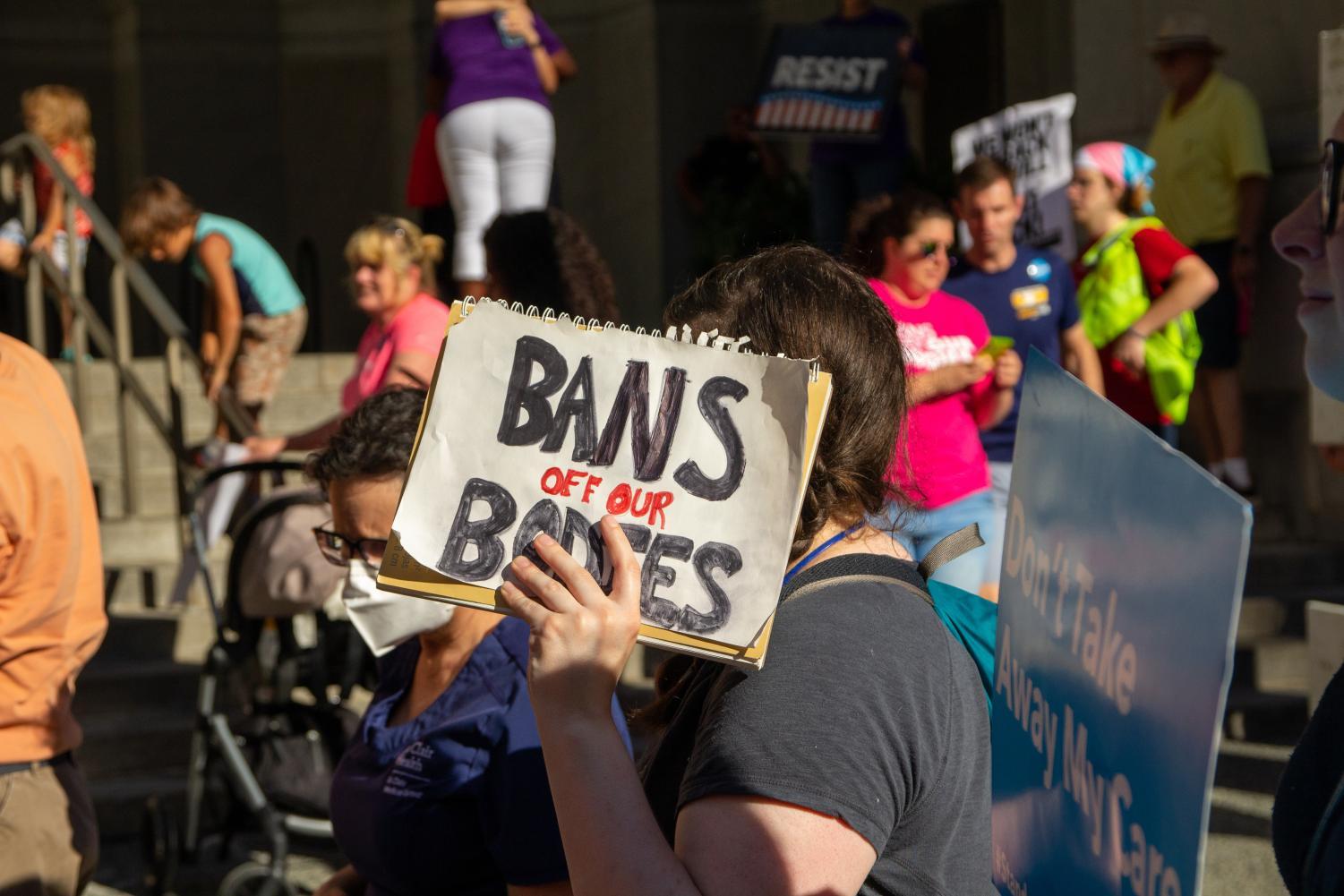 A protestor carries a sign that reads “Bans Off Our Bodies” outside of the City Council Building in Downtown at Friday’s Women’s March. (John Blair | Senior Staff Photographer)

A protestor carries a sign that reads “Bans Off Our Bodies” outside of the City Council Building in Downtown at Friday’s Women’s March.

“Need to fight back”: Pittsburgh rally speaks out against the Supreme Court overruling of Roe v. Wade

By Allison Radziwon and Bella Markovitz

The Supreme Court overturned the landmark court ruling of Roe v. Wade on Friday, removing constitutional protections for abortions. This decision allows several states to entirely ban abortion through state legistlature. In light of the ruling, many Americans took to the streets in defense of reproductive rights. In Pittsburgh, hundreds gathered in front of the City County building downtown to protest the landmark case.

Jacob Jones, an incoming student at Kent State, said people need to “take back their rights they rightfully deserve.”

“It’s time that we take back what is the foundation of this … country. Democracy needs to be put in place, and people need to have the reproductive rights they’re born into,” Jones, a Butler resident, said. “We need to stop placing trans people, queer people and women of all shades and sizes into boxes that allows them to get their rights ripped away by … white men who do nothing but sit … and oppress minorities.”

A University spokesperson said Pitt will focus on the needs of the community during this time.

“​​The University recognizes today’s Supreme Court decision will have wide-ranging impacts across the country,” the spokesperson said. “Like many others, we’re assessing how it may impact our community members, and our focus, right now, is on our students and employees and their needs and questions.”

Boomba Nishikawa, a University of Toronto student and Pittsburgh resident, said the leak of the Supreme Court draft in May made the overturning of Roe v. Wade “clear.”

“Democrats had eight years to codify [Roe vs. Wade]. Ruth Bader Ginsburg could’ve stepped down after she had been treated for cancer but she selfishly stayed in. Then we have Biden, who also promised — that was one of the few promises in his term, but now he’s gone over it,” Nishikawa said. “There were two months where we knew this was coming out, they could have codified it then, and still nothing has happened. The only legislation we’ve seen after the leak was that they protected the Supreme Court justices.”

The overall atmosphere of the rally echoed the feelings of attendees, with speakers expressing their outrage over the overturning. A spokesperson from Justice for Jim Rodgers, a group advocating against police brutality, said “we are angry”.

Theresa Nightingale, a resident of Squirrel Hill, said the news “knocked the wind right out of her”.

“I’ve been cycling between crying and being angry all day,” Nightingale said.

Nightingale said she believed protesting was the best way to raise awareness.

“I hope people actually get out and join us, and take to the streets,” Nightingale said. “Taking it out into the streets and actually talking to people that they know and that they don’t know about the issues, and being a little more aggressive than they have in the past, I think is best.”

“Voting is important, but it isn’t enough. People are going to die between now and November if this continues,” she said. “We’ve gotta be out here in the streets, we’ve gotta show our government officials that this isn’t acceptable, this isn’t okay and they can’t take our rights away from us like this.”

Several politicians also spoke about the overturning of Roe, with many Democratic leaders opposing the landmark ruling. Many Republican leaders spoke in favor of the overturning.

Pittsburgh Mayor Ed Gainey denounced the ruling in a press release, saying it’s “an attack on civil and human rights”. He said he will defend the right to an abortion in Pennsylvania. He also attended Friday’s rally in defense of Roe.

“Abortion is healthcare and denying the right to bodily autonomy of women, trans men, non-binary, and disabled people in America is stripping them of their fundamental right to privacy. Abortion is still legal in Pennsylvania and I will do whatever it takes to protect and defend that right in Pittsburgh and across our entire Commonwealth,” Gainey said. “We must ensure that people can make decisions about their bodies, their lives, and their futures and all of us must recommit ourselves to the work of making America more just and equal for everyone.”

Pennsylvania Governor Tom Wolf said in a statement that abortion “will remain legal” in the state for the rest of his term.

“A decision by the Supreme Court on Roe v. Wade will not have an immediate impact on Pennsylvania or its current laws,” Wolf said. “Should this opinion become final, abortion access in Pennsylvania will remain legal and safe as long as I am governor. I will continue to veto any legislation that threatens access to abortion and women’s health care.”

The Abortion Defense Committee of Pittsburgh, who organized the rally, said in a statement that they see the overturning as a “direct attack” on lower class Americans. The rally also expressed open solidarity for people of color and LGBT people.

“We see this vote as a direct attack on working class and poor people who need access to abortion care and will be the ones to suffer the most as a result of this decision. The ADC stands in solidarity with abortion care workers and abortion advocates who will also suffer from this attack,” the statement said. “We call on the people of Pittsburgh, the United States and the world to organize and defend the right to abortion against this attack on our reproductive rights by the United States government and the politicians who protect it.”