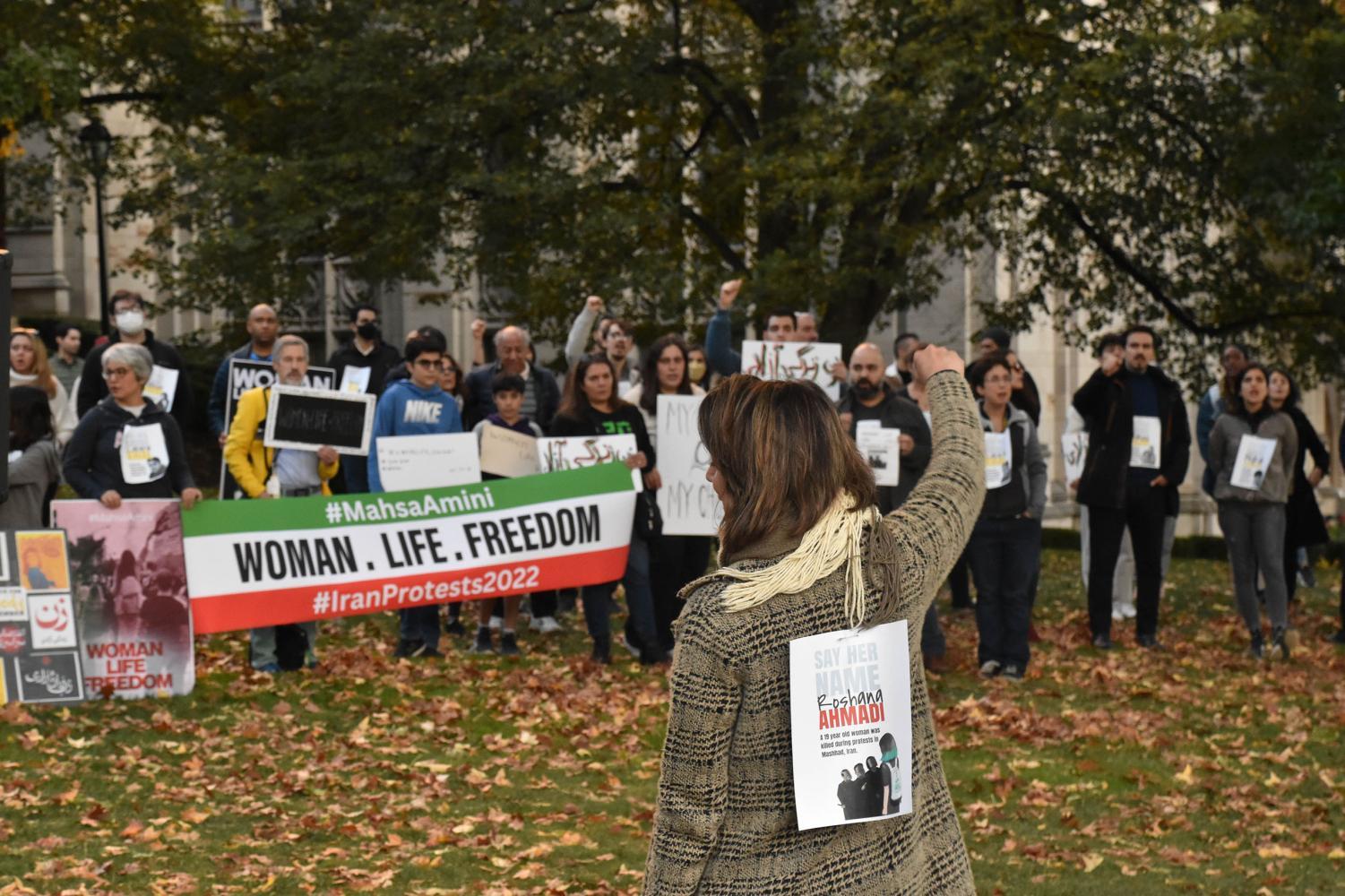 A crowd stands in solidarity with the people of Iran outside of the Cathedral of Learning on Oct. 24. (Amaya Lobato | Staff Photographer )

A crowd stands in solidarity with the people of Iran outside of the Cathedral of Learning on Oct. 24.

‘Be our voice’: Students protest the Iranian regime, ask for support from the Pitt community

About 80 students gathered at the Cathedral of Learning lawn on Friday to protest the Iranian regime and stand in solidarity with Iranian women.

Human Chain PGH organizers organized the event and gave speeches. The protesters also formed a human chain to symbolize the “unity of people” who are against the actions of the Iranian regime.

The protest is in response to the death of 22-year-old Mahsa Amini who was beaten and killed by the Iranian “morality police” for allegedly wearing “improper hijab.” Following Amini’s death, thousands of Iranians, primarily women and students, protested the Iranian government and were met with violence and arrests from the Iranian police.

People around the world have also protested and held rallies in solidarity with the Iranian people, including a candlelight vigil at Pitt earlier this month that mourned the death of Amini and other women killed by the “morality police.”

Kinan Moukamal, the co-president of  the Middle Eastern North African Student Association, said part of the reason he and fellow students attended the protest was to protest the University’s lack of a statement about the situation in Iran.

“It’s just really disheartening because it’s like, you know, that these things are happening, and they choose not to say anything,” Moukamal, a senior computer science and linguistics major said. “And I say the word choice purposely because it’s a choice to stay silent, and their silence is deafening.”

The Middle Eastern North African Student Association sent a letter to Chancellor Patrick Gallagher Thursday afternoon urging Pitt to release an official statement on the “ongoing atrocities in Iran and the Iranian fight for freedom.”

“Pitt must utilize its influence and power as a global University focused on ‘making lives better for people everywhere’ to amplify the voices of Iranian women as they fight for freedom and must continue to do so in future humanitarian issues as well,” the letter said.

Moukamal, one of the authors of the letter, said it was “stressful” for Iranian students on campus to deal with not being heard and worrying about their families.

“It’s really frustrating because like, at the same time, the students are dealing with stress and the trauma of what’s going on in Iran, and they have to organize things like this to make people hear about it, because the University isn’t saying anything,” Moukamal said.

Amir Zan, a sophomore philosophy and political science major, who has family in Iran said protesting the University’s actions was important to provide “help” to Iranian students.

“For being a student from Iran, if you have to take a stand in government, it’s not the type of student life everyone has, and there is nothing wrong with that,” Zan said. “We are just trying to get some support and some allowances for the students who are worried and distracted by what’s going on and are busy helping the people of Iran.”

Layla Banihashemi, an assistant professor of psychiatry at the University, said it was “critical” for people to support Iran.

Banihashemi also said she hopes students walking by the protest can help “give a voice” to the Iranian community.

“Iranian people are just asking to be their voice and to amplify their voices and to spread the word about what’s happening there,”  Banihashemi said. “And that’s really all we’re asking for here too, is just for students to be our voice and for our voices to be heard too.”