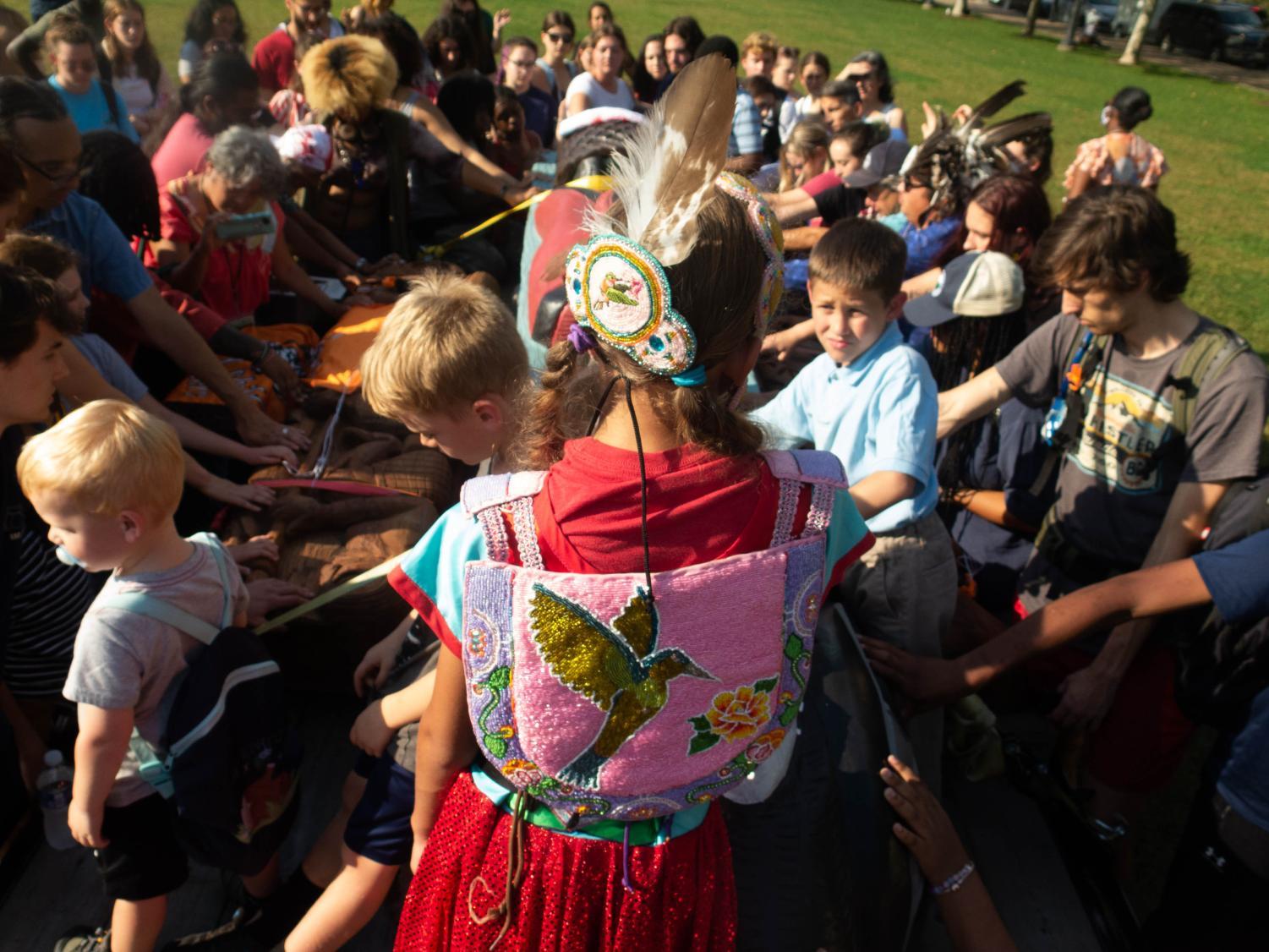 A Council of Three Rivers American Indian Center youth dancer watches as a crowd gathers to touch a totem pole and honor the earth together at a mini pow wow in Schenley Plaza on Wednesday. (Clare Sheedy | Assistant Visual Editor)

A Council of Three Rivers American Indian Center youth dancer watches as a crowd gathers to touch a totem pole and honor the earth together at a mini pow wow in Schenley Plaza on Wednesday.

The rattle of bells and the pounding of drums jingled and boomed through Pitt’s campus as Native American dancers and artisans converged upon Schenley Plaza for a pow wow on Wednesday.

The pow wow, a traditional display of Native American culture and heritage, was part of Pitt’s Indigenous Cultural Festival. The weeklong festival featured events like lessons on Inuit sculpture, educational exhibits in the Global Hub and Hillman Library, and the launch of Pitt’s official land acknowledgement.

Pitt partnered with the Pittsburgh Parks Conservancy and the Council of Three Rivers American Indian Center, a local organization dedicated to serving Native Americans in the Pittsburgh area, to bring the pow wow to campus.

“A pow wow, to us, is a chance for us to come together with family and friends and share stories, share culture, and dance and sing,” Simms said. “For the public, it’s their chance to learn about our culture and know who we still are as Indian people, as well as experience Native American food and also our Native American craft vendors.”

The pow wow began on Wednesday morning with Mark Tayac, the hereditary chief of the Piscataway Nation based in Maryland, addressing an audience standing around a circle of hay bales. Tayac called for solidarity among Native Americans, saying their culture is still alive across the Americas.

“Here in the United States, as American Indian people, we represent over 500 different nations and tribes. Many of our people have different languages, different customs, different traditions — we’re very diverse through our traditional homes, languages, cultures, traditional governments, economics — but we do believe that we are all one people,” Tayac said. “We represent, as Native Indigenous people, every inch of land within the whole western hemisphere.”

Emmanuel Todd-Barajas, a men’s traditional dancer of Choctaw and Seminole descent, said he has celebrated his ancestry through dance since he was 8 years old.

“It felt really good to dance, to be able to do that, as we were able to for many years — keeping the traditions alive is something that’s really important to me,” Todd-Barajas said. “There are a lot of misconceptions as Native people that we deal with in the media, deal with in life. It’s good to teach the public about Native culture and what we really are — that we’re still here in the city of Pittsburgh as well as all around the world.”

The event, COTRAIC’s first at Pitt, was hosted in anticipation of the council’s 43rd annual pow wow in Dorseyville this weekend. Pitt will offer a free shuttle to the pow wow on Saturday morning. Simms said pow wows take place all across the country, from tribal lands to state parks, but COTRAIC chose Schenley Plaza so that the organization could reach out to Pitt students.

“For Pitt students, it will give them a chance to see and learn our culture firsthand instead of just through a textbook, or through what Hollywood has made of our culture, which is not accurate,” Simms said. “This is our chance to share who we are and how we fit in today’s community.”

Students who stopped by the pow wow could also browse crafts from a variety of vendors, each of whom represented elements of their Native American heritage in their products.

Rachel Sadowski, a vendor from Michigan who sold handmade soaps and medicinal herbs at the pow wow, said she was there to channel her culture and dispel myths about her people.

“I am a soap maker. I make all my own soaps — I have lotions, lip balms, lotion bars, I have medicines out and available, I have shells,” Sadowski said. “People need to know that Native Americans are still here … we are not a mascot, we are not your costume for Halloween.”

Simms said prominent displays of cultural heritage are crucial to maintaining the Native American identity in the United States.

“All kinds of heritages have certain months and days, and they’re very well celebrated, where November is Native American Month, and there’s some people that do things for that, but it’s not as broad as other groups, especially in the Pittsburgh region,” Simms said. “We’re still here, we still have an active Indian community, and we’re still working towards identifying as ourselves and not being mixed in with other people.”

The foremost purpose of the pow wow is education, Simms said, but entertainment is also a factor.

“The overall goal is definitely [to] inform college students, staff and faculty as well as the public … it’s to inform and educate them as who we are, but also give them a little bit of entertainment,” Simms said. “It’s a wow factor to watch how our culture has evolved.”